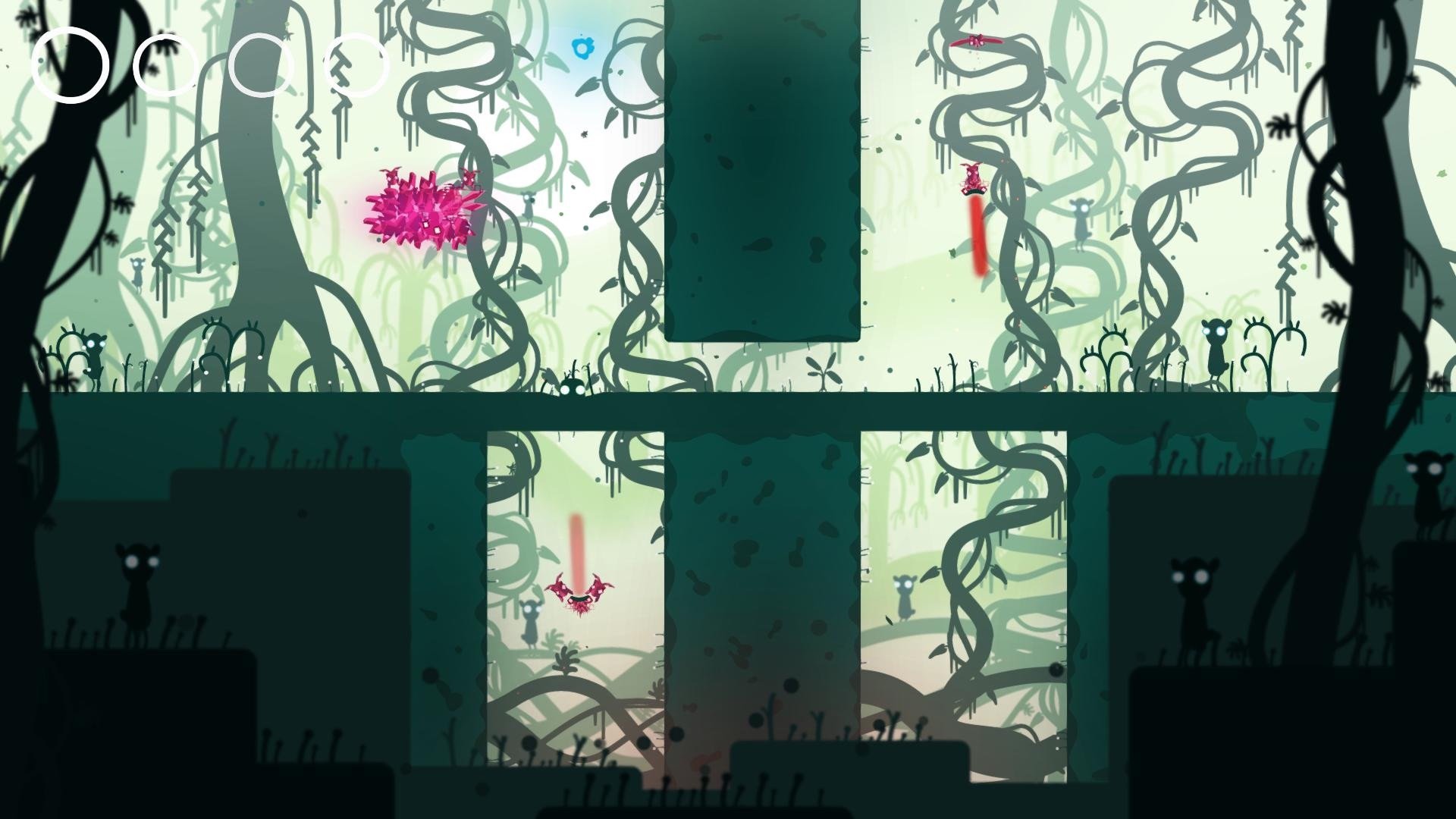 Semblance might be the perfect match for Nintendo Switch. Although this cool indie game from Nyamakop will also release for PC and Mac this year, its art style and gameplay scream Nintendo.

Part of this has to do with the fact that Semblance is a 2D platformer, a genre of game synonymous with Nintendo and the company’s Super Mario Bros. franchise, but it’s also the kind of game that we envision playing in short bursts and for long gameplay sessions, be it on flights, bus rides, and basically anywhere we take our Switch systems.

Most importantly, and based on the short demo, Semblance appears to be one hell of a game. In one respect, it shares similar objectives to other titles, like gathering collectibles and solving puzzles to open doors. But it’s how you achieve these things that will help set this game apart from the competition, as you literally deform the terrain to hit hard-to-reach switches, and propel the oval-shaped character across razor-sharp looking spikes.

It’s one of a handful of games that, upon seeing it in motion, we immediately wanted it available to download right now; a physical version also sounds like a great idea. On that note, we caught up with one of Nyamakop’s developers, Ben Myers, at BIG Festival 2018 in São Paulo, Brazil, to learn more about Semblance, and a few words in Afrikaans for good measure.

How did you wind up in Brazil?

Our company’s mantra is 90 percent of success is applying to things. For the last 18 months, one of my main roles was to apply to pretty much everything. We apply to festivals all the time. This year, somehow, we were nominated for three categories at BIG Festival, against games like Frostpunk and Dead Cells, which is overwhelming. I’ve always wanted to come here because it’s nice to attend events in the global south. We get to see how things are different and similar.

Many Brazilian developers who we spoke to mention the fact that there’s government funding to help them finish their games. Does that also exist in South Africa?

Tell us more about the name of your studio, Nyamakop.

[Editor’s Note: We initially pronounced this as Nyamacorp.]

Nyamakop, not Nyamacorp. People make that mistake all the time. It’s funny. It’s the combination of two African words. “Nyama” is meat in Swahili, and “kop” means head in Afrikaans, so it’s meathead. So when you say Nyamacorp, I think it’s funny because that’s meat corporation.

Both times that we met, you spoke about South African pride. I want to hear more about this.

We’re a very small game dev scene, about 500 people, but we do a lot of interesting stuff. There are some really big game successes coming out of South Africa, such as Broforce. Yes, the most American game ever made came from South Africa.

Then we also have games like Viscera Cleanup Detail, and Desktop Dungeons, which beat Minecraft for the IGF Excellence in Design award in 2010, so we have all of these successful games from South Africa. And what’s interesting is that a lot of the games that do well from South Africa are satirical and parody the west, and then we sell it to them.

That’s quite funny. There’s this great phrase in South Africa, “Soutpiel”. That’s what Afrikaans used to call English people. It means that you have one foot in England, one foot in South Africa, and your genitals hanging in the ocean, so you have a salty penis, basically. It’s provocative in a way that is quite interesting, because I found, particularly with white South African game creators, that they are generationally European, but currently African.

They don’t have an identity that is strongly tied to where they’re from. They make these games… and they clearly understand the western culture and its symbology. Broforce, for example, is very much an embracing of 80s and 90s action movies, but because the developers are not quite part of that culture, they also have this sort of rejection and satire. It’s like, “we want to be a part of this thing, but we don’t necessarily agree with it, so we’ll make fun of you.”

How did you get into game development?

I was studying for a game design degree in South Africa, at the University of the Witwatersrand in Johannesburg. It’s where Nelson Mandela went to university, so it’s pretty good. [Laughs] In my final year, my friend was working on this game and I was like, “this is really cool, can I make levels for it?” We showed it to the external examiner. He is this awesome triple A developer.

You see his name when the credits roll in Uncharted games and The Last of Us. He suggested we make this into a commercial game. And that was back when Semblance was about the character changing shape. It wasn’t as interesting as it is now. We sort of fell into working on this game as a professional project.

There was this rolling momentum where I traveled a lot, met a lot of people, ended up getting a publisher at Good Shepherd Entertainment, and now here we are in São Paulo!

How long has Semblance been cooking?

It’s been about three years, but we usually say 18 months because that’s the time that we spent on it professionally. But it’s been three years since that university occurrence.

Can you describe Semblance a bit? What’s it about?

That’s why we call it the first true platformer. It’s also a ridiculous thing to say, but in order to make a platformer in this day and age, you have to go hard. The more tamed pitch is that it’s a puzzle platformer in a world made of clay-doh. We can’t say Play-Doh because we don’t want to get sued.

What was your inspiration in creating this game, despite all platformers up until this point being a lie?

Divine inspiration, actually. Divine technical inspiration. I say that because the entire mechanic of deforming terrain came from a bug, a glitch. The whole game was about the character changing shape. We wanted the world to feel soft with this soft character, so we worked on these little impressions along the ground.

We had this bug where if you touched something, the platform would go down lower. The programmer, he’s known as Sugar, Tweeted a gif of this, and people were like “wow that is an amazing feature.” He was like, “yes, that is exactly what I was going for!” At that point his pride was on the line. There was no going back.

He went off into the woods, did some things we don’t like to talk about, and when he came back, this amazing tech was working. No one had ever done platform deforming, so we had to figuring out what made it interesting. What could the player do with this?

Did you have discussions internally about whether to reveal that this was originally a glitch?

No. I think it makes for a good story to talk about. It also makes us humbler. Instead of us being these all-powerful developers, like prodigies, it’s interesting that something that wasn’t designed is what the game is about. In some ways it’s more interesting than being a prodigy, because it shows a humbleness and realization that fun comes from unexpected places.

We kept that mindset the whole way through development. We’re making these systems, and if you make an interesting enough system, you can’t possibly understand every outcome. You need to be humble enough to say, “I don’t know what could possibly happen in this thing that I made.” If you get to that point of having this awareness, with stuff happening that you didn’t expect, you go down this path of discovery.

Did you always intend to bring Semblance to Switch?

This happened during development. We were like, “the Switch is coming out, lots of people are hyped about it, and that’s awesome.” We never realized, after doing some research, that we’re probably the first African developed IP to release on a Nintendo console, ever. That’s pretty cool, so we had to make this happen.

How was Nintendo to work with?

We had some pretty good reps that helped us across different regions. They are really good. Even when the process was working against us, the reps said, “We really like you guys. We really like the game. We’ll help you figure it out.”