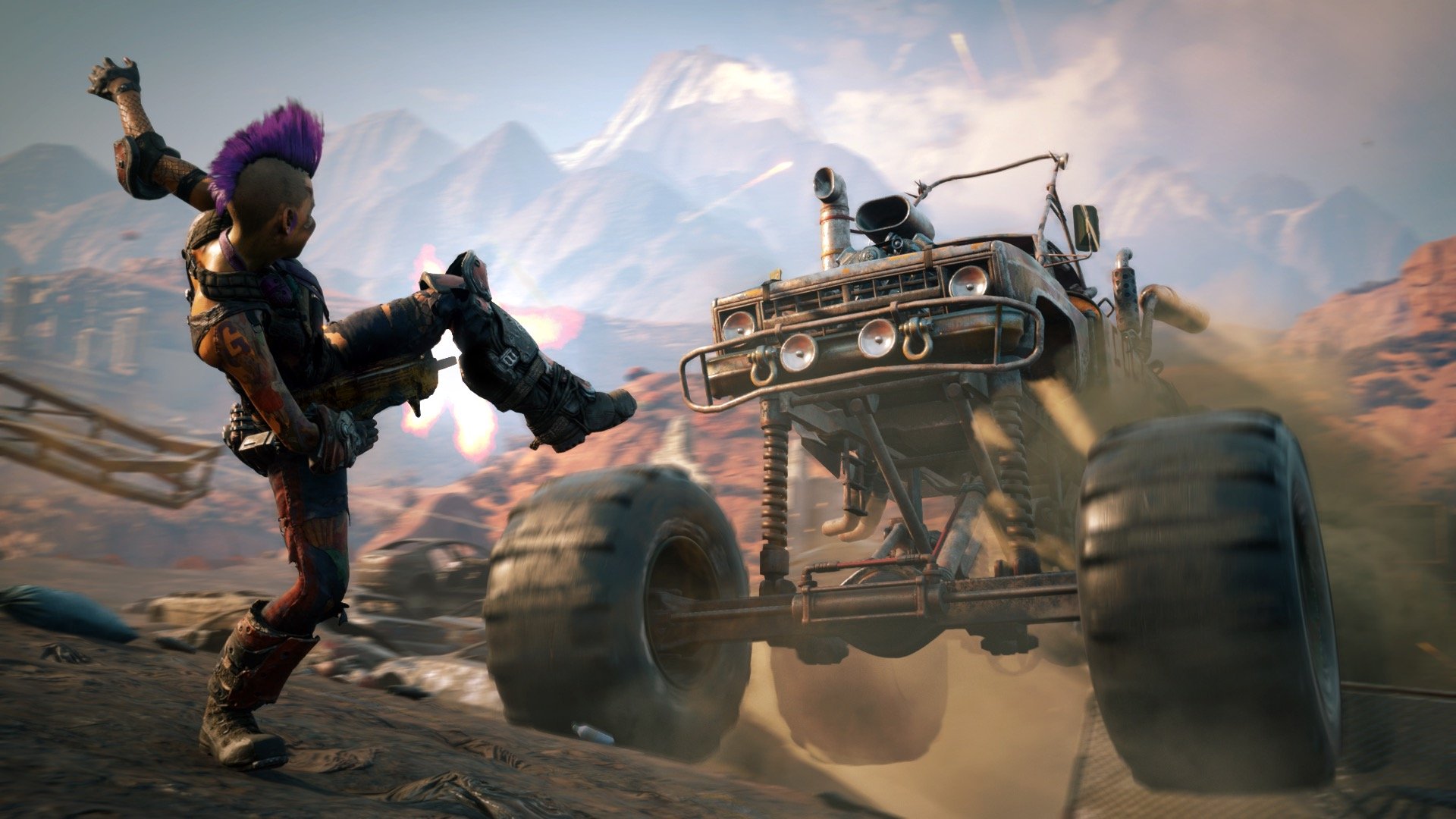 A lot of the time in an open-world setting, the temptation is to slow the pace and stalk our prey; to see how sneaky we can be. This isn’t Avalanche Studios’ style. The rocking Stockholm team brought us the Just Cause series (2006 –) and Mad Max (2015), both encouraging fast-paced total destruction. Imagine what something like this would be like with DOOM Slayer doing his thing in the eye of the storm, and you’ve a pretty good idea of what to expect from Rage 2. It could, and should, be the greatest bar conversation turned reality.

First thing you need to know about Rage is that it’s a single-player only experience. Since ‘nobody’ (maybe a few thousand) bothered to play the vehicle combat PvP in the 2010 original, but ‘many’ (millions) enjoyed the single-player exploits of ex-marine turned far-future freedom fighter Nicholas Raine, this is the route we are happily taking in Rage 2.

Events take place 30 years after Rage, and there’s a new lead protagonist in the wasteland – a ranger called Walker. He has a massive chip on his shoulder regarding the Authority, a faction who still seek to control the wasteland’s Survivors by mostly foul means. This militarized organization had Walker’s parents murdered, while mutant creatures have taken everyone else close to his heart.

Whereas Raine was finding his way after emerging from his Ark, Walker is all too familiar with the wasteland. As its last ranger, he’s decided to take the law into his own hands and turn all that hate and fear against every enemy human and mutant standing between him and the Authority.

It’s a solid reason to head out in any and every direction in the hope of restoring Earth and humanity. And how will Walker achieve that goal? By shooting things, of course.

For reasons yet to be explained, Walker can boost his core capabilities far beyond the basic health-regen that we got with Raine. This is where the DOOM influence is most apparent, with Walker gaining abilities such as Shatter, Pound and Dash that are fairly self-explanatory and surprisingly powerful. Walker can also enter a state called Overdrive, riffing off the Glory Kill loop introduced with DOOM by enhancing both damage and health-regen based on the amount of carnage you cause.

It’s the Overdrive factor that really sets Rage 2 apart from other open-world shooters that reward engaging enemies from range. We’re sure a sniper rifle will make an appearance in Rage 2, but the action we’ve seen showcased has been all about fast-flowing assault rifle and shotgun combat. Add to this Walker’s wing-stick boomerang and anti-gravity grenades, plus the Force-like super powers and you’ve got yourself an epic party.

The original Rage surfaced in the era of basically brown video games, and to be fair, it did brown and grey spectacularly well, befitting of its post-apocalyptic wasteland premise. In order to vary the experience, Rage 2 boasts many different biomes – varied location-types, in other words – introduced by terraforming Eco-Pods that fall from the sky to rejuvenate the planet. Initially we couldn’t figure out how a place like Texas would have bamboo forests, tropical jungles and British moors, but now we know! Apart from adding all kinds of wondrous color to the landscape, the new biomes help to mix-up the gameplay. Dry desert plains contrast starkly with the slalom-like twists and turns of misty woodland. It’ll mean switching up load-outs to find those most suitable for the situation, while being an opportunity for id Software and Avalanche Studios to have fun with the audio-visual cues. We dig it.

Color is definitely a theme for Rage 2, and we see it most prominently in the ‘Junker towns’ of the waste-landers, and high-tech greenlit control centers that summon the Eco-Pods. Color is also used to bring the enemy combatants to life, in ways that resemble ‘80s British punk.

The antagonists featured in the E3 2018 demo for Rage 2 look straight out of The Plasmatics or The Prodigy circa 1996. They’re a bunch of ridiculous punks with dayglo hair and outrageous fashion sense, almost begging Walker to kick their scrawny butts.

The hilarious thing about the animation in Rage 2 is how almost everything, even the mechs, seem to lurch around as though incredibly drunk. It’s a massive bar brawl on a brutal scale. When the mutant giant Ruckus the Crusher shows up, his appearance is perfect as a grand finale, shouting and spluttering from behind an oversize football helmet. The Goon Squad punks are predictable in their movements, while armless mutants leap into the fray packing shoulder-mounted rocket-launchers; the latter signaling the escalating problems to come.

Really, we have no idea what to expect from Walker’s enemies, which is part of the thrill.

Vehicular combat has never been done better than Mad Max from Avalanche. That same sense of weightiness and raw power is evident in Rage 2, meaning that armored cars, dune buggies, monster trucks and… that flying-laser-bike-thing should feel awesome to use in battle.

Giving Walker the rides he deserves really adds to his persona as a ranger (if not his name), rocking up to outposts with a routine pretty much already mapped out in his head. The moment where the action transitions from high-speed rocket-launching versus rival trucks to running and sliding with guns is the point at which we see the potential of Rage 2. We imagine this is going to feel a lot like giving chase the whole time, while simultaneously giving enemies the slip.

Whatever it takes to get the job done, we guess. This is the kind of frightening future that we can’t wait to launch ourselves into. Regrettably, we have until spring 2019 to discover if all our hopes are well founded.