Find the three hidden Elder Shard fragments to unlock all endings in Sundered. 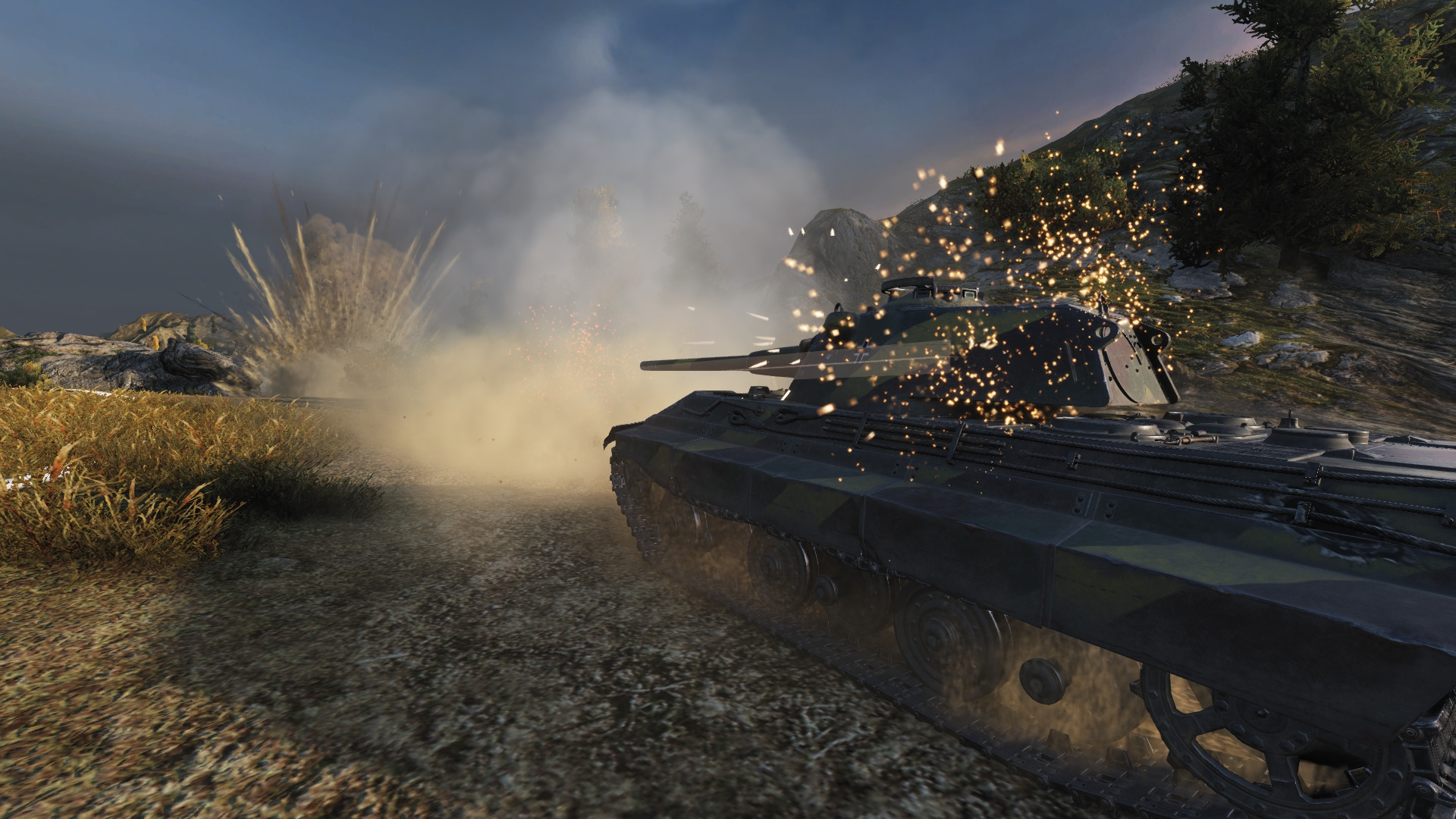 A quick rundown of the Harrier class in LawBreakers.

World of Tanks is home to many Battle Mechanics, affecting how the game works and how your tanks play. Most of them you’re almost definitely not familiar with, and many of those you don’t need to be familiar with, but there are some that provide knowledgeable players an advantage over those who haven’t done their homework.

In this article we’ll be looking at three of the latter, the Overmatch, Normalization, and Ricochet mechanics, which all go hand-in-hand and are used in every battle whether you realise it or not.

In World of Tanks we use the ‘normal’ or cosine angle as a starting reference when determining impact angle. In Layman’s terms, when the shell hits a flush, unangled surface absolutely perpendicular to it then the angle is 0 degrees. The impact angle is calculated based on the deviation from this normal, where 10 degrees is a very shallow angle, 65 degrees is a far greater angle, and 90 degrees would be parallel to the armor plate you’re firing at. An increased angle will mean greater effective armor or perhaps even automatic ricochet, thus if you’re trying to penetrate a target you want your shot to be as close to the normal as possible.

Normalization refers to the angle reduction applied based on the type of ammunition you fire - you can see the different types listed below. It’s also worth noting the angle at which each type of shell begins to ricochet for later reference.

What this translates to is differing Effective Armor (EA) values based on ammunition type. If an AP round is fired at a 100mm thick surface angled at 60 degrees, the effective angle would instead be 55 degrees as you subtract the base Normalization value of AP from the standard 60 degree angle, resulting in 174mm Effective Armor. Do the same with APCR and you’re facing 189mm EA. Again, for HE variants like HEAT, you receive no shell Normalization, resulting in the full 200mm EA.

Read: The Greatest Super Heavy Tanks in World of Tanks

This is very useful to keep in mind when deciding on which round to fire at the enemy, or when comparing tanks to their competitors. The 121 Tier 10 Chinese Medium Tank may seem like it has mediocre penetration at 258mm, but when you consider the EA reduction it receives against practically anything it fires at (considering it has AP standard rounds) compared to every other Tier 10 Medium Tank which each fire APCR, it has effectively the greatest penetration value of them all.

Alternatively, the Kanonenjagdpanzer Tier 8 German Premium Tank Destroyer has 238mm of AP penetration on its standard ammunition, but 250mm penetration HEAT rounds. Considering the Normalization of the AP rounds there’s almost never a situation in which you should ever fire the Premium HEAT, which is certainly an odd decision on Wargaming’s part considering the credit price of the Premium ammunition is over 11 times greater than its Standard counterpart.

Here’s where things can get complicated, hence the plethora of misconceptions surrounding this mechanic, but bear with me. Overmatch once again revolves around the concept of making tanks easier to punch holes in, but is based on shell calibre and only applies to Armor-Piercing shell variants like AP or APCR – HEAT, for example, cannot Overmatch because the calculation is based on Normalization values, and as previously established only AP variants have a Normalization value. Overmatch is split into two sections, Double and Triple Overmatch;

Double Overmatch occurs when your shell calibre is greater than (not simply equal to) the enemy’s nominal armor thickness, i.e. their plate thickness without taking into considering any angling, for example a 122mm AP shell hitting a 60mm plate. When this occurs the following calculation takes place:

To put this into a scenario we can understand, let’s theorize that there’s a Panther slightly angling his turret side away from your IS’s 122mm D-25T main armament at a 69 degree angle, or more accurately a 64 degree angle after your AP round’s 5 degrees of normalization is reduced.

The Panther’s effective armor value would only be 137mm anyway which wouldn’t be sufficient enough to stop your 175mm average shell penetration most of the time. However, accounting for the 25% shell penetration RNG that is present in this game, you could potentially minimum roll for 131mm of penetration instead, which would actually not penetrate the Panther’s soft armor. Because you Double Overmatched, however, the effective angle would be reduced further than a mere 5 degrees according to the formula above:

Rather than 5 degrees being taken off the original 69 degree angle, 17.08 degrees would be shaved off instead, resulting in a 51.92 degree effective angle and just over 97mm Effective Armor, completely removing the chance of ricocheting.

Admittedly, Double Overmatch isn’t too useful by itself considering high calibre guns capable of Double Overmatching usually have a high enough base penetration value to penetrate practically every time anyway, but it’s nice to eliminate the small amount of RNG present in specific cases nonetheless.

Triple Overmatch really doesn’t add too much more in the way of mechanics, but it enables all of Overmatch’s potential by introducing one minor factor – if the Shell Calibre is triple that of the Nominal Armor thickness, a ricochet is no longer possible (and the calculation for Double Overmatch is carried out).

In the aforementioned scenario, if the Panther aimed its turret face directly at the IS, then the IS would ricochet its angled turret side due to the angle exceeding 70 degrees (which, as previously mentioned, is the angle at which AP variants begin to ricochet). Were an FV215b (183) or FV 4005 to meet a Panther (perhaps the Tier 8 Premium variant the Panther mit 8.8cm L/71), however, they would not ricochet. Their 183mm AP rounds exceed triple the nominal armor thickness of the Panther’s turret sides, and considering the sheer penetration value of 310mm, they cannot roll low enough to not penetrate the effective armor value even at 89 degrees pre-calculation, making a non-penetration absolutely impossible.

It is important to recognise the difference between “non-penetration” and “ricochet”, however. While, indeed, a ricochet is impossible when a Triple Overmatch occurs, it’s entirely possible (while uncommon) to not be able to penetrate the effective armor thickness post-calculation if your penetration value is significantly low.

This is uncommon because, as previously mentioned, higher calibre guns at higher Tiers typically have a high penetration nature which far exceeds any sort of effective armor value a thin plate may have post-calculation. But, there are cases of low penetration Howitzers at lower tiers - capable of firing AP - simply not having sufficient penetration to penetrate the reduced Effective Armor value despite Triple Overmatching them, as shown in this Hetzer vs IS-4 and Object 140 gif below.

Due to the height of the IS-4 compared to the Hetzer, the roof angle reached around 87 degrees or above meaning, despite the Hetzer using 105mm AP rounds against the IS-4’s 30mm turret roof, the Effective Angle post-calculation was around 62.5 or higher, resulting in over 65mm Effective Armor (greater than the Hetzer’s 64mm average AP penetration).

As mentioned in the Normalization section, various ammunition types have differing degrees at which they ricochet. What strategic relevance does this have?

Well, for AP it’s obvious after you read the Overmatch section – 70 degrees can be very limiting when it comes to opening up weakspots on your enemies, hence Overmatch can be so very useful. For rounds that cannot Overmatch, however, having a higher ricochet angle can prove to be very useful, especially for HEAT rounds which typically have significantly higher penetration values than their AP and APCR counterparts.

What this translates to is you’re still able to take advantage of certain weak spots, such as turret roofs, through sheer penetration value and lack of care for ricochet angles up to 85 degrees (such as the IS-3, Obj 140, and IS-4’s roofs), while also being able to open up new weaknesses entirely unavailable to all AP variants due to the limitations of Overmatch.

As can be seen, the E 50 M’s turret sides are angled at just shy of 74 degrees with a nominal thickness of 80mm. Because there are no AP rounds above 183mm in calibre, let alone over the 240mm calibre necessary, it’s impossible to Triple Overmatch the E 50 M’s turret sides. At such an angle, however, they only have 300mm Effective armor thickness, making them penetrable by most Tier 9 and 10 HEAT rounds, such as those found on the T110E5 with 340mm of penetration. You can also take advantage of many side scraping tanks which cannot be overmatched, but are angled below 85 degrees (as is often the case) – just watch out for tracks and spaced armor.

So, go wreak havoc on those poor, unsuspecting Tiger 2’s in your IS-3 while being called a cheater for daring to read up on how the game works. Comment below on what you’d like to see for Battle Mechanic guides in the future.