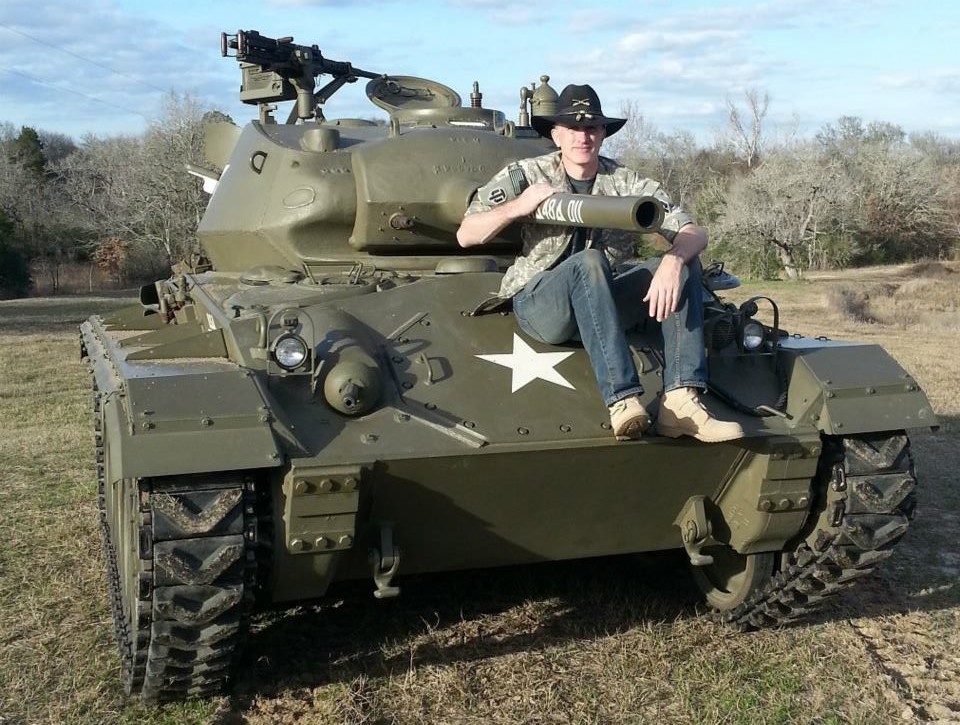 Over the course of last week, I've had the pleasure of speaking with Nicholas Moran, more commonly known in the community as The Chieftain, about his involvement with Wargaming and World of Tanks.

For those new to the World of Tanks scene, the Chieftain gives players an inside look at some of the most iconic tanks throughout history. You can find the Chieftain’s work over on his YouTube Channel as well as on the official World of Tanks North America YouTube channel.

A Chat with the Chieftain

Tank War Room: Hi Chieftain! Thank you for taking the time out of your busy day to have a chat with us here at Tank War Room. For the new players who might not be familiar with your work, would you like to introduce yourself?

Chieftain: I am Wargaming Americas’ tame tanker. An armor officer by training, I’ve been with Wargaming for somewhere near six years, now, providing a level of culture and civilisation a tanker can provde which might otherwise be lacking.

Publicly, I’m known for my various videos and written articles. Behind the scenes, I do work with musea, other parts of the organisation which need military-knowledge or contacts help, and whatever else I can put my mind towards.

TWR: How has your involvement with Wargaming and World of Tanks evolved over recent years?

Chieftain: When I got started, part of the problem was that nobody really knew what to do with me. Everyone else in the office came from good, pedigree gaming backgrounds, and a guy whose primary function was to know tanks was a little outside of their frame of reference. Near as I can tell, most gaming companies will contract out a military expert for the development of the game, and then release them once the contract is done. World of Tanks, though, (and the subsequent titles) are persistent, so there would be work for years to come!

I developed the “Chieftain” persona, encouraged EU to get their own equivalent (you’re welcome, Challenger!) and took off from there. I became initially the advocate for the ‘historian/military player’ in a world of folks who thought critical hits meant extra damage points caused, and who had no particular knowledge of military history or tanks (not to say there was no appreciation, just no knowledge).

Then I got into research for the vehicles for implementation in the game, as the person best able to access the US archives. From there, I used the archive materials I came across to write articles, and museum access to make videos, and so have morphed into my public role. I think, though, the fact that Challenger, Phalanx, and myself (as well as other, less public military/history types) have turned into rather different jobs for ourselves in our respective offices is an indicator of quite how unusual our positions are, as well as how the environments in our respective areas are different. The EU, for example, has a very robust museum network with high population densities compared to the Americas.

TWR: As you said, part of your work involves working with musea and collecting data on tanks, but the number of videos seems low compared to the quantity of tanks at these musea. How many musea have you visited and what sort of constraints inhibit more videos being released. Is it time-based, or something else entirely?

Chieftain: I have only gone to three musea specifically for the purposes of collecting data. However, if someplace for some other event, I may well happen to bring my tape measure and ultrasonic gauge along and use them in some downtime.

Fundamentally, though, the number of videos filmed depends on several factors, primary of which are ‘cost,’ ‘quality’, and ‘availability.’ Some musea have a lot of tanks, but oftentimes they are mere shells which are not worth filming inside.

We will generally film five tanks over a three-day period, and camera teams vary in size from two to four. You can imagine the costs which would result for a long stay on the road to do more than five or six tanks, plus, frankly, we have other obligations as well which means we can’t really spend weeks on the road at a time. My family, and the Army, would like to see me, after all. Plus there’s the internal-to-WG stuff I need to do.

TWR: That's a packed schedule. What else goes into the development of an episode of ‘Inside the Chieftain’s Hatch’?

Chieftain: First thing to do is find a tank, or better yet, group of tanks, to film. It would help if it can be somehow related to something going on in the game, such as with Sentinel and Scorpion. A group is obviously better, as we do try to be economical with the company’s money, and the airplane ticket costs the same for one tank or five.

The tanks have to be in reasonably good, filmable condition, unless there is no chance of getting anything better (e.g. Maus). They have to be affordable. Different musea charge different prices for access, and some are extreme, to the point that it’s cheaper to fly to Australia or Europe to access certain tanks than to rent from some US collections. Thus, some vehicles I have access to, but it doesn’t make sense to film right now.

Once the target vehicles have been located and booked, comes the research. On average researching and writing a script takes three to five days, once one has all the reference materials it is possible to get (Operator’s manual, Panzer Tracts books, whatever). Once filming is completed, it’s edited by the video team in Minsk. A rough draught is sent to me for edits, then transcribed, translated into Russian. Back to me for final edits. The Russian team does their dub, then it all gets uploaded. The fastest I’ve seen it happen is about a month after filming. Videos can be released up to six months or more after filming, depending on resource availability.

TWR: That’s quite a long process. Can you give us a hint about some of the tanks you have been sent out to see recently and what videos you have queued up?

Chieftain: There are a number of French, and one German tank in the can, awaiting editing. You will also be seeing videos about Dunkirk, Spitfires, HMCS Haida and US Naval Aviation which have been recorded and are in the chute.

TWR: We can’t wait to see them! How about that time you drove the S-Tank, just how much fun was that?

Chieftain: It’s always fun to drive a tank, but I think the grin on my face when I hear the turbine spooling up probably is all the answer you need. Definitely not a tank designed with tall vikings in mind, which is a bit disappointing, not something for me in the long term.

TWR: How does it feel to wake up every day knowing that you might actually drive some of the most awesome machines ever made?

Chieftain: Sadly, I don’t get to drive them all that often. Once in a while, though, it makes everything else worthwhile. As they say, if you enjoy what you do, you’ll never work.

TWR: What would be your number one tank to drive in real life?

Chieftain: All of them! Actually, I’m a little less interested in the driving than the turret positions. Pretty much any tank is easy enough to drive, once the various individual quirks are known. The purpose of a tank, though, is steel on target, and there is quite a variety of ways in which this is done.

Thus, I would give my left nut (metaphorically, I’m actually quite attached to the thing) to partake in a live fire maneuver exercise in Leopard 2, T-14, Merkava and Leclerc, for example, for comparison’s sake.

For the curious, the most fun military vehicle I’ve ever driven was a Stalwart 6x6 truck. For a video, I’d give much to be able to do a modified Table VI between a Sherman and a Panther. Even if it’s just by ‘laser tag.’ Doubt I’d ever get there, though.

TWR: We’re more than a bit jealous that you’ve gotten to drive and see so many tanks already. Can you tell us more about your involvement with the Nevada Army National Guard?

Chieftain: I transferred in after a couple of years in the Irish reserves and seven in the California Guard. Went to the resident Maneuver Captain’s Career Course in Fort Knox, Cavalry Leader’s Course, Fort Knox, and took command of a recon troop of Bradleys, part of 1/221 Cav Squadron.

Went to Afghanistan for a year, held on to command by the fingernails to get one more gunnery under my belt, and unfortunately got promoted out of the line and for the last five years I’ve been driving desks at State HQ and now am the Ops Officer for a signals (IT) schoolhouse.

I’ve been taking advantage of the downtime to knock out CGSC courses: Intermediate Level Education and Advanced Operations Course. We’ll see where I go next, I’ve got three years yet before I hit my 20 (For non-US-military types, this is the minimum necessary to make retirement). If I make Lt Colonel by then, I may hang out a bit longer.

TWR: We hear you are writing, and have written, a few books and pieces in your time. How did these come to be and where can we find them?

Chieftain: You will find that I’ve been popping up quietly here and there over the years. I have a chapter in “War Stories of American Tankers” and “M1 Abrams at War”, both by Michael Green, plus have written a few articles for the Irish Defence Forces magazine.

During my digging in the National Archives, I encountered quite a bit which, to my knowledge, had not yet been made public. Much was released as “Chieftain’s Hatch” online articles, but I realised that for whatever reason, there was enough relating specifically to tank destroyers which had not been released anywhere I was aware of, not least because the Archives are a bit of a mess and I’ll wager a lot of them simply hadn’t been found yet. Enough to make a book.

Thus began the long and slow odyssey of writing my first reference book. Part of the delay has simply been that this is a bit of a side-show, not related to my day-to-day WG work, and it competes with other demands on my personal time. (Particularly those CGSC courses which I’ve been taking the last three years). And part of it also related to waiting to see how the Hunnicutt book sold, to see if it would be easy enough to find a printer/distributor, and I think that was a success. The book is 95% written, it just needs some of the data pages, some tidying up on the formatting, and a review back to add in new information discovered since I started three years ago.

The interview continues on the next page as we discuss tank history.