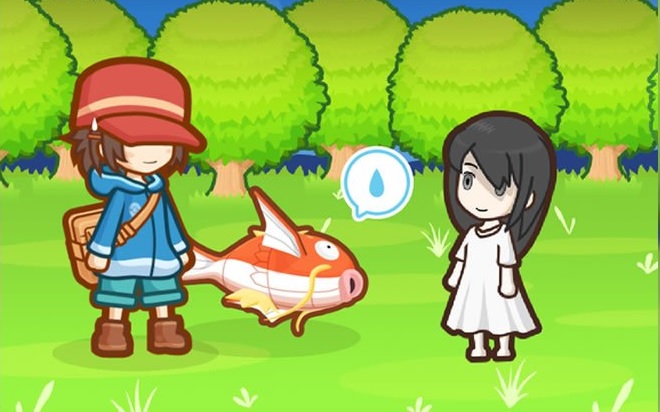 On the surface, Magikarp Jump is little more than a fun, addictive mobile game that gives purpose to an otherwise underrated Pokémon. If you play Magikarp Jump, you may already know how to get the best Magikarp for competitive League Play, or how to get more Diamonds to buy the best items.

However, Magikarp Jump has a few hidden secrets and Easter Eggs that even dedicated players might not be aware of.  Here are five hidden secrets and special encounters in Magikrap Jump that you should look out for next time you’re training your Pokémon at the pond.

In most Pokémon games, being able to evolve Magikarp into Gyarados is part of why players keep Magikarp around for as long as they do. The same evolution can occur in Magikarp Jump, but the result isn’t quite what the average Pokémon fan would expect.

Once your Magikarp evolves into Gyarados, your newly evolved Pokémon will automatically retire, meaning you basically lose your Magikarp and need to fish for a new competitor. On the bright side, evolving your Magikarp completes Event 36, titled “Adios, Gyarados!” and fulfills the Magikarp retirement achievement.

There are all sorts of different special events in Magikarp Jump, some of which include random encounters with visitors or other Pokémon. One random encounter is called “Be Gone!”, which features a ghost girl who appears after performing a specific task. Keep in mind that if you intend to summon the ghost girl, she will only appear once.

To summon the ghost girl in Magikarp Jump, you must tap on the TV sitting outside the home pond, and press Cancel when the prompt appears. Repeat these steps multiple times until the TV breaks and displays static on the screen. This usually takes about seven tries. Keep doing the tapping steps until the TV shuts off, then go into a training session with your Magikarp.

After your training session is complete, strange music will play and the ghost girl will appear, telling you to get out. Given her resemblance to Samara and the use of the static TV to summon her, the ghost girl seems to be a clear reference to “The Ring” movie. Choose to leave, and your Magikarp’s max level will increase by 1.

Fish for a Dratini

Magikarp aren’t the only aquatic Pokémon players can fish for in Magikarp Jump. It’s also possible to fish up a Dratini with the right amount of dedication. While some say catching a Dratini is purely random, other players swear by the recast fishing rod method. This trick is a bit expensive, so make sure you have a lot of extra Diamonds before trying to fish for a Dratini.

To fish for a Dratini in Magikarp Jump, you’ll need to recast your fishing rod five times, tossing back Magikarp you catch each time. The first fishing retry costs 10 Diamonds, while all retries after that will cost 50 Diamonds, meaning you need at least 210 Diamonds for this fishing trick. After the fifth recast, you should fish up a shiny new Dratini and complete the event titled, “You’re No Magikarp!”. Catching Dratini also earns you one Skill Restore item.

Pidgeotto Can Steal Your Magikarp

In Magikarp Jump, it’s a good idea not to get too attached to your Pokémon, as there are several ways to lose your Magikarp or have them taken from you. One way to lose your Magikarp is by having it captured by Pidgeotto, which is also part of the "Hop, Skip, & Whump!" event. To get Pidgeotto to appear, simply swim to the top of your pond and tap on Magikarp so that it repeatedly jumps out of the water.

The first time Pidgeotto appears, he will fly away. Continue jumping out of the pond, and Pidgeotto will return to swoop down and capture your Magikarp, carrying it away forever. Make sure to do this with a Magikarp you don’t like, as your Magikarp will be gone permanently.

Additionally, the "Is it Treasure?" event causes you to encounter a random Pokeball in the road. Ignoring it will grant you JP. If you choose to open it, you can either receive free Coins, or encounter a Voltorb, which explodes and causes you to lose your Magikarp. Choose wisely!

Typically, if you lose a league match in Magikarp Jump, you have to wait a certain period of time before you can compete in League Play again. Using an LP Restore item, as the name denotes, will restore your League Play during this wait time. Thanks to a special encounter event in Magikarp Jump, players can earn three free LP Restores just by losing several battles.

If you lose three League battles in a row, this triggers a random encounter called “You Can Do It!” After losing the third battle, a Man of Mystery will approach your trainer, granting you three free LP Restores. This is an easy way to earn free LP Restore items for players who are patient enough to wait out the timer and not level up their Magikarp after each consecutive loss.