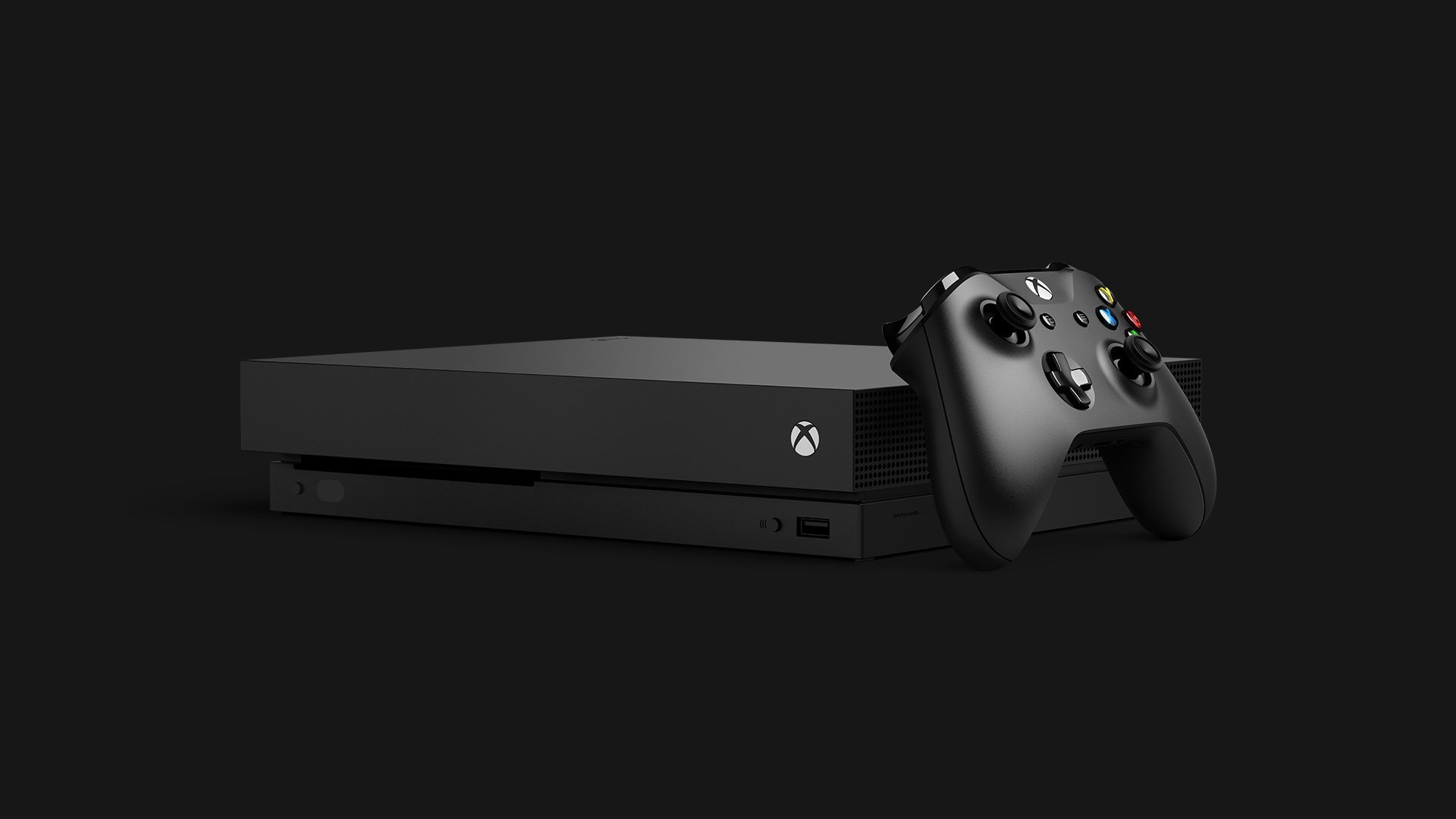 Xbox One X could help Microsoft retake the lead

Your humble correspondent has been playing games for 30 years and writing about them for 20, and in that time we can recall two absolute watershed moments in the advance of graphics as we saw them. The first came when we slotted a 3dfx Voodoo II graphics accelerator into our late-90s PC. The jump in resolution and the night-and-day difference in lighting and visual effects had us installing old games we barely cared about just to see the improvements. We felt the same way again with the dawn of the HD era, as console games suddenly leapt off the screen in crisp 720p after decades of fuzziness.

Microsoft was one of the principal advocates of the "HD era" - in fact that was Xbox executive J Allard's patented term for it - and believed that by embracing this higher standard of graphical output in its Xbox 360 console, it would get the jump on a slow and complacent Sony PlayStation. Microsoft was right. Xbox 360 was a huge driver among gamers for the shift away from analogue CRT TVs towards flat-panel HD displays. It's strange to think that we ever needed convincing. Now Microsoft hopes it's picked the right moment again to push us all towards 4K and HDR with Xbox One X, which it calls - with some justification - the world's most powerful games console. So what's it like? And are we ready?

Xbox One X itself is an awesome engineering accomplishment - a console pretty much the same size as last year's already modest Xbox One S, but boasting insane levels of comparative power. Plug it in and set yourself up and it feels like a regular Xbox One experience, but once you start throwing a few games up on the screen, the difference is obvious. While not every game supports 4K, HDR and 60fps gameplay, there are a bunch that do, and it's fun to go through your games collection checking out the updates.

Forza Motorsport 7 is the posterchild for Xbox One X, and while not everyone will care about the seventh installment in a racing game series that also boasts a spinoff Forza Horizon series three games deep, there's no question that Turn 10's racing opus lives up to the technical hype. Jumping into an early Audi showcase race at Brands Hatch, the first thing that strikes you is the sharpness of the track beneath your wheels. Playing from the bumper cam view, your face is pressed right up against the black asphalt, and even walking right up to the 65" display it's almost impossible to pick out the pixels. As we start clawing our way past the other cars, the frame-rate never falters. And the cars! It will be tempting to just leave the camera idling through your garage when you have friends over, such is the detail.

Assassin's Creed Origins is another game that has really leant in on the technology, which enhances Ubisoft's Q4 tentpole blockbuster with 4K visuals right out of the gate. This is a seriously good looking game at 1080p, and it's worth revisiting the starter area of Siwa just to climb to the synchronization viewpoint overlooking the area. Even climbing up there, as the camera pulls back to reveal the sumptuous mountainside you're scrambling over, is quite astonishing, but the view from the top, miles above Bayek's lush oasis village home and the surrounding desert, reveals unbelievable detail even at vast distance, and on such a huge TV the sense of having to look around to take in the whole scene is enhanced further.

Looking back while looking forward

These feel like next generation moments, even in a mid-generation hardware refresh, and there are more fantastic enhancements to check out across other supportive titles. As we discussed in our roundup of great 4K games to play on Xbox One X earlier this week, titles like Call of Duty: World War II and FIFA 18, not to mention earlier games like Rise of the Tomb Raider, Gears of War 4 and Halo 5: Guardians, really embrace the extra resolution, lighting options and frame-rate. We're still playing the COD WW2 campaign, and revisiting the Operation Cobra advance on Marigny for a few minutes, watching the sun creep through dense foliage as tanks rumble through country lanes past barbecued Nazi armor, makes us wonder if we should just start over again. Every WW2 game seems to go for that Saving Private Ryan D-Day moment, but with 4K, COD WW2 might just recapture it.

Funnily enough, it's by going back a generation that we see some of the hidden promise of this new technology. Microsoft is losing this console generation - this is hardly up for debate - and when Microsoft is losing, it tends to become ridiculously generous and occasionally inventive in its attempts to win back the hearts and minds of gamers. The decision to spend valuable resources adding 4K modes to games like Halo 3 feels like a great example of that. Running through the familiar jungle of Sierra 117 as Master Chief begins his defence of Earth is like playing a whole new game, but of course we're not - we've literally put the Xbox 360 disc in the drive and downloaded a patch. Anyone who put off buying The Master Chief Collection because of the bugs and has their old Halo discs handy will be richly rewarded for their caution, and in an age of expensive HD remakes, seeing how good Halo 3 now looks - a 360 game you can buy for a couple of bucks second hand - is faintly ludicrous.

Xbox One X is delivering that thing we talked about at the outset, then: we're digging out old games out of pure curiosity to see what kinds of enhancements have been made. We spent a good minute or two just walking up to trees and plants in the first level of Halo 3, reaching out our rifle like a prosthetic arm to try to caress the pin-sharp textures of this ten-year-old video game. This is what a new generation of consoles should be like.

Xbox One X feels like one of those moments, then. It isn't quite the night-and-day transition, but at the very least we're definitely going from twilight to dusk. This isn't just a slight upgrade. This is some of the most cutting-edge games running at crazy resolution, with vastly improved lighting, often at a higher frame-rate, and all of this is unfolding on a TV the size of a football pitch, where there's nowhere for jagged edges to hide.

Xbox One X doesn't solve all Microsoft's problems. If you weren't sold on Xbox One before because of its relatively weak catalogue of exclusives, then Xbox One X isn't going to change that. But if developers continue to embrace this platform the way Assassin's Creed Origins and Call of Duty: World War II have done, then this is going to become the go-to console for third-party games. That slight edge it has over PS4 Pro in terms of specs isn't that important now, but it feels like it might well by this time next year when 4K TVs are in a great many more homes than they are today. Why would you play on a lesser format? This was always why Xbox 360 and then PS4 won out in third-party game-buying decisions, and how they ultimately took over your friends lists. Could Xbox One X start the next reversal?

Of course, 4K isn't ubiquitous yet, just as HD TVs weren't when Xbox 360 hit the market. They still feel like an extravagance. But with Black Friday fast approaching, we're going to start seeing some seriously competitive pricing on vast, fantastically specced 4K TVs, and now that both PlayStation and Xbox platforms support the format for games, giving developers no reason to equivocate about whether to do so, it feels like we're going to see an acceleration in uptake. When the clocks change late next year, we expect every major title to launch with native 4K HDR support, hopefully at 60fps.

And if you've made the jump to 4K by then, it's going to be hard not to argue that Xbox One X is the best console to own to play those third-party triple-A blockbusters.