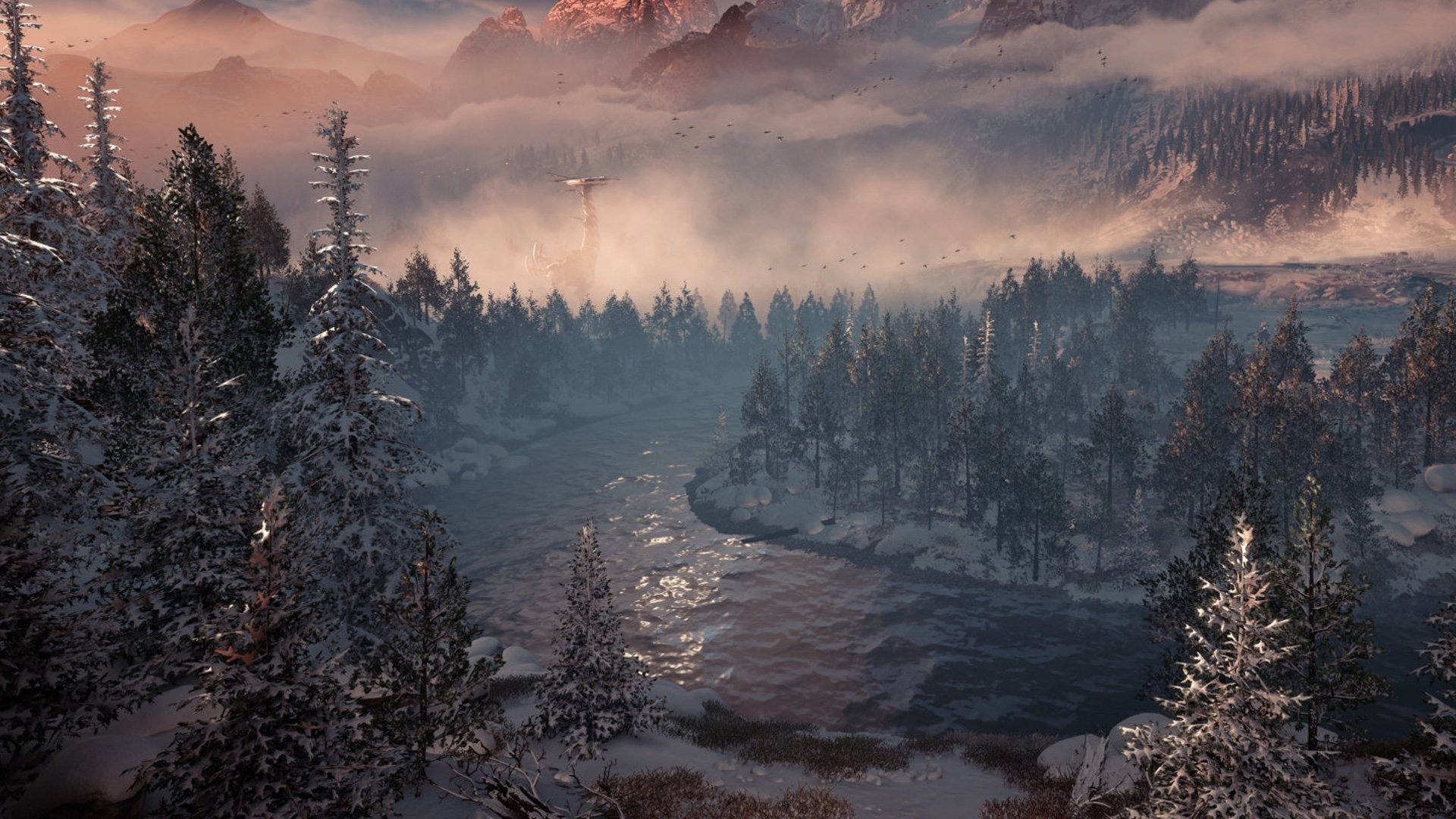 If Horizon Zero Dawn was already a gluttonous feast of action-adventure goodness, then The Frozen Wilds is the triple-decker, gut-busting dessert with sparklers. Do you need it? Of course not, but somehow you’ll find a second stomach for all of its riches, wade in and enjoy it immensely anyway.

Few games enjoyed as much critical acclaim as Guerrilla Games’ open-world monster-slaying romp did when it emerged last February—and rightly so. On the face of it, this Assassin’s Creed-meets-Monster Hunter mashup wasn’t terrifically original, but the execution was damned near perfect in every regard (even if Breath Of The Wild stole its thunder just a few weeks later).

The combat was flexible, creative and brutal; the narrative was understated yet rich with intrigue; and the puzzling provided the ebb to the flow. These elements together made for a compelling combination that made the game world worthy of exploration. As with all these kinds of open-world games, it took ages to get through, but by the end of it, you don’t really want it to end.

So that’s where The Frozen Wilds comes in: a perfect excuse to dive back in and slay some more giant robotic death machines in acrobatic fashion.

More of the excellent same

Being mere DLC, you can probably already guess that it’s more of the same, but when it’s this good, that’s absolutely fine. So, you can expect more errands, more side quests, and more puzzly bits twisting dials. It’s also got a lot more dialogue with a cast of hirsute ‘Banuk’ tribal oddballs looking for lost items/friends/redemption, satisfying exploration, a clutch of new wildlife to hunt and big monsters to fight/tame and rare trinkets to claim. You will certainly not be short of stuff to do.

Just as before, it looks absolutely first class. Despite the recent arrival of Xbox One X, Frozen Wilds serves as a timely reminder of the stunning majesty the PS4 Pro can muster in the visual stakes when put to work (and also what a good exclusive game should look like). In 4K HDR, it is comfortably the best demonstration yet of what modern TV display technology brings to the party. Its use of lighting and weather effects are far beyond anything out there at the moment, and its environments are routinely breathtaking.

Being set up in the icy mountains, Guerrilla Games has evidently worked hard to make the icy wastes present in “The Cut” area chill your bones with a suite of subtle new weathe effects that amp up the atmosphere. Seriously, don your thermals. These sub-zero locales are enough to make Aloy’s lips blue as she braves the wind-whipped snowstorms on the way up the jagged, unforgiving terrain.

Along the way, the aforementioned badass red-headed female protagonist will be forced to fight a bunch of new high-level enemies (usually level 35 and above, be warned)—such as the Scorcher—who are noticeably faster and even more aggressive than most of what you’ll have experienced during the main game. But, hey, by this point, Aloy should also have been sufficiently upgraded to be able to turn these surly aggressors into a pile of bolts easily enough.

If you never finished Horizon: Zero Dawn, don’t stress too much. The game suggests you hit level 30 before heading into The Frozen Wilds but it’s definitely not mandatory. In fact, the requirement for playing it is to have merely finished the early mission A Seeker At The Gates. It will, of course, be easier the higher the character level is, but even a character in the low 20s will be able to deal with enemies no problem—it just takes a bit longer to wear foes down.

One of the first new additions you come across are the Control Towers, which are horrible columns of hatred that essentially buff all the enemies in the area by repairing them. You can either creep up and override them, or take them down from afar—but at the high risk of attracting enemies to your position in the process. As ever, combat is flexible and strategic, and there are always many different ways to go about things. Every enemy is a puzzle to unpick, so take your time.

Frequently, though, it starts off as a hellish game of trial and error as you suss out the best strategies, roll around endlessly, sneak in a few shots, and slowly become aware of the weak points to target, and the safest vantage points. But even when you foul up (which you will), generous checkpointing generally gets you back into the action quickly enough.

Once you’re on a roll, even the most fearsome looking goliaths tend to be manageable once you’ve taken the time to get the measure of them. Dyed-in-the-wool Dark Souls and Monster Hunter veterans, however, might find it all a little bit too forgiving and casual for their tastes, but for mere mortals, it pitches the challenge well hits a satisfying sweet spot that is rarely overly punishing.

With its relatively deep Diablo-esque approach to gear and upgrades, you can spend a lot of time in The Frozen Wilds obsessing over the fun new weapons, mods and abilities to your already expanded set. You get cool new upgrades for your spear, a new weapon that can shoot electricity, and some useful new additions to the overall move set that can also be used in the base game—presuming you want to go back and finish anything off later (or, for newcomers, give yourself a better chance of evening the odds).

But delving back into Horizon—as fun as it absolutely is—is also a reminder of what it does not do on a gameplay level. For anyone who has spent dozens of hours playing The Legend of Zelda: Breath of the Wild, they might feel that things have already moved on in the open-world action-adventure space. Link’s latest was a genre-defining masterpiece in so many ways, while this is merely excellent. Solid, but not revolutionary, you might say. However, Horizon still beats most games hands down in the visual stakes, so those seeking sumptuous visual delights will be supremely well served.

For the money ($19.99 at launch), no one should complain: it’s 10-15 hours of high-quality new content for one of the most highly regarded games of 2017. Sure, it’s short on real surprises, but The Frozen Wilds is a timely reminder that single-player gaming is not dead, and serves as an excellent excuse to revisit one of the best single player action-adventures on the PS4.