The Surge - How to Beat The Black Cerberus, Boss 4

The Black Cerberus boss guide for The Surge. 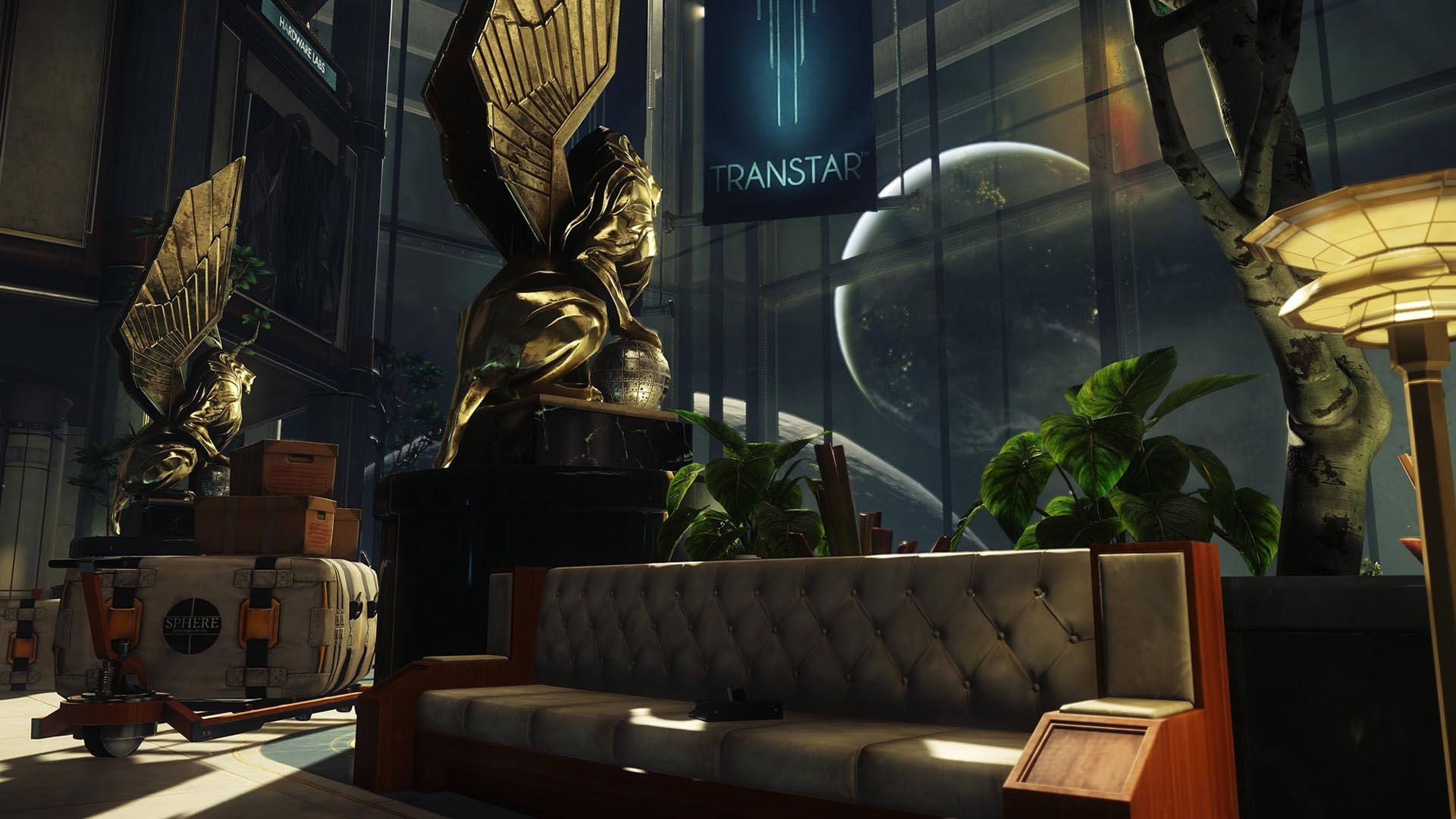 In Prey, Fabrication Plans are a type of blueprint that allow players to craft various items including Neuromods, weapons, and medkits. Several of the Fabrication Plans can be found in multiple areas, so if you miss one, browse through our guide to see if you can find the same plan elsewhere. This guide will help players track down every Fabrication Plan in each major location of Talos I in Prey.

Shortly after leaving your apartment, head to the Simulation Debriefing room. There's a safe in the corner that can be opened using the code 5150. Inside, you'll find a Psi Hypo Fabrication Plan along with some other useful items.

This Fabrication Plan is found on Caleb Hawethorne's computer inside the Research & Design office in the Neuromod Division. You’ll need to unlock Hacking 1 first in order to access the computer terminal. Once you hack into the system, go to Files and press Transfer Files to download the Huntress Boltcaster Fabrication Plan.

Go through the Level 2 door to the Volunteer Quarters. To open the door, use the code 8545 or 9758. Inside the office to the left is the Disruptor Stun Gun Fabrication Plan, just beside the bottles of bourbon.

Head to the Neuromod Installation and Extraction area in Volunteer Testing. An Anti-Rad Pharma Fabrication Plan should be on top a crash cart.

While you’re snagging the previous plan in Morgan Yu’s office, make sure to look on the desk beside the Fabricator machine to obtain the Wrench Fabrication Plan as well.

The Fabrication Plan for crafting 9mm bullets is found on a corpse in the Teleconferencing Center in the Talos I Lobby. This corpse also carried the Silenced Pistol.

To find the first Medkit Fabrication Plan, head to the Trauma Center on the second floor of the Talos I Lobby, just across from the Staff Lounge. Look for this plan on top the desk in the middle of the room.

Enter the Security Room inside the Hardware Labs. Pass under the debris to enter the office. Beside the Security Station terminal, you'll find the Silenced Pistol Ammo Fabrication Plan on the desk.

This plan is located in Machine Shop 2F. Head to the far right corner and look for this plan on top the desk across from the Recycler.

Head to the Machine Shop in Prey’s Hardware Labs. Access Mary Malinaro's computer across from Franklin Goode's computer where you found the Artax Propulsion System Plan. Go to Files and download the Boltcaster Ammunition Fabrication Plans from Mary's workstation.

Another Medkit Fabrication Plan can be found in the second floor atrium in the Hardware Labs area. The plan is on top the gurney in the medbay.

This plan is in the machine Shop in the back-right corner within the caged area. You must unlock the Leverage 3 ability in order to lift the blockade over the door. The Weapon Kit Fabrication Plan lets players craft weapon upgrade kits.

To get the Q-Beam Cell Fabrication Plan, you must use Mimic to get through the ajar maintenance hatch leading to the Blackbox Lab. The plan is found on the Phantom that’s locked inside. Alternatively, you can download this plan from the workstation terminal in the Blackbox Lab instead.

Go down to the nuclear waste disposal area past the Machine Shop in the Hardware Labs. The Wrench Fabrication Plan is on the floor in front of the red tool cabinet. The containers of toxic waste nearby can give you radiation poisoning, so grab the plans quickly and get out of there.

The Silenced Pistol Fabrication Plan is located inside the Armory. The Armory requires a keycode from the prisoner inside the Materials Extraction Lab. Free the prisoner to get the code to the Armory, or use Mimic to get inside. The plan is found on a nearby shelf.

Look for the corpse of dead scientist Ruby Stone outside the Live Exam Room in Psychotronics. On the body you can collect the Psi Hypo Fabrication Plan as well as some other items.

A second Anti-Rad Pharma Fabrication Plan in Prey can be obtained in the Morgue. Look for a broken turret beside the desk in the back-left corner. The plan is on top the desk.

Make your way to the Fuel Storage Room in the G.U.T.S. area and search the floor around the decommissioned Fabricator in the bottom area to find the GLOO Cannon Fabrication Plan.

The EMP Charge Fabrication Plan is found in Engineering Level A on the body of the late Eric Berger, located near Psychotronics.

Look for the body of Jenny King outside the hallway to the Talos I bulkhead, just before the stairs. Loot Jenny’s body to obtain the Disruptor Battery Fabrication Plan.

Another Neuromod Fabrication Plan can be found on Alex’s computer. Access the computer and download the file to obtain this plan.

Head to the Crew Quarters passage. Search the lockers until you find the plan for the Psi Hypo Fabrication Kit.

Another Shotgun Shells Fabrication Plan can be found on the corpse of Lizzy Colton, near the door to Crew Quarters.

The Shotgun Fabrication Kit is found in the sealed, caged section on Level 2 of the Arboretum. You’ll need Leverage 2 to move the heavy object out of the way after breaking the glass. Once you enter the caged area, search beside Carin Buckley’s body for the schematics.

There are two Anti-Rad Pharma Fabrication Plans found in the Crew Quarters. One plan is located in DeVries’ cabin on top the bed. The other can be found within the medbay, but you’ll need Leverage 2 to move the heavy containers first.

Locate Dr. Thorstein’s Quarters and take down the Phantom. Search the body for the cabin key, and use it to access his room. The Recycler Charge Fabrication Plan is inside.

Go to the Crew Quarters Mail Room that contains Lia Macy’s corpse. Search behind the Concierge desk to find another Medkit Fabrication Plan.

Locate Abigail Foy’s workstation terminal in the Crew Quarters. Access her computer to download the Boltcaster Ammunition Fabrication Plan from her terminal.

The Weapon Kit Fabrication Plan can be downloaded from Sarah Elazar’s terminal in the Crew Quarters. However, you’ll need the Hack 2 ability to access her computer.

Locate Hans Kelstrup’s cabin in the Crew Quarters. Here, you can find another Psi Hypo Fabrication Plan atop the desk.

Head over to the Executive Suites and enter Morgan Yu’s cabin. There’s a Neuromod Fabrication Plan on the desk beside the chipset.

Enter Danielle Sho’s office in the Data Vaults and look for a yellow note stuck on the back of her workstation monitor. The Q-Beam Cells Fabrication Plan is inside a safe in the corner on the opposite side of the room. Use the code 6918 from the note to open the safe and obtain the plans.

If we discover any more Fabrication Plans during our time in Prey, we will update this guide accordingly.