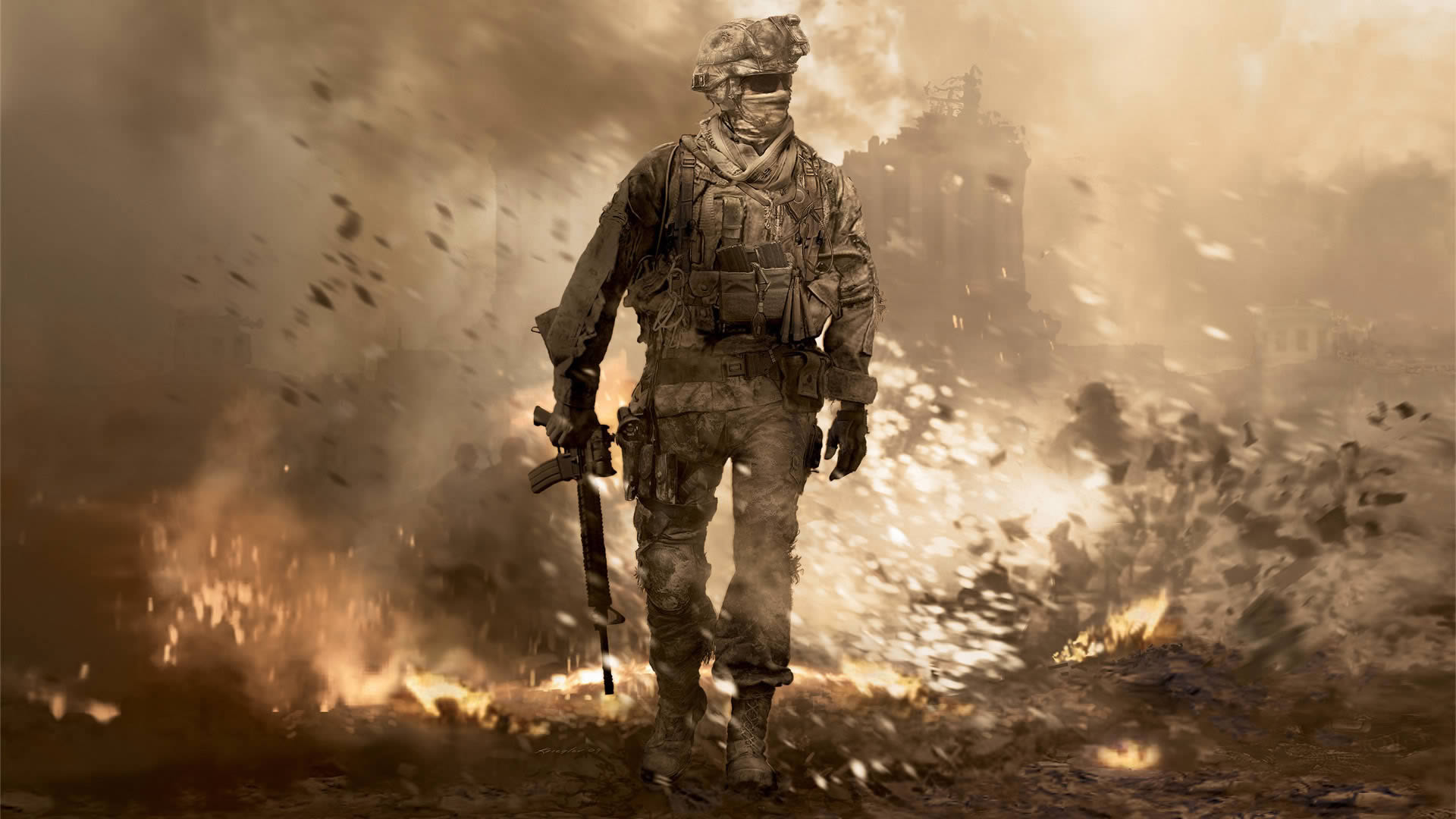 A Veteran's Viewpoint: Call of Duty

As Military Appreciation Month rolls on, we here at Tank War Room have been looking at the various ways in which we can do our part to help honor the brave men and women who serve our country. Especially considering how our website is primarily dedicated to one of the most iconic military games on the market, World of Tanks.

Fortunately, I found myself in a unique position where I could explore the connections between military-themed video games and the actual military more in depth, as I just so happen to have a brother who served in the United States Marines for two separate deployments, and who also happens to be a bit of a gamer as well.

My brother, Alexander James Hohl, was a Corporal (E-4) in the U.S. Marines and served for two separate tours to Helmand Province, Afghanistan in support of Operation Enduring Freedom (OEF).

During his first tour, he was a heavy machine gun operator. For his second, he served as a squad leader, watching over a group of fellow Marines that ranged in number from 9-16 men at any given time, and leading them on patrols “beyond the wire” (into enemy territory).

Now that he’s finished his military service, Alex likes to unwind by occasionally playing first-person shooter games like Call of Duty and Halo, as well as less violent games like the Madden NFL series and Mario Kart (put a Red Shell in his hands and he will gladly ruin your chances of taking first place).

When Activision and Sledgehammer Games recently unveiled Call of Duty: WWII, I found it interesting that they were putting such a heavy emphasis on the high level of authenticity they were trying to maintain while developing the game.I figured there were probably some World War II Veterans out there who didn’t appreciate seeing experiences that they’d lived and suffered through turned into Hollywood-esque entertainment. I also wondered how my brother would feel if a Call of Duty game with a similar emphasis on authenticity was made for the Iraq-Afghanistan war (as I’m sure will happen at some point in the future).

So, I decided to ask him. The following is a transcript of questions I asked my brother Alex as well as the answers he supplied. To help frame his answers, I also asked him to watch the Call of Duty: WWII reveal trailer before he wrote anything down. I’ve also lightly edited the questions and answers for clarity. Both Alex and my sister Samantha currently work for a Veteran’s care foundation called Home Base, which you can read more about in my recent feature that covers various military-centric charity organizations, some of which have ties to gaming.

Nate: This may be a bit of a tough first question, but how do you feel about the idea of Call of Duty putting a greater emphasis on authenticity? Is it a method of "honoring the troops" that you agree with? Would you find it offensive if a similar sort of approach (combining authenticity with Hollywood-esque set pieces) was applied to a game set in the Iraq-Afghanistan war?

Alex: Certain aspects of realism in military video games are important. These aspects include authenticity of the mission taking place (like the D-Day invasion of Normandy for example), details of the weapons and battlefield, and how the gamer encapsulates the entire game experience.

For example, when I play a World War II video game, I like playing missions that actually took place (i.e. D-Day invasion, Battle of the Bulge, push into Germany), but where it’s individualized to the player and I can choose my own way to get the mission accomplished (usually charging in with a machine-gun, guns blazing, as you know).

Making a game “authentic” to the actual experience is honoring in itself, but not the best way. I completely understand that these games are not designed to be exactly like the “real thing,” and making it into an experience that is 90 percent fictional can be insulting to the brave men and women who fought on these battlefields.

However, if the gaming community really wants to “honor” Veterans like they say, they can donate to any of the multitude of VSOs (Veteran Service Organizations) or volunteer their time. On my first deployment, we spearheaded Operation Moshtarak, the battle for Marjah (supposedly the last Taliban stronghold in southern Afghanistan). If they wanted to make a video game about that, I would want the objectives to be similar (like our actual objectives of clearing sectors of the city or reaching certain phase lines).

Although, I would not expect it to be exactly like when I was there on patrol. However, there were key battles within that larger conflict that a Call of Duty developer could certainly incorporate into the experience.

Nate: You don't have to go into super deep detail, but why do you enjoy playing shooter games like Halo and Call of Duty? Is it fun seeing more fantastical representations (sci-fi, jet-packs, wall-running, etc.) of warfare?

Alex: I enjoy shooter video games because I find the strategy, tactics, and implementation of maneuvers challenging and fun at the same time. It’s mostly a personal preference thing. In real life I like shooting guns, in the military I liked doing combat drills and maneuvering on an objective as a team, and I obviously love the game of football. That’s why I enjoy playing games like Call of Duty, Halo, and Madden.

Nate: Do you think a lot of Veterans enjoy playing shooter games? And if so, why?

Alex: This question is a double-edged sword. On one side, I feel Veterans find shooter video games more appealing because it’s something they can relate to personally and professionally. They join the military, get all this training, wear the uniform, go to war, come home, and they find a sense of familiarity they’ve lost since separating from the military.

One of the things I miss the most about the military and being on deployment is wearing the uniform every day, the rush of being on patrol, implementing the tactics and training I was taught, and being with the Marines I served with as one unit. This sense of familiarity and relatability is something many Veterans search for upon separating from the military, and video games can facilitate that feeling.

On the other side, FPS video games, especially more realistic ones, can be psychologically triggering to Veterans. As you’re well aware of, one in three service members return home from deployment with some kind of invisible wound of war, whether it’s PTSD (Post-Traumatic Stress Disorder), a TBI (Traumatic Brain Injury), moral injury, or any number of the symptoms concurrent with those diagnosis.

With these games becoming more “real,” Veterans might find themselves avoiding (avoidance being one of the biggest characteristics of psychological trauma) these kinds of games for psychological reasons.

Nate: Do you think it's possible that games like Call of Duty could serve as a form of therapy? For instance, allowing Veterans to explore war-torn environments in a safe space that wasn't meant to be super serious or realistic?

Alex: This is an interesting question. I don’t believe that video games alone can serve as an effective treatment for the invisible wounds of war, but they can serve as a beneficial and contributing factor along with proper mental health treatment.

Here at Home Base, one of the methods we use in Prolonged Exposure Therapy (PE) is called “in vivo.” “In vivo” means “in the moment” in Latin. Utilizing this “in vivo” training, we put Veterans in situations they are normally uncomfortable with, like being in large crowds, sitting with their back to people or to an entrance or doorway, walking up to buildings or structures that remind them of buildings they saw in Iraq or Afghanistan, etc.

We start small, obviously, and work our way up with different severities of exposures, but these FPS video games can serve as a level of this “in vivo” exposure (more at the extreme end after the patient has already done some “in vivo” work).

When I first read through Alex’s answers, I found them to be pretty in line with who he is as a person. Namely, someone who isn’t afraid to express his opinions or get rowdy when he’s having a good time, but someone who also takes his experience serving in the Marines very seriously and who genuinely wants to help his fellow former Marines receive the care they deserve.

His comments on taking realism too far with an over-emphasis on violence were something that resonated with me as well, mainly because it was honestly not something I had really thought about whenever I played games like Call of Duty or Halo. Obviously I don’t like it when any game focuses too much on graphic violence, but I’d never considered that the level of violence which is present could mean the difference between a Veteran enjoying a military-themed game, and them not enjoying it.

Those comments in particular once again led me to ponder this idea of authenticity in military video games, and whether there’s such a thing as too much authenticity (I’m inclined to think there is, but I also know I am but one gamer with one opinion out of many).

I want to thank Alex for taking the time to answer my questions and Tank War Room for letting me publish this piece that’s as personal in nature for me as it is professional. I’m not sure what the military/FPS gaming genre will look like in the years to come, but I think if this interview proved anything, it’s that how such games affect real-life military service members is an issue that should be constantly revisited, especially if this emphasis on authenticity continues to grow.