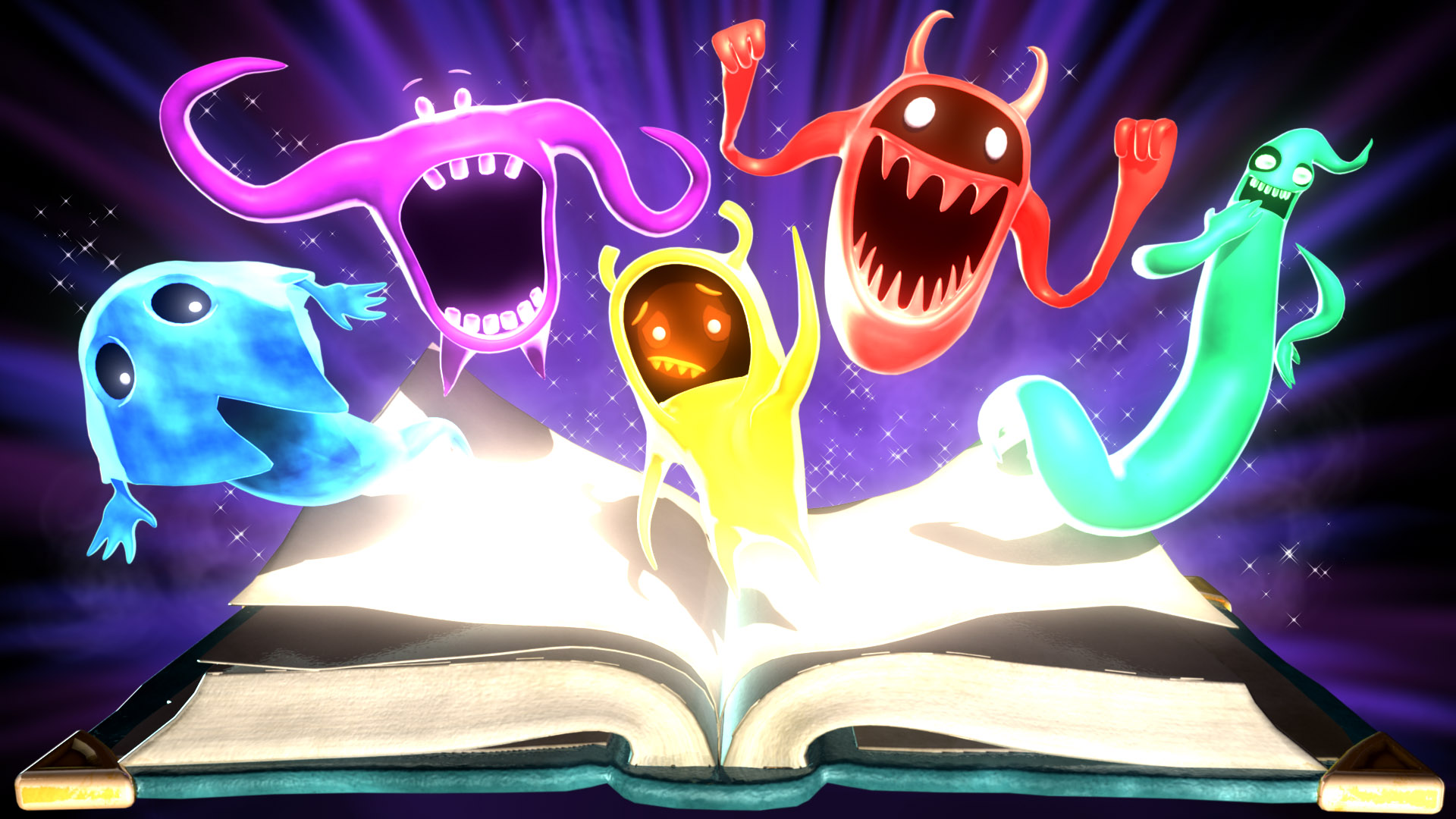 The yellow Ghost Writer is behind you as you enter Tribalstack Tropics. Drop down or use the ramp to the right to find him holed up.

The green Ghost Writer is across the first bridge and to the right in an open sandy oasis area.

The blue Ghost Writer is long the path from the pig in the jungle, right near the floating platforms.

The pink Ghost Writer is found relatively close to the start of the level. Look for a collection of platforms leading to a small piece of land.

The red Ghost Writer can be found once you expand the Grand Tome. To find the red Ghost Writer head to the back-left area of the map and climb the Monument almost to the top. Take the path that leads away from the main mountain, you will come across jumping eyes that attach to objects. Continue along the path until you spot the red Ghost Writer. Remember to dodge its attacks at hit it when it turns yellow.

The yellow Ghost Writer is behind a cage at the start of the level, to the left after the small water section. To reach him you need to have the Slurp State skill and use it on the fire brazier nearby. Once hot, you can walk through the fire to reach the Ghost Writer.

The pink Ghost Writer is in a block of ice above Dr Puzz in the left arm of the tower. To collect it you need to have the Sonic ‘Splosion skill, which is purchased from Trowzers in Moodymaze Marsh. Use Sonic ‘Splosion on the block of ice, and once free, you need to use Slurp Shot to collect a grenade from the far platform and then race back using the roll. Fire a bunch of grenades into the Ghost Writer’s mouth and he’ll turn green and be ready for you to collect.

The green Ghost Writer is in a small cave that can be reached by going underwater near the Bone Explorer. To collect the Ghost Writers you need to chase him around and touch him. It’s difficult because of the icy floor – use jump and attack abilities to move through the air quickly.

The red Ghost Writer is in the extremely cold area near where you enter the world. You will need to light the braziers up by using the Slurp State skill to swallow a coal and lighting up each of the braziers.

The blue Ghost Writer is near the ruins beneath the water. You will need to use Bubble Walk and Sonar Shot to see him.

The first Ghost Writer you can collect is the red one just near Trowzers. You will need the Lizard Lash skill to grab onto the tether atop a tree.

The pink Ghost Writer is in the new expanded area on top of a shack with a Mr Blowy. You will need to use Slurp Shot to eat the icy seeds and then climb up using the holes. At the top, use the Lizard Leap to reach the Ghost Writer between gusts of wind and shoot the icy seeds into its mouth.

The yellow Ghost Writer is located near Trowzers, but to reach him you will need to find the broken slot machine nearby. From there, look for the diamonds you can shoot with Sonar Shot, follow the route through the area until you come out above the level. Look down to the left and you’ll see the Ghost Writer on a balcony.

The green Ghost Writer is above one of the sets of roulette machines near the golf course and the ball and vent game.

The red Ghost Writer can be collected after expanding the Grand Tome. Head right around the outside of the level, passing the ball drop game with the picture of Capital B and look for the ramp that leads to glass. Progress through the rooms to find the Ghost Writer on the third dance floor. You will need to dodge and then attack him when he turns yellow to collect him.

The pink Ghost Writer is found in the expanded version of Capital Cashino. Head left from the starting area and enter the new Memory Game room. The Ghost Writer is in the fourth room with the raised pillars. You will have to feed him with the ice seeds to collect him.

The blue Ghost Writer is on top of the golden block near the golf course. The block is surrounded by card critters and robot sentries – so be careful!

The yellow Ghost Writer can be found as soon as you enter Galleon Galaxy. Turn around and walk to the boardwalk, look right and see a collection of asteroids, use the Lizard Lash skill to pull yourself higher until you reach the moon. Go inside the moon to find the yellow Ghost Writer.

The pink Ghost Writer is behind the bar in Lunar Lockup, the first building you come across after traversing the gap. You will need to feed him the grenade seeds to collect him.

The blue Ghost Writer can be found on top of the second building with the red girders. You will need to use Sonar Shot to make him visible.

The green Ghost Writer can be found in the expanded version of Galleon Galaxy. You will need to find the Mollycool and then use the Dr Puzz transformation. Sail toward the giant pink moon and destroy the group of asteroids to uncover the Ghost Writer.

Collecting all the Ghost Writers unlocks and Achievement in Yooka-Laylee, as well as a Tonic from Vendi. They can be a bit challenging to reach and collect, so make sure you have the necessary skills from Trowzers before taking on this challenge! If you followed this guide, you should now know the location of all Ghost Writers in Yooka-Laylee.