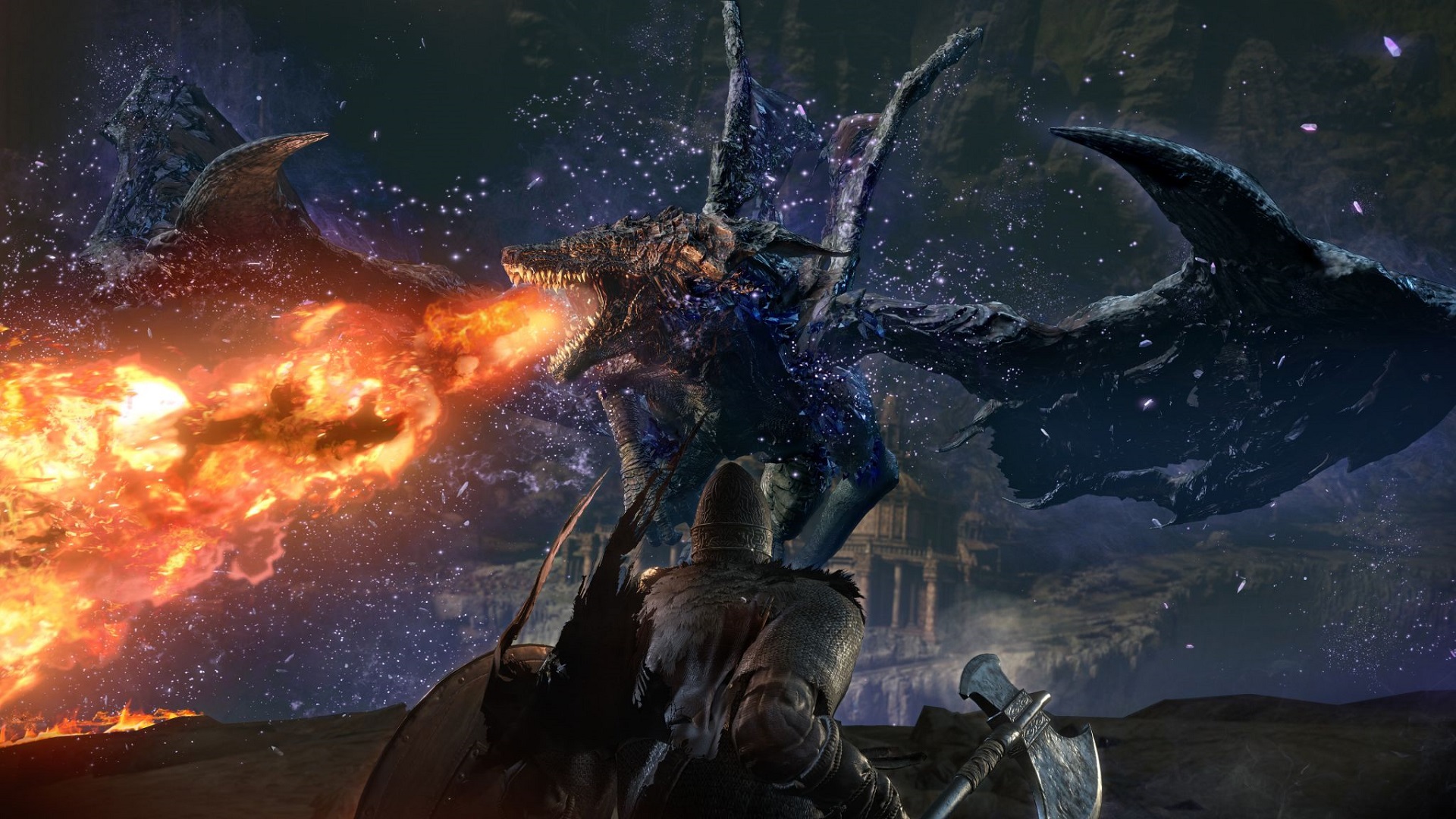 So, you’ve worked your way through Dark Souls 3’s harrowing Ringed City DLC and managed to triumph over the DLC’s three new main bosses. Congratulations are certainly in order, but your trials are not yet finished my dear Ashen One. As you might have already expected, The Ringed City contains a fourth boss hidden away in an optional arena, and trust me when I say he isn’t easy to defeat.

In this guide, we’ll show you how to reach the optional Darkeater Midir fight, offer some tips on how to bring the great dragon down, and show you the rewards you get for finally besting him.

How To Reach Darkeater Midir

In order to reach Darkeater Midir, you first have to complete a series of tasks. First, activate the Ringed Inner Wall bonfire and open up the elevator shortcut that connects the bonfire to the area outside the church which contains the Halflight, Spear of the Church boss fight.

Next, you’ll need to knock Darkeater Midir off his perch on the bridge just past the crumbling tower bonfire (you’ll notice he doesn’t die outright once you drain his health, he simply falls into the chasm below).

After the above conditions are met, ride the shortcut elevator and look for a side passage that opens up about halfway along. Quickly roll into the side passage and head down into a room of knight statues.

Striking one of the statues on the right will disperse an illusory wall and reveal another passage that leads to a ladder. After climbing down the ladder, you’ll enter another room with a large hole in the floor at the back. Falling through this hole will drop you into the Darkeater Midir fight.

The first time you fall through the hole, you’ll see Darkeater Midir lying down near the back of the large arena, recovering from the tumble he took earlier. He won’t get up and attack until you approach, so take this time to cast buffing spells, use consumable items, etc. If you die during your first attempt, Midir will immediately move in and attack during subsequent attempts, so you only get to do this once.

Like most Dark Souls 3 bosses, Midir has a large repertoire of attacks, all of which hit like a truck and can make your first few attempts fighting him feel overwhelming and hopeless. Furthermore, the fact that he’s highly resistant to almost every form of damage doesn’t help. Midir is somewhat vulnerable to lightning, however, so plan accordingly if you’re a magic user and/or like using elemental damage on your weapons.

A good strategy for damaging Midir with a melee character (which is what I used) is to move in close. If you get too far away, he’ll employ some powerful lunge attacks that are very hard to dodge. Once you’re close enough, try to stay parallel with his neck. At this range, he’ll usually go for claw swipes and bites that can be easily dodged once you know his tells.

After each attack, Midir will lower his head, allowing you to move in and score a few hits (you do more damage hitting his head and neck than you do the rest of his body). Don’t get too greedy with your hits, though, as Midir will often transition into his area-of-effect flames attack.

This can be avoided by running away shortly before it starts (Midir will get up on his hind legs whenever he plans to unleash the AoE). If you manage to avoid the flames, you can quickly move in and get another hit or two in. If he leaps into the air for an aerial-based flame attack, simply run to the left of wherever you were when he started the attack and you should remain unscathed.

The only other thing you need to watch out for is that, once he gets low on health, Midir will start using two new attacks to try and throw off your rhythm. These attacks include a dark magic AoE blast (he’ll gather dark energy for a few seconds before hand, telegraphing the move), and a mass of red affinity homing projectiles which can be avoided by quickly rolling multiple times.

I managed to beat Midir using a +10 Refined Dark Sword held in a two-handed grip. This gave me decent damage output when hitting his head and allowed me to consistently land 2-3 hits each time without consuming too much stamina. I’ve read that dodging under him and attacking his tail is also a viable strategy. However, I personally think this method leaves you too exposed to his tail-whip counter attack, and makes it harder for you to outrun his AoE flames.

If you prefer visual aids, you can watch the fight unfold in video below, courtesy of YouTuber Fextralife.

Beating Darkeater Midir may certainly seem like a Herculean task, but doing so is well worth it as you get both his soul (which allows you to craft either the Frayed Blade or Old Moonlight weapon), and the Spears of the Church covenant badge.

Equipping the badge makes you part of the Spears of the Church covenant, allowing you to be summoned as a PvP invader when other players are fighting Halflight (yes, much like the Looking Glass Knight boss fight from Dark Souls 2). You can use a unique Ritual Spear Fragment power while summoned in this manner and defeating other players as a Halflight summon awards a new kind of item called Filianore’s Spear Ornaments which can be redeemed at the altar right outside the church.

Redeeming ten Ornaments at the altar awards a Young Grass Dew item that permanently ups your absorption and stamina regen as long as you have it in your inventory. Additionally, redeeming 30 Ornaments grants a Divine Spear Fragment that basically functions as a more powerful version of the Ritual Spear Fragment power.

For more Dark Souls 3 guide content, be sure to read our guide on how to triumph over The Ringed City’s final boss, Slave Knight Gael.