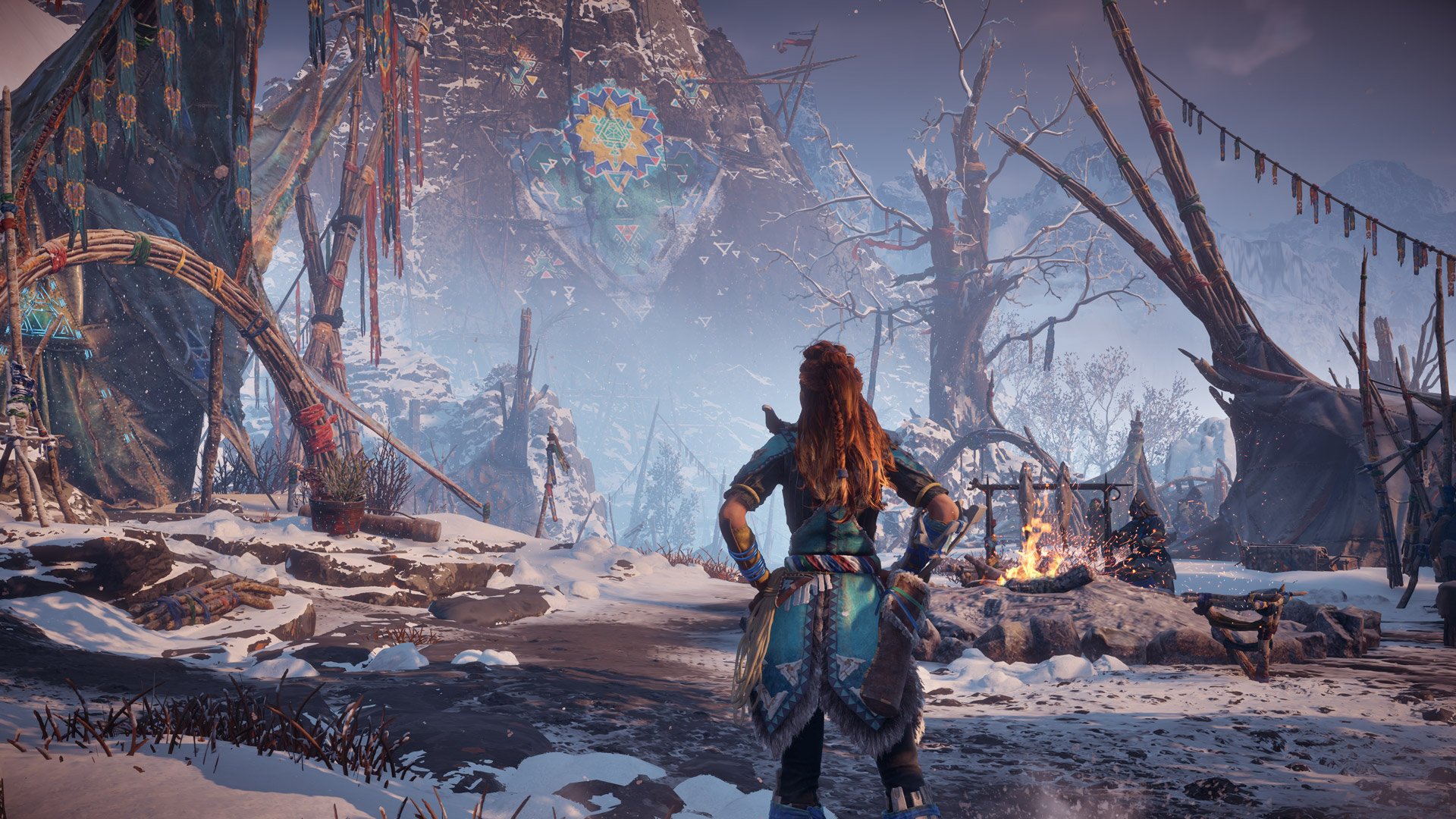 Spooky rocket launchers let friends send you on a journey.

The hottest DLC of the year has now arrived as Horizon Zero Dawn takes us to The Frozen Wilds in search of more robo dinosaurs to hunt. But there is also another batch of collectibles to find hidden throughout Aloy's world.

To help you not get lost in the wild new areas of the game, we've gone and found where all the Animal Figurines and Pigments are hidden. But first up, you've gotta find the Frozen Wilds.

How to access the Horizon Zero Dawn Frozen Wilds DLC

First up, buy, download and install the DLC. You'd be amazed how much easier it is after you do that. The Frozen Wilds DLC gets added onto your existing save and opens a new main quest line for you to find. To begin the "Into the Frozen Wilds" quest, there are three NPCs around the base game's map. Talk to any one of them to begin the quest, and after that you can explore the Frozen Wilds at your leisure.

The three NPCs you need to talk to and begin the DLC quest are:

Rhavid, a Carja Noble who will brief you on the Banuk borderlands, located just outside Meridian's main gate.

Ohtur, who will give you directions to The Cut, located inside the Daytower fort.

Yariki, a Banuk woman escaping The Cut who can be found just north of The Grave Hoard. You're basically already there if you find her, though, so just keep going.

Once you've found The Cut, there are another six Animal Figurines hidden out there in the Frozen Wilds. Here we'll give you a visual guide of where to look for each of the figurines to complete the set.

In the middle of the new area, there's a control tower and some beasties to dispatch. Once you have, check underneath the fireplace in the remains of an old building in the area, for your first figurine.

For the second animal figure, head to the dam in the region, in the West of the expansion map. Facing the dam, look to the right and head through some building ruins leading away from the dam until you find the animal figurine on a window ledge.

The third animal figurine is hidden just to the north of Song's Edge, a settlement in the West of the map and one of the earliest towns you visit during the main quest. There is a small building surrounded by red grass, and the figurine is inside on a window ledge.

This figurine is found during the Shaman's Path quest, as part of the main quest line. You'll be given the quest when you arrive in Song's Edge, and the figurine can be found at the end of the mission when meeting Ourea.

The fifth figurine is right up at the northernmost point of the DLC area, in the Drone Hangar. Once in the hangar, climb up and across the wall to a terminal that lets you move the drone. Then climb onto the drone itself and leap off the rear left wing, and Animal Figurine 5 is on the catwalk there.

The final animal figurine can be found at the edge of a Control Tower zone to the North East of Song's Edge. Head to the area marked on this map and you'll find it at the base of a ruined tower.

At some point in your time in the Frozen Wilds, you'll encounter pigments scattered throughout the new Horizon Zero Dawn DLC. There are nine pigments, and they're needed to progress in a quest to gain favor with the Banuk tribe in Song's Edge. You'll need to find all nine and turn them in to Sekuli, the painter found halfway up the mountain with Banuk designs on its cliff face, just outside Song's Edge.

The Light Salt Pigment is just to the North of Song's Edge, in a large mound on the edge of a clearing.

The Dark Oxide pigment isn't too far away, find a brownish mound in the side of a cliff just to the West of the road here.

The Medium Oxide pigment is just to the South West of Longnotch, follow the northernmost river valley until you see a rock on the North bank that has some light brown coloration on it.

The Dark Salt pigment is right in the middle of the new map, just south of that big three-way intersection. There's a little group of dead trees and a tall pillar of slightly darker looking stone than that light salt column you plundered earlier.

For the light crystal pigment, hit up the south face of that big mountain in the middle of the map. Next to a large tree trunk on top of some flat rocks at this marker, you'll find a cluster of crystals on the ground. Snatch them up.

For the medium crystal pigment, head to the north east of the map where there's a bandit camp. Go straight north of there and at the edge of a cliff there is some orangey crystals inside a rock guarded by some pretty big daemons. So watch out while you scoop this up.

Right, for the medium salt pigment, remember that bandit camp in the north-east you just avoided to get the medium crystal? You're going to need to go in there and basically clear it all out. Head to where the bandit leader is at the top of the camp and then drop down and interact with a discolored mound on the frozen pond below.

Here's your final pigment, and it's probably the most difficult to get, fittingly. The Dark Crystal (not the Jim Henson movie) is right at the summit of that big mountain in the middle of the map. The south face is practically vertical, so try coming around from the north and look out for climbing sections. Good luck!