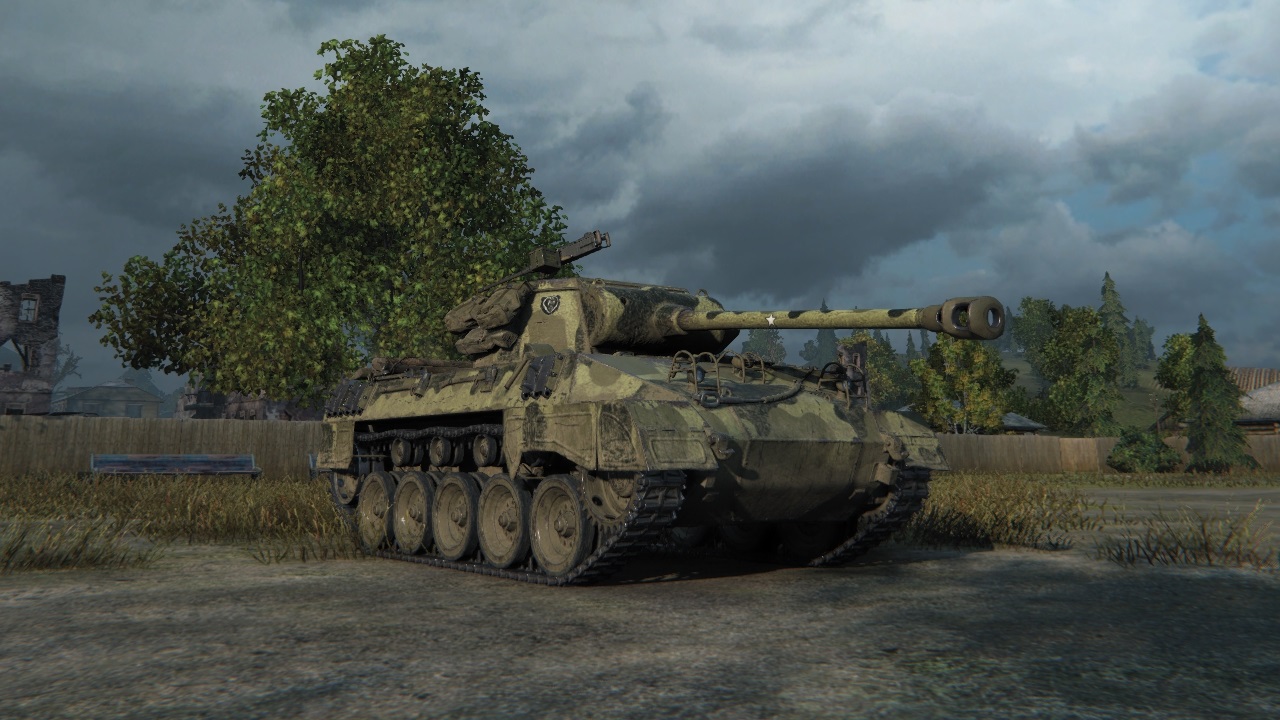 In 1941, Lieutenant Colonel Andrew Davis Bruce requested a specific type of tank from the United States Ordnance Corps. He essentially wanted a fast tank with a big gun. It didn’t matter if the tank had minimal armor, what he envisioned was a platoon of extremely mobile, hard-hitting tanks capable of taking out what the Germans were putting onto the battlefield.

It wasn’t until July of 1943 that Lieutenant Colonel Andrew Davis Bruce’s tank was put into production. Though the plans were to originally use a Christie suspension, a Wright-Continental radial engine, and a 37 mm gun, the final design utilized a torsion bar suspension, a 9-cylinder, 450-horsepower radial-type aircraft engine, and a 76 mm gun M1. The gun was the same one used during the development of the M4 Sherman.

In World of Tanks, the Hellcat has the option to upgrade to the 76 mm Gun M1A1, with its ultimate upgrade being a 90 mm Gun M3, the same originally proposed by the US Ordnance Corp. Both versions of the tank (real and in-game), are roofless tanks, meaning they're extremely susceptible to HE or HEAT shells from SPGs.

This lack of defense can sometimes be avoided if the pilot has a keen eye—look out for missed SPG shots and then immediately relocate! Use the Hellcat’s high mobility to your advantage when flanking or maneuvering between ideal positions. The Hellcat was long considered to be the United States’ fastest armored vehicle, being able to achieve a top speed of 50 mph on-road, and 18 mph off-road.

This speed was reached by keeping the armor to a maximum thickness of one inch, and by utilizing a roofless design. Thanks to this, the Hellcat was able to cement itself as one of the United States primary anti-tank units.

During combat, commanders of Hellcats utilized specific tactics in order to ensure their vehicle could damage the German's armored tanks which consisted of Panzer IVs and Panthers. The main problem the Hellcats faced was the armor of the Panther's incredibly thick frontal armor. By flanking, or reaching an ambush position, the Hellcat was able to target the weaker points of the Panther, such as its sides and rear.

Over the course of its life, the Hellcat saw action in the Italian, European, and Pacific theaters, as well as use during the Korean War. On the other side of the world, the Korean War ended up being a deciding factor for the Japanese to remilitarize, a decision which inspired them to create the Type 61 MBT.

As far as popularity goes, the Hellcat remains a fan-favorite for players in World of Tanks. This is mainly attributed to its damage, accuracy, and speed—as well as its unique, fully traversable turret. Whether it’s claiming astounding kill-to-loss ratios in World War II or on the battlefield in World of Tanks, the M18 Hellcat is one of the most noteworthy tanks ever produced by the United States.