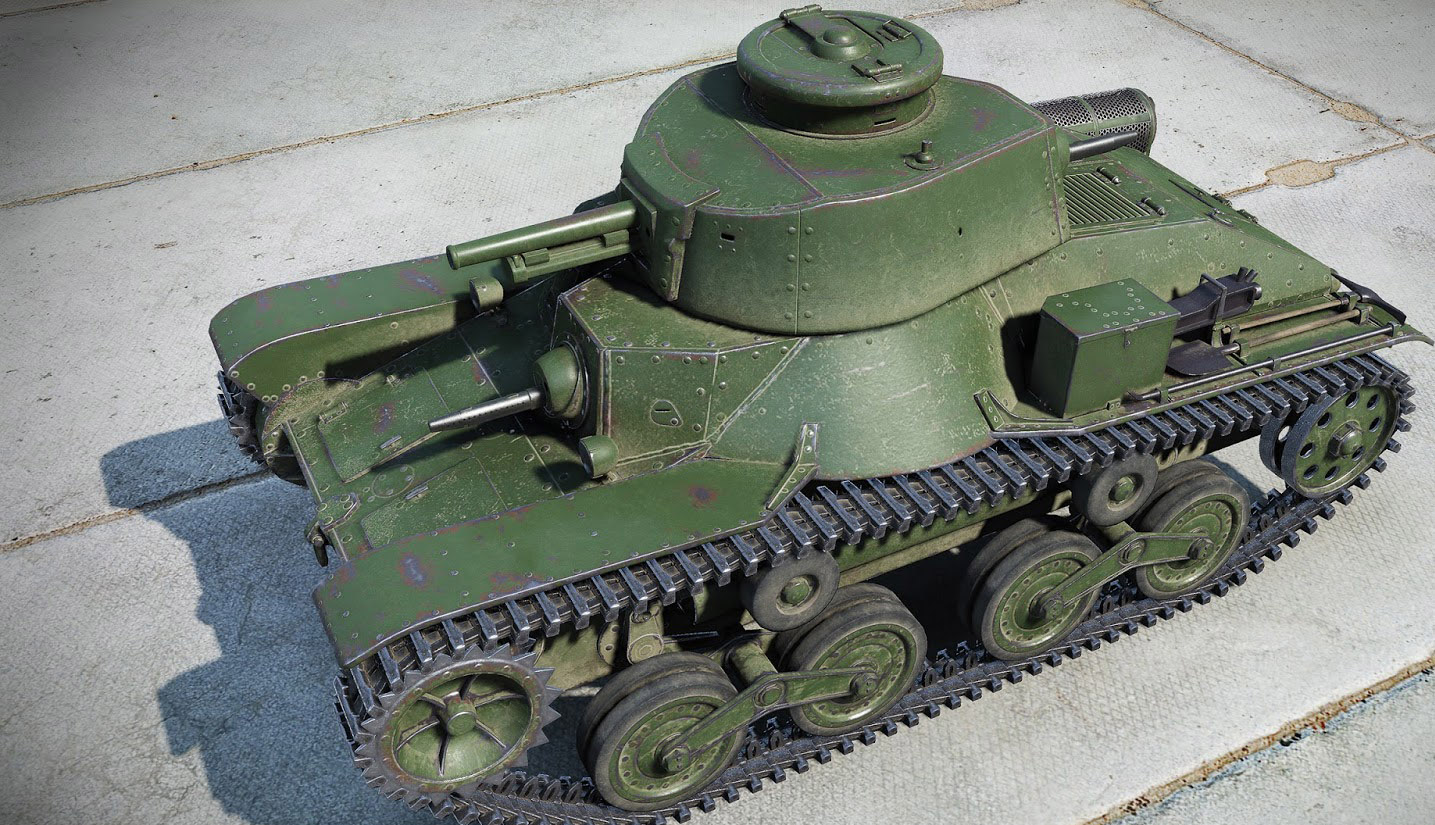 Originally produced in 1936, the Japanese Type 95 Ha-Go was designed as an infantry support tank, and much like the American M3 Stuart, its purpose was never to fight other armored vehicles. Despite being developed almost a decade before World War II, the Type 95 Ha-Go still saw use during the Second World War.

The Japanese army had started toying with the idea of a mechanized military as early as the 1930s in an effort to increase the land speed of their infantry units. At the time, a motorized infantry unit could only achieve 40 km per day, thus the goal was to create a light armored vehicle (sub-7 ton) that could achieve a top speed of 40 km/h.

Unfortunately, the Type 95 Ha-Go did not reach the ideal weight of sub-7 ton but was still able to reach and exceed the expected speed, clocking in at 45 km/h. This speed was generated by a 120 hp Mitsubishi A6120VDe air-cooled 6-cylinder diesel engine that was located in the rear of the tank on the right-hand side. The in-game version, however, is only able to reach 40 km/h despite having the aforementioned engine.

By the time World War II was in full swing, it was obvious that the Type 95 Ha-Go was becoming—if not already—obsolete compared to the opposing side’s tanks (such as the fabled M4 Sherman). The Type 95 Ha-Go was still capable of coping with older tanks, such as the M3 Stuart, but it had trouble penetrating the newer armored vehicles.

These penetration issues are also evident in World of Tanks as the Type 95 Ha-Go offers only decent penetration for its tier level. Thankfully, the amount of heavily armored vehicles at Tier 2 is limited, meaning no matter the armament one chooses, all should deal sufficient damage. When looking for the greatest amount of penetration, the 37 mm Gun Type 98 should be researched and purchased as soon as possible to help penetrate any heavily armored opponents.

Much like in World of Tanks, the real world version of the Type 95 Ha-Go came with a Type 94 37 mm Tank Gun that could elevate between -15 and +20 degrees—a gun depression matched in-game which remains an extremely important factor in 95 Ha-Go’s survival. This excellent gun depression should be taken advantage of in an attempt to avoid as much damage to the hull as possible.

Both versions of the Type 95 Ha-Go suffer from thin armor, with the real-world version having the Commander housed in the turret who would be responsible for not only commanding but observing, loading, aiming, and firing the gun. In-game, the Commander performs the duties of the Gunner and Loader, so avoiding an unconscious Commander is extremely important. Consider purchasing rations and First Aid Kits to quickly bring a Commander back online.

While there are no longer any surviving relics of the Type 95 Ha-Go in Japan, this tank, that lasted over a decade and fought in numerous major wars, can still be found in museums around the world. With 2,300 units produced, the Type 95 Ha-Go was considered one of the best light tanks of the 1930s and remains an enjoyable and rewarding tank to use in World of Tanks.