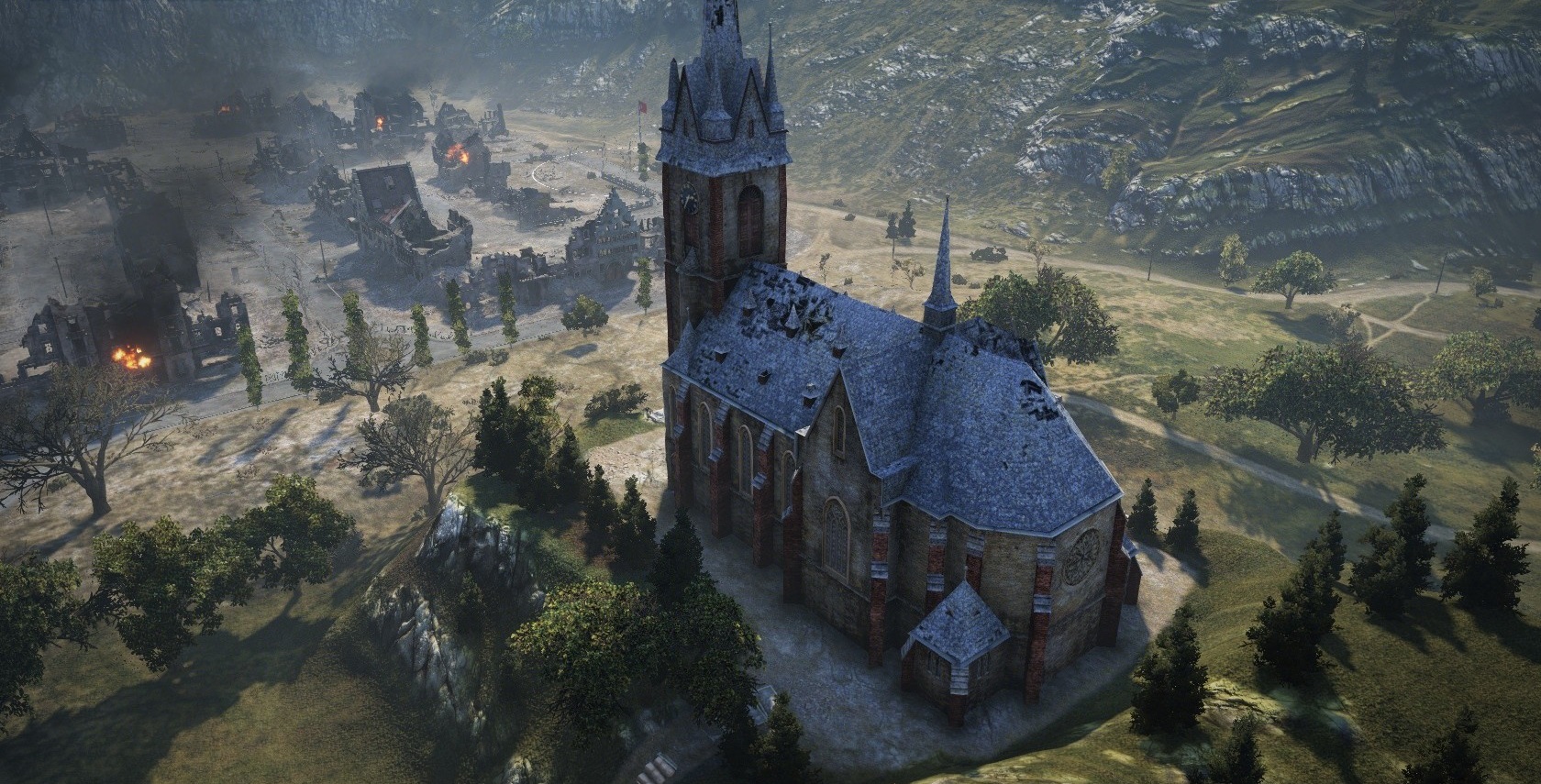 Tank Battlegrounds is a series that discusses tips and strategies for playing on a specific map in World of Tanks. This Tank Battlegrounds guide will prepare you for the tight corners and close-quarters encounters in the ruins of Mittengard.

Mittengard is one of the smallest maps in World of Tanks, and is only available to tankers in Tiers 1-3. This map is easily recognized for its steep hills on opposite sides that overlook a ruined city in the valley below. Both teams spawn along each hillside, looking across from one another at the beginning of the match. The team flags are at the base of each hill, in the D4 and G4 sectors.

Matches on Mittengard can be somewhat hectic and tend to go by rather quickly. The compact design of Mittengard causes both teams to confront each other almost immediately, at least for those who drive straight into the ruins. Scouts can easily spot the opposite team without having to move far. On the hillside spawn, you’re essentially a sitting duck, so it’s important to plan ahead and quickly move into position at the start of battle.

Mittengard breaks down into four main regions: the city ruins, the area around the church, and the two patches of land at the northeast and southeast corners of the map. Your positioning and plan of attack will depend on the type of tank you’re using. Let’s review these key locations so that you know exactly where to go at the start of the match.

The city ruins consist of tight corners and narrow corridors, with plenty of walls to use as cover. Medium Tanks are best suited for combat within the ruins, as these tanks can brawl at close-quarters while still having enough maneuverability to quickly slip behind walls for cover when necessary.

While the center of the ruins can get quite chaotic, most of the action in this area occurs at the outer corners of the city, along the 1 and 6 lines on the minimap. Medium Tanks should lead the advance around the corners, and Light Tanks should follow closely behind, spotting as much as possible. Carefully peek around corners and through openings to pick off health from enemy tanks that may come around the bend. Stay close to teammates and watch your flanks, as enemy tanks can easily cut through the center of the city and surprise you from the side.

Tank Destroyers should hang back near their team’s flag capture point, aiming down the straight paths along the 3 and 6 lines. There should ideally be at least one TD defending each of these lines to protect the sides of the flag.

The open area surrounding the church along the 7 line can be very dangerous. At least one Light Tank should plan to head toward the church at the start of the match, in an effort to spot incoming tanks at the corners of the ruins as well as any enemy SPGs that may pass by. Tank Destroyers should also post up near the sides of the church and watch for opportunities to snipe enemies. There are limited bushes and trees to use for cover, so stay close to the sides of the church to avoid being seen.

Mittengard features two open patches of land in the northeast and southeast corners of the map. These sections were practically made for SPG (Artillery) Tanks to post up and provide support for their allies. SPGs should avoid being near the ruins and should position themselves in these corner sectors as quickly as possible. The Light Tanks near the church can provide spotting assistance for their allied SPGs, while Medium Tanks and TD’s can finish off any remaining stragglers.

Mittengard may not have the finesse of other maps, but it can still be quite fun to play. Its compact size allows players to quickly delve into the action while also making tank roles somewhat easier to understand. Now that you have an idea of how to play on Mittengard, you may be tempted to play low-tiered tanks more often!

For more map strategies, head over to our Tank Battlegrounds Himmelsdorf guide to learn how to conquer the hill and dominate the train tracks!