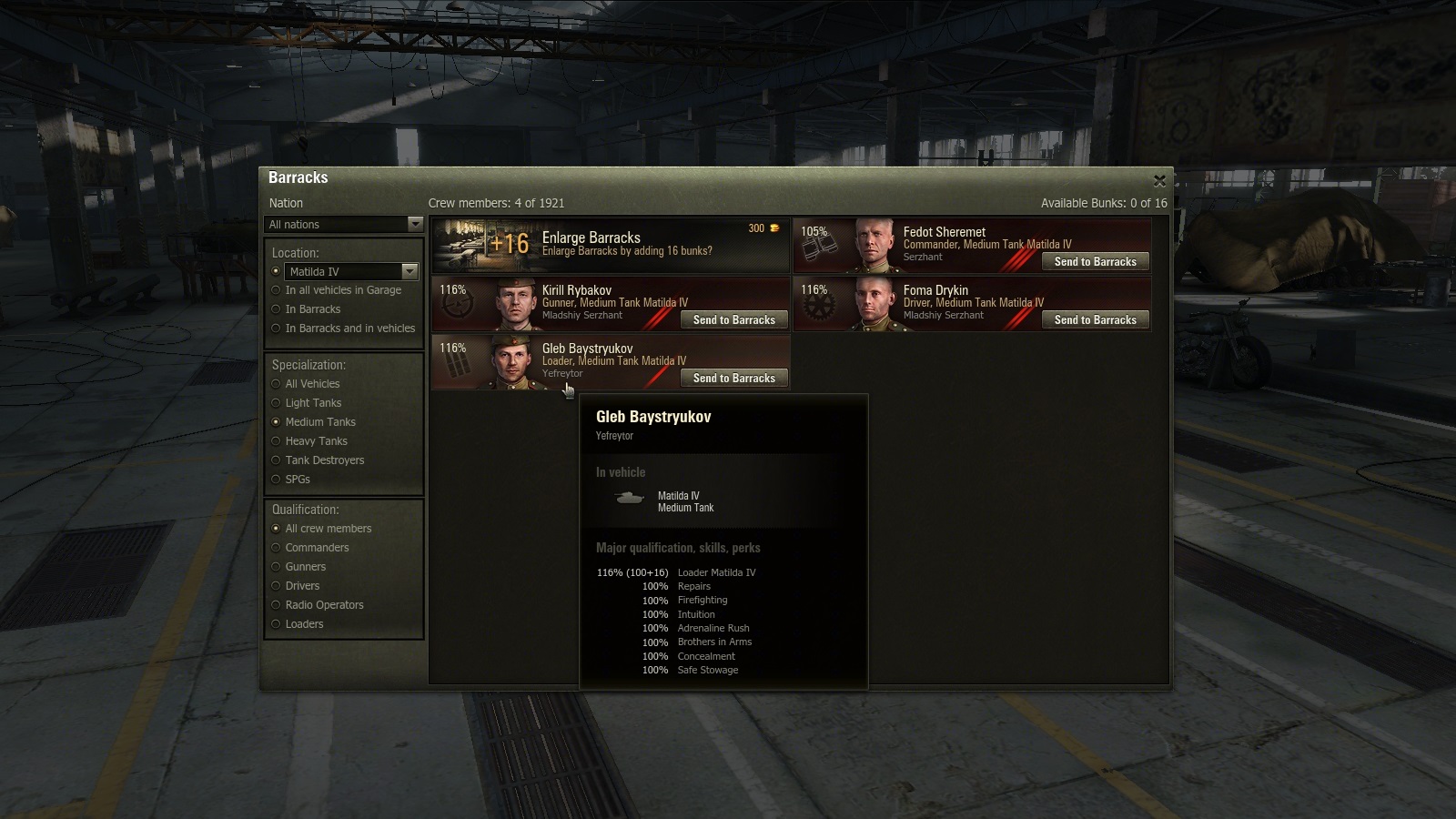 In World of Tanks, a well-trained crew is essential for your performance on the battlefield. Crew members must go through training to learn and acquire various skills and perks that can aid you and your team. This guide offers an overview of each crew skill and perk in World of Tanks, along with additional tips for training your various tank crews.

Each vehicle in World of Tanks must have crew members in order to operate. You can have between 2-6 crew members commanding a tank at a time, and each must fulfil a particular job within the tank, also known as a Major Qualification. These break down into five job roles: Commander, Gunner, Driver, Radio Operator, and Loader.

Crew members gain Experience Points (XP) each time they head into battle, which will then be applied to his personal service record. A crew member’s Major Qualification training level will increase as they accumulate XP over time, until it reaches 100%. At that point, additional XP earned in battle will be applied to the first skill or perk listed, until it also reaches 100%, and so on. The amount of XP needed to complete the first skill or perk will be double what was required of the Major Qualification. Likewise, each subsequent skill or perk will require double the XP of the previous one.

An individual crew member’s Proficiency is based on the combination of his Major Qualification training level, as well as the training levels for each learned skill or perk. The Proficiency of a crew member can impact a vehicle’s camouflage capability, repair speeds, and overall battle performance, which is why having a fully trained crew is so important.

Skills and Perks differ based on the extent to which they contribute to a crew member’s Proficiency. Skills can be applied immediately, but their effectiveness is determined by the percentage of the crew member’s training level. A Skill trained to 50% will be 50% effective to the crew member’s general performance. Perks, on the other hand, only go into effect when the perk training level reaches 100%, and do not apply any partial benefits prior to this point.

Additionally, Skills and Perks are averaged between the number of crew members within a vehicle. For example, if there are two crew members fully trained to 100% in Firefighting within a four-crewman vehicle, then the vehicle will only benefit from 50% of the skill, as only half of the crew are fully trained in that skill.

Below is a list of the Skills and Perks available in World of Tanks, along with a brief description of each.

These skills and perks can be learned by any crew member, regardless of their Major Qualification:

Repairs - Accelerates the speed of repairs to damaged or knocked out vehicle modules. The higher the crew training level for this skill, the faster repairs will be. This skill is available to all crew members.

Concealment - Helps improve the camouflage of the vehicle, reducing the chances of being spotted by enemies, requiring them to come closer to spot the vehicle.

Firefighting - Improves the ability of a crew member to extinguish a fire, and goes into effect immediately upon the vehicle catching fire. Like repairs, the speed in which a fire is extinguished is based on how high the crew member’s training level is.

Brothers in Arms - Improves the Major Qualifications and general skills of all crew members in the vehicle by 5%. Since this is a perk, it’s benefits only go into effect when trained to 100%. Good for when crewmen have three skills or more.

Unlike general skills and perks, these only apply to specific crew members based on their Major Qualification role:

Jack of All Trades (Skill) - Allows the Commander to temporarily replace any wounded, knocked-out, or killed crew members, based on training level.

Mentor (Skill) - Grants additional XP to all crew members, except for the Commander. Increases based on skill training level.

Recon (Skill) - Improves the view range of the vehicle, based on the crew member training level percentage.

Sixth Sense (Perk) - Lets the Commander identify whether their vehicle has been spotted by an enemy. Goes into effect only at 100% training.

Clutch Braking (Skill) - Helps the Driver increase the rotation/traversal speed of the vehicle. Increases with training level, up to 5%.

Controlled Impact (Skill) - Reduces damage incurred from ramming, while also increasing damage done while ramming into enemies. Good for medium or heavy tanks that have high armor on the front of the vehicle.

Preventative Maintenance (Perk) - Reduces the likelihood of the engine catching fire by 25%. Only comes into effect upon reaching 100% training level.

Armorer (Skill) - Improves the accuracy of a damaged gun. If multiple Gunners have this skill, the one with the higher training percentage will go into effect.

Designated Target (Perk) - Targeted enemy vehicles within 10 degrees of your reticle will be visible for an additional two seconds. This perk is not cumulative, so it does not stack when there are two Gunners.

Safe Stowage (Perk) - Improves the durability of the ammo rack by 12.5% by preventing shells from colliding with one another. Goes into effect at 100% training level, and is not cumulative.

Intuition (Perk) - Increases the likelihood of loading the proper shell when switching to another shell type, based on the shell with the best chance for damage. This only works when you manually switch between ammo types, and the gun must completely be reloaded before the perk can go into effect again. Also not a cumulative perk.

Adrenaline Rush (Perk) - When your vehicle has less than 10% health remaining, this perk increases the Loader’s reload speed. This perk is only cumulative when Gun Rammer equipment is also installed on the vehicle.

Signal Boosting (Skill) - Extends the signal range on your vehicle. It’s effectiveness scales with the Radio Operator’s training level percentage, up to 20%. The operator with the higher skill training percentage will be applied.

Relaying (Skill) - Extends the Signal Range of all allied communications for vehicles within range of your vehicle’s radio signal. Scales based on training level, up to 10%.

Call for Vengeance (Perk) - Allows a surviving Radio Operator to report on enemy locations for an additional two seconds after your vehicle is destroyed. Good for light tanks that run the risk of getting destroyed often.

Your effectiveness in battle is determined by the Proficiency of your crew members. Continue to train and level up your crew members so that you can reap the benefits of the crew skills and perks as soon as possible. Head over to our Crew Training Guide for more training details.