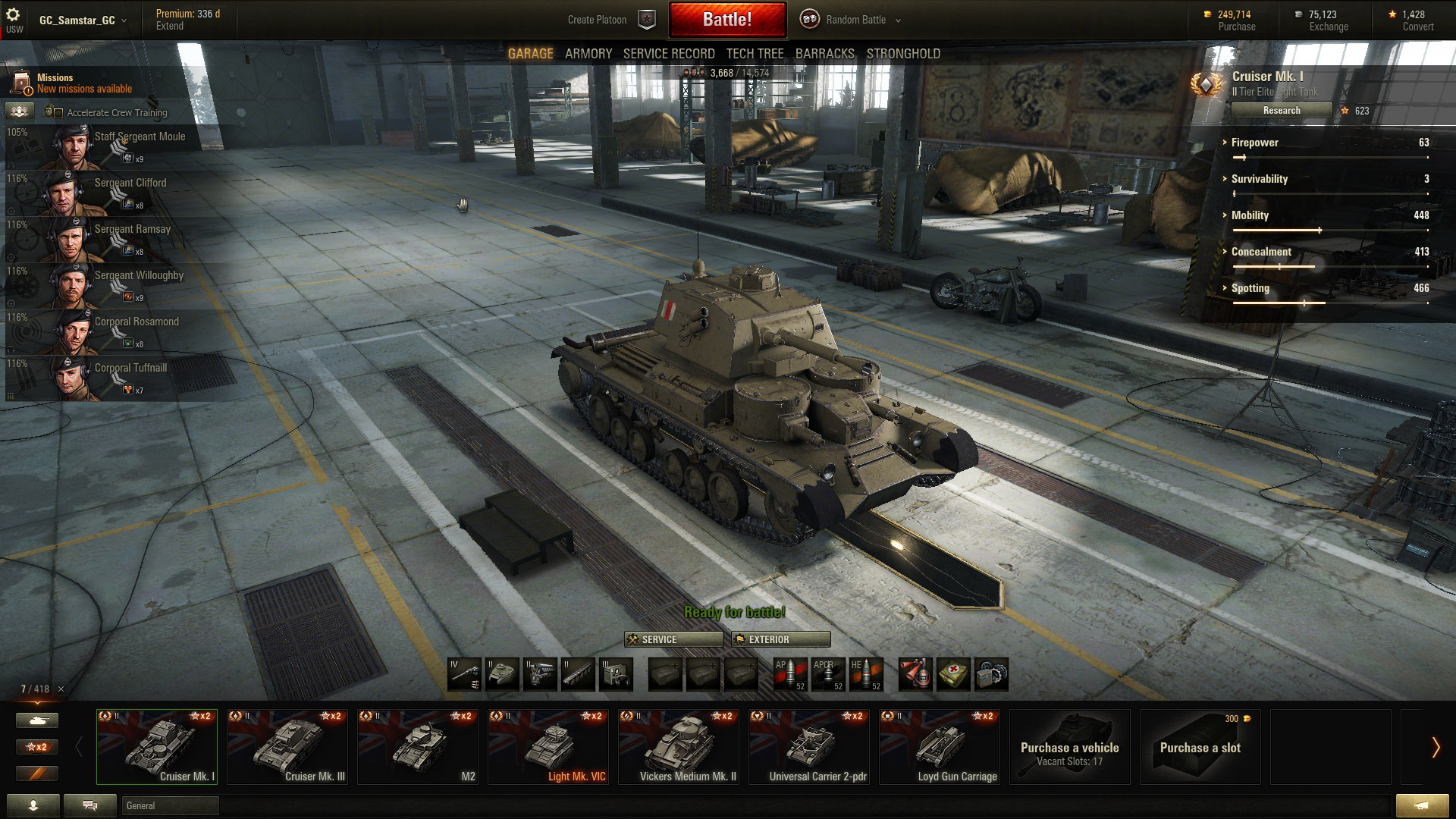 In World of each tank needs a Crew to make it work. Your Crew consists of a few soldiers, between two and six with each having a specific role to fill in the tank. Without a crew to operate a tank, you won’t be able to use it.

Here are the types of crew that you can place into a tank:

Some of the larger tanks that need six crew members require two Gunners or sometimes two Radio Operators. Most of the smaller tanks, such as the tanks that only need two crew members, have that double-up on skills. For instance, the USA’s T1 Cunningham, the Tier 1 Light Tank, requires only two crew members, a and a Driver. The Commander, instead of just commanding, does three extra roles: Radio Operator, Gunner, and Loader. This means if the Commander is knocked unconscious, the Driver takes over resulting is a less-effective tank.

Below is a deeper overview of what each of the Crew Members jobs within the tank.

The Driver is in charge of manoeuvring the tank. The better the Driver’s Proficiency, the easier the will be to handle. The tank will accelerate faster, operate easier over difficult terrain, and will reach a higher top speed with a Driver that is highly proficient.

The Gunner is the man who aims the gun. Improving the Gunner will improve the Aiming Speed, the accuracy of your shots, and the speed at which the turret turns. Having a decent Gunner means the time it takes for your reticule to focus will reduce, meaning speedier aiming.

The Loader’s job is to get the next series of shells ready. The better your Loader, the faster your tank will switch between and reload ammunition.

The Radio Operator is the one who communicates with your allies. Any allies within your tank’s Radio or Signal Range will inform your tank of any enemies they spot. If you’re outside of this range you won’t get to know about it. Increasing your Radio Operator skills allows you to move further away from your allies while still maintaining communications.

As long as you have the funds, you can hire new recruits at any time during your World of Tanks career. These new crew members come randomly generated by the game with their own Major Qualifications for a specific tank. When you select to hire a new member, you can choose to accelerate their training by using currency, either Gold or Silver.

Any new tanks you purchase come with their own crew which you can spend currency on to jump up their training. Alternatively, you can reject receiving crew (in the event you already have ) and purchase the tank without a full crew. You will need to train them up again to unlock their Proficiencies. When they first arrive in your Garage, the crew members will start at 50 percent Proficiency, plus 10 percent of the Commander’s Proficiency.

Sometimes during battle, you will incur damage that takes out a crew member. Whenever this happens, the aspect of the tank that crew member was in charge of will suffer. An unconscious Gunner will not be able to help with aiming, so your gun aiming and accuracy will be reduced. Likewise, a Driver will not be able to drive, meaning your tank will become less proficient at moving.

Purchasing a First Aid Consumable before will let you heal these unconscious crew members to restore your tank to full fighting functionality.

Each of the Major Qualifications specialized Skills and Perks that can be trained. For instance, a Commander has a Skill called “Mentor” where after every battle each crew member receives additional experience. Keep in mind that you can only train one Skill or Perk at a time. After the first one is finished, you are able to select another but the experience needed to train another Skill or Perk increases exponentially.

Understanding how Crew Members work in World of Tanks doesn’t have to be scary. There’s a lot more information about each of the individual perks, the amount of experience needed, and more that you can learn. However, just starting out you should keep in mind all of the above and progress onto the more advanced theories and practices as you get better!