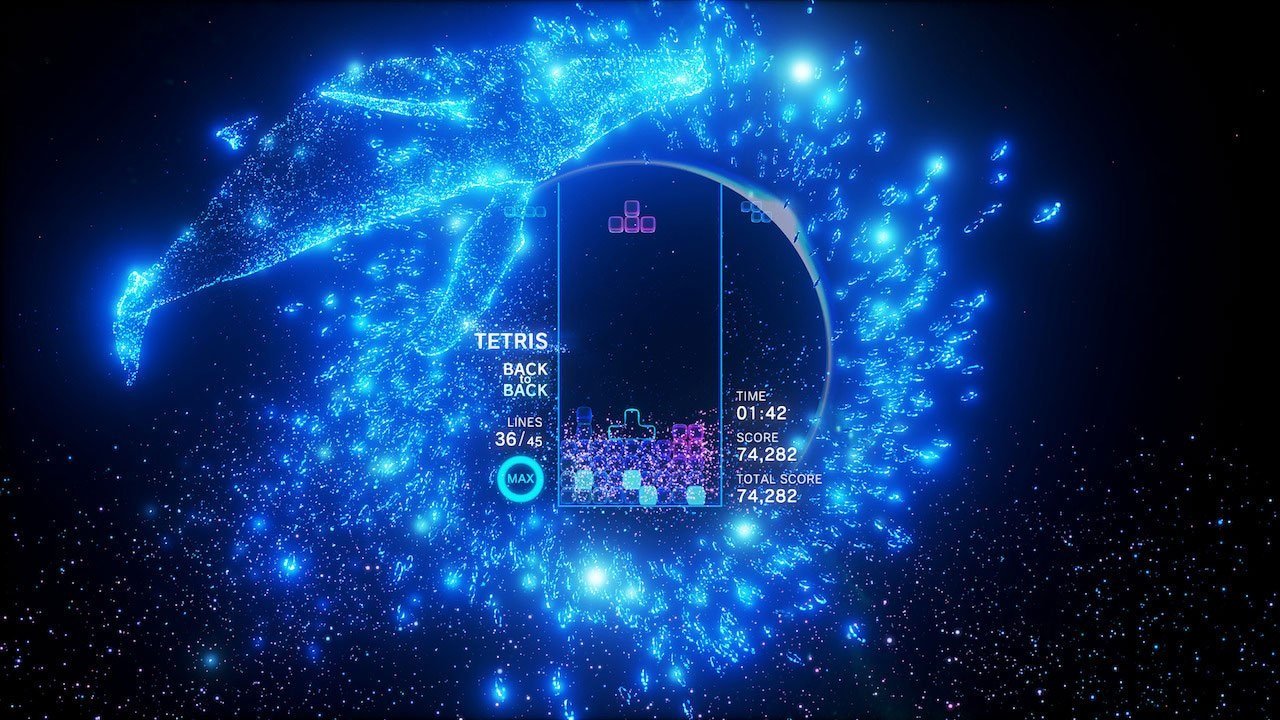 Announced before E3 2018, Tetris Effect is the latest installment in the Tetris series. It consists of the same Tetris gameplay you know and love, but with added music inside a VR setup. Visually, Tetris Effect is reminiscent of games like Rez Infinite and Lumines Remastered. This is no coincidence, as the people working on Tetris Effect are Enhance Games and producer Tetsuya Mizuguchi.

Tetris Effect features standard Tetris gameplay (build and clear lines using Tetriminos) set in an immersive VR landscape. There are new musical cues and colorful visuals to help pull you into the game and keep you playing. Each stage features its own original song which varies in tempo and arrangement.

Every action you take in Tetris Effect from moving Tetriminos to clearing lines features its own musical cue based on the stage your in. This creates a symphonic effect once you get into a steady rhythm in the game. Another new addition in Tetris Effect is the Zone Meter. By filling the Zone Meter you’ll be given the option to stop time and build stacks without any limits or pressure.

The game’s name is based on a very real psychological effect. To simplify it, the more you play Tetris, the more you think about Tetris. The same is true of Tetris Effect. The more you play, the more you get sucked in and want to keep going as you’re dazzled not only by the colorful Tetriminos but by the sounds you’re creating.

According to Tetsuya Mizuguchi, Tetris Effect has been a concept of his for over 15 years. In an interview with Polygon, Mizuguchi explained that he’s wanted to create a Tetris game since the early 2000s with the release of the PSP. Unfortunately, EA had creative license at the time so Mizuguchi put the Tetris idea on hold to create Lumines.

Nowadays, the Tetris license is back in the hands of The Tetris Company, creator Alexey Pajitnov, and Henk Rogers. Talking about the hands behind Tetris, Mizuguchi stated:

“After Lumines, me and Henk Rogers had a long, long conversation about what the future of Tetris looked like, and so he wanted to enhance the zone experience. We had the technique and process finalized. We started production, maybe six years ago?”

“A lot of people when they hear that you can play a Tetris game in VR, they’re like, ‘Are you going to be grabbing blocks and moving things around everywhere? For us, that’s not really what it’s about. It’s about the Tetris experience, which anyone can play, whether they’re a lapsed player, a pro, or someone totally new to it. It’s meant to be a welcoming, relaxing experience.”

Tetris Effect is scheduled to release in Fall of 2018 for PlayStation 4 and PlayStation VR platforms. While you can play Tetris Effect without a PSVR, it’s definitely recommended as the VR version is more of an immersive experience as a whole. For more on Tetris Effect, be sure to check out the announcement trailer below, and let us know in the comments what you think of the game!