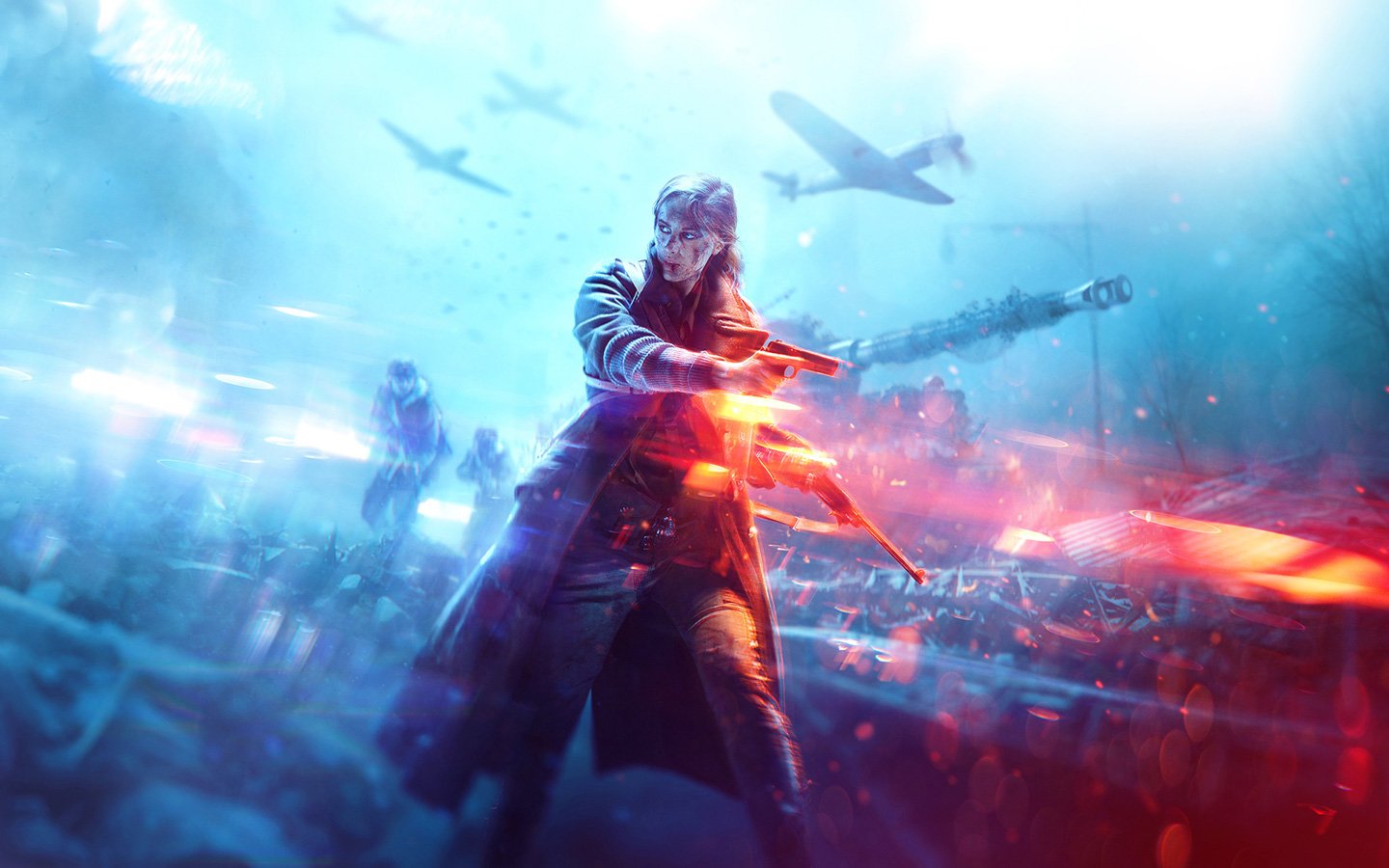 Battlefield V is only a few months away and we can’t wait to get stuck into the gritty action. The WWII setting may seem like well-trodden ground at this point, but DICE has kept things fresh by adding in loads of exciting new features and gameplay tweaks to make it the most chaotic Battlefield game to date. We’ve summarized all the game-changing features coming to Battlefield V below, so read on and get the hype-train rolling.

An abundance of animations

In the trailer we saw soldiers diving out of windows, crawling on their backs, catching ammo, tossing back grenades and being knocked onto the ground by explosive blasts. DICE has added a whole bunch of new animations that are designed to give a sense of weight to nearly every action you perform, while adding realistic movements and reactions to certain in-game mechanics. Soldiers who run through waist-high water will lift their knees to quicken their pace, while running on unstable ground with little traction will increase the likelihood slipping and falling over. These additions may be rather small in nature, but when combined together, they have the potential to add a whole new dynamic to the look and feel of the gameplay.

Build 'em up, break 'em down

Battlefield players have wanted the option to build defensive structures for a while now and DICE has seemingly answered our prayers. In Battlefield V, all classes have access to a tool that allows them to erect makeshift defences and fortify existing structures. If an enemy tank happens to blow a gaping hole in an allied defence, then you can either tuck tail and run, or you can patch it up with some sandbags. It may not have the same defensive properties, but it could save you and your fellow comrades from a bullet riddled death. Fox holes, trenches, sandbags, barbed wire and tanks trap were also announced, so there are plenty of options available for makeshift engineers. It’s also possible to move field artillery and AA guns via tanks and half-tracks, so there’s a lot more experimentation and player choice involved when setting up fortifications.

A spot of change

In previous Battlefield games you could keep mashing the spot button to reveal any enemies that happen to be in your soldier’s field of vision, regardless of whether or not you personally had noticed them. While pinpointing enemy locations is incredibly useful to your teammates, it’s not a particularly engaging way to reveal soldiers. In fact, it was all too easy to disclose potential threats without even paying much attention. Thankfully, the way you spot enemy units is completely changing in Battlefield V. Instead of constantly hammering the spot button and shooting at random enemy icons in the distance, you’ll now have to scan the world around you and actually observe potential threats. For example, you may hear the rustling of grass followed by the sharp crack of a Gewehr 98 - a telltale sign that a German scout is hiding nearby. Much more so than previous Battlefield games, DICE’s latest title requires you to read the world around you as opposed to relying solely on your HUD.

One of the biggest changes coming to Battlefield V is how squads function. There’s now an increased weight on team play, and when you queue up for a game you’ll automatically be put into a squad. Of course, you can choose to leave if you prefer to be a solitary soldier, but there are some big benefits to working with your virtual buddies. For starters, if you die you can quickly view what members of your squad are doing before you redeploy. This avoids a lot of the frustrations of spawning and instantly dying, while also allowing you to quickly get back to the frontline action. Aside from health, ammo and quick redeployment benefits, you’ll also be rewarded with squad points that can be spent on perks such as a tank barrage, or even a V1 rocket. It definitely pays to play as a team in Battlefield V.

While Battlefield 1 was praised for its immersive and bloody battles of the First World War, it did have a few problems. Many fans disliked the randomised weapon recoil that was introduced. This feature gave each gun an unpredictable firing pattern, leaving you guessing as to which direction your crosshair would be sent. In Battlefield V every gun will have a much more predictable recoil pattern, making it easier to learn and manage during firefights. This small change not only increases the overall skill required, it also rewards players who take the time to master a particular weapon. The typically clunky bipods will also be much easier to set up and use, so there’s a lot more freedom on offer when you need a little more accuracy.

Bullet penetration has been ramped up and players will now be able to tear through wood, brick and metal surfaces. Many structures will actually start to show signs of wear and even begin to fall down if you pump enough rounds into them. No longer will you have to rely on explosives or vehicles to disperse that pesky sniper camping in a house. Of course, there will be structures that you won’t be able to shoot through, and a lot of it comes down to common sense. Meanwhile, tank-mounted machine guns will deal more destruction than ordinary infantry weapons, so we can expect certain firearms to do a better job than others.

Everything you do in Battlefield V requires a physical input and creates a resulting action. Find yourself low on health and you’ll need to locate a friendly medic then interact with the med kit they drop. The same goes for ammo as well. Gone are the days of simply hunkering down near an ammo crate and passively gaining more bullets as you burn through your rounds without a care in the world. If you’re in need of resources you’ll physically have to locate and interact with them. Each interaction will come with its own animation as well, making for a more authentic experience all round. This applies to movement abilities too; if you want to run and grab a ledge you’ll need to time the appropriate button press right to pull the move off successfully. Players will need to be more reactive than ever if they wish to survive the harsh theatres of WWII.

Gone are the days of simply sticking a syringe into a friendly soldier or shocking them back to life with a click of a button. Mass revive trains are now a thing of the past and medics will need to be a little more careful when giving friendly soldiers a new lease of life. To resurrect an ally medics now have to go through a revive animation that takes a few seconds to complete, further increasing the risk vs reward playstyle of the class. The animation can be canceled at any time, so you can quickly retreat if shots start coming your way. However, this doesn’t mean you have to leave your fallen buddy behind as you can now drag them into cover and begin reviving them in relative safety. Every class can revive soldiers in their own squad, but the animation is much longer and it won’t give the player full HP, ensuring medics are still a vital asset to any team.

The assault, medic, support, and scout classes can now tailor their role towards one archetype within their individual field. For example, an assault player could specialize in both anti-infantry and anti-tank, or they could choose to hone their skills towards one specific role. DICE didn't go too heavily into the specifics here, but they did mention that the game’s skill trees will offer a significant amount of control over how your role both feels and plays. Having this amount of customisation and player choice is certainly a bold move and it will definitely bring about a more personal experience – an area previous Battlefield titles have lacked.

Rejoice! DICE has finally decided that splitting up its playerbase and locking content away behind huge paywalls isn’t such a good idea, especially when you’ve already coughed up the initial entry fee. Instead, all of the maps and modes will be free to everyone who purchases the game, while skins and customization options can be either bought or unlocked by simply playing. The new progression system is called Tides of War and this feature will include daily, weekly and monthly challenges, while questlines and limited-time events will give players the opportunity to secure unique items and cosmetics. Frankly this news is a huge relief and makes the cost of entry to a Battlefield title far more palatable for the average gamer. It all sounds rather marvellous and we can’t wait to jump in!