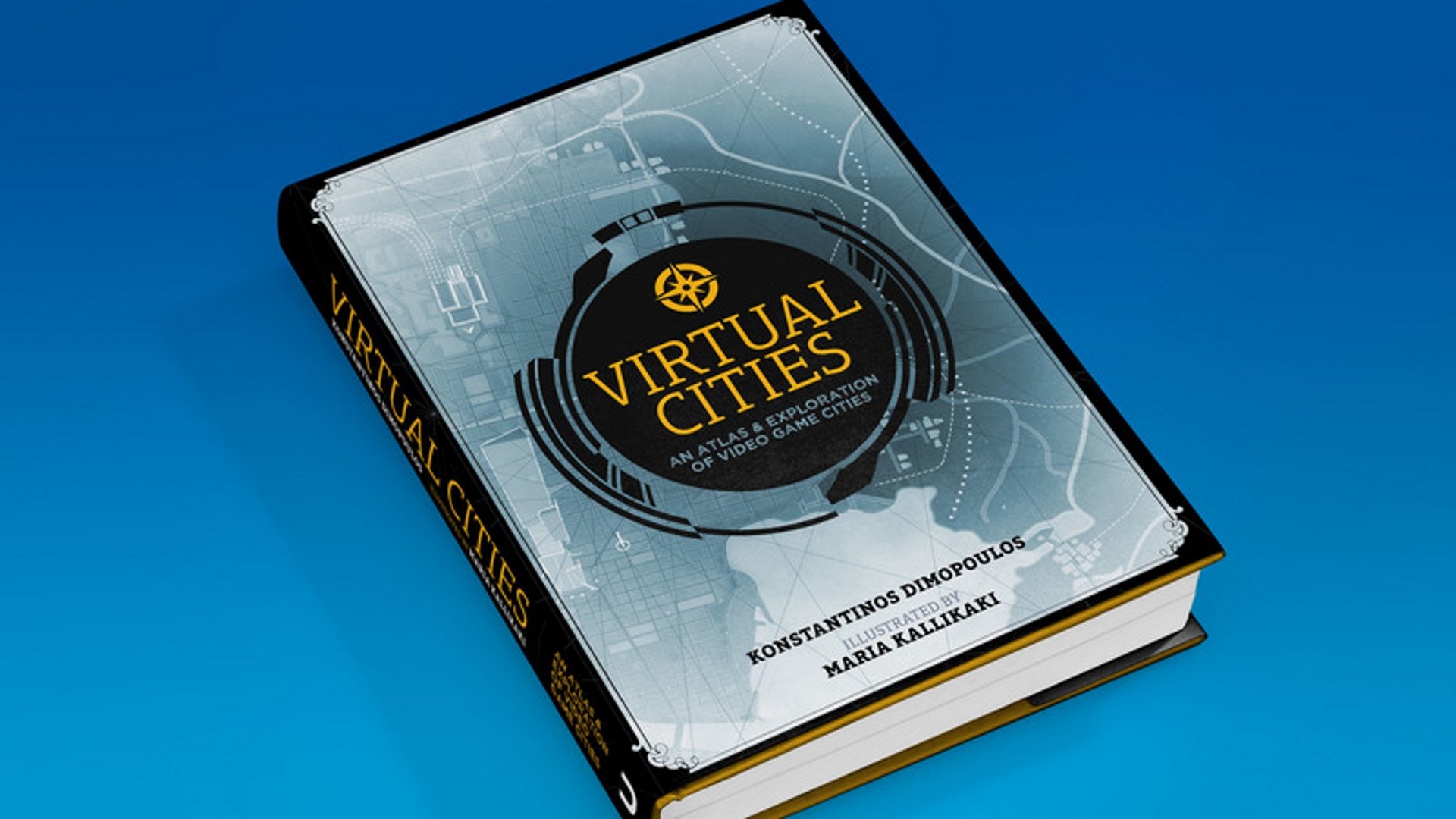 Konstantinos Dimopoulos on the design secrets behind our favorite virtual cities

From the rat-ridden streets of Dishonored’s Dunwall to the pristine towers of Glass in Mirror’s Edge, video game cities offer the chance for designers to experiment in culture, architecture and planning. A good city tells the story of the world around it, even without its inhabitants in view. Crucially, a city needs to not only look but feel believable, lived in, maybe even alive. Video games are flooded with urban locales, but only a few achieve the unique level of immersion required to feel truly real.

Konstantinos Dimopoulos is a game designer, engineer and writer whose fascination with video game cities has led him to the role of game urbanist, consulting on and creating the metropolises of the virtual world. Alongside visual artist Maria Kallikaki, Dimopoulos is currently crowdfunding production of his new book, Virtual Cities: An Atlas & Exploration of Video Game Cities, a catalogue of the finest urban sprawls video games have given us, and the influences they draw upon. We had the chance to speak with Dimopoulos on the enduring appeal of great cities, as well as the secret touches that bring them to life.

What is your favourite city in a video game and why?

KD: I have to admit that deciding on a single city to call my favourite is exactly as easy as picking a favourite game of all time. I love the towns of Monkey Island, and was always fascinated by the sense of place Gabriel Knight's New Orleans achieved. I’m also impressed with how evocative and forward looking 8-bit Antescher is, and can't help but admire the vibrant civic worlds of the Mafia games or the imagination and detail poured into the cities of Dishonored and Assassin's Creed. Choosing a favourite is nigh on impossible.

If someone put a gun to my head and forced me to pick a single one, well, that would have to be City 17 from Half-Life 2. Besides being a highly atmospheric and unexpectedly believable place, City 17 was groundbreaking and economically designed. A masterclass in believable, immersive, and intriguing city design that served both the game and its story brilliantly.

What makes a video game city interesting to you?

KD: Initially it's all about the overall concept of a city; the more exotic, more detailed, and more unexpected it promises to be, the more intrigued I will be. A good idea though is far from enough. What I really appreciate is just how believable such a city feels. How successfully it helps me suspend my disbelief, and how masterfully it fools me into thinking that this could be an actual urban setting. Cities that achieve this sort of spatial immersion are what I'm looking for.

On a more professional level, I’m always on the lookout for clever tricks, little details, intriguing planning configurations, and the methods and tools employed to make virtual cities fit in with narrative and gameplay needs.

Do you remember the first time you joined your interests in planning and games together?

KD: I actually do! It was after giving up my academic career when Greece's universities started feeling the incredible pressure of the economic crisis, after releasing my first commercial game with Kyttaro Games (Droidscape: Basilica), and after failing to get an incredibly intriguing, city-focused RPG project off the ground. Working on this latter game and thinking urbanistically about its setting was what finally made me believe that combining games and urbanism was both an incredibly interesting endeavor, and something that could prove professionally viable. Also, something I could do really well. The first city I decided to revisit and look at after deciding that game urbanism would be what I'd be doing was City 17.

What do you find are the biggest urban planning sacrifices when cities are built according to game design instead of to be lived in and used by actual citizens?

KD: It really depends on the type of game, its needs, aesthetics, and of course budget to be honest, but such sacrifices usually do not have to be crippling. When things are handled correctly, most of those sacrifices simply remain hidden or unnoticed. Even the inescapable fact that the biggest game city is tiny when compared to actual towns can be successfully masked, as civic size can be implied in a variety of ways.

Are there any pet peeves you have, like civil engineering inaccuracies that seem to keep cropping up across games?

KD: Well, I do despise L-shaped roads, and I do believe that the cyberpunk trope of calling cities Neo/New Something hasn't aged that gracefully, but those are details. I mean, yes, New York is definitely not an evolution of the city of York, and L-shaped roads are the rarest ones on Earth, but they aren’t so glaringly wrong as abstracting a medieval fantasy town into five residences, a tavern, and twelve shops, ignoring any sense of civic structure, or simply forgetting to incorporate crucial urban functions (such as residence).

I would say that my pet peeve is getting the civic scale wrong, and somehow expecting me to believe that there's a single car mechanic in your vast sprawling metropolis, whereas this tiny village happily supports a nuclear reactor.

Most people enjoy the escapist aspect of games, being able to disappear into a fantasy world completely separate from our own. How do you balance city-building best practices from our realm with the rules of these fictional worlds? Is it difficult to gauge how well a city is designed when it's being used by 12 different races of varying heights and abilities?

KD: Balancing the geographic and city-building rules of contemporary science with fantasy settings is not as difficult as it sounds. When constructing a new world things must simply make sense, and the way they would make sense for tree-living elves or sci-fi cyberthieves wouldn't be too different from the way they make sense to us. At least on a fundamental level; gravity can exist and function under the same rules, and a city has to offer some reason for its inhabitants to be there.

It’s not functionality and 'good' planning that bother me when designing or consulting on a game city. You see, even in real life good city planning is not objective. What's desirable for the real estate sector could be hellish for working people. Planning doesn't have to be good or fair to be believable, so what I care most about is the perceived functionality of things, and the fact those 12 different races can live together without insulting the setting's lore or common sense.

Is it typical for games to cheat the layout of a building or city?

KD: Not just typical, it's the norm. In the defense of game cities across the medium's history though I would argue that cheating the layout is necessary, and thus far from mutually exclusive to a well thought out design. Carefully implementing tricks and illusions --from the cunning selection of intraurban routes to blocking off areas and having skyboxes blend with urban space-- is part of a good virtual urban plan. Actual cities are built and shaped over hundreds of years by millions of people, and managing to precisely emulate the effect of this process with even a couple dozen people over a year would simply be impossible.

What are the smallest details that players may not notice consciously that really help breathe life into a city?

KD: There are a myriad things players wouldn't probably notice anyway, yet sometimes there's too important a detail that's off and suddenly a city feels wrong. Even when playing something as hectic as a FPS, people will notice inconsistencies and omissions. Details that could really help liven urban spaces up include well designed public spaces, wall art and graffiti, signs, prevalent fashions, garbage, sounds, urban fauna and flora, materials, and even the weather to name just a few.

Urban infrastructure, on the other hand, can often be safely simplified, and we can easily do away with many non-defining architectural details, and several types of street furniture.

Is there a most common source of architectural or cultural influence that games tend towards designing with?

Virtual Cities: An Atlas & Exploration of Video Game Cities promises roughly 200 pages and 40 maps covering iconic cities such as Fallout’s New Vegas, Silent Hill and Half Life’s City 17. If you’d like to support Konstantinos Dimopoulos’ work, you can pledge to fund the book on Unbound.