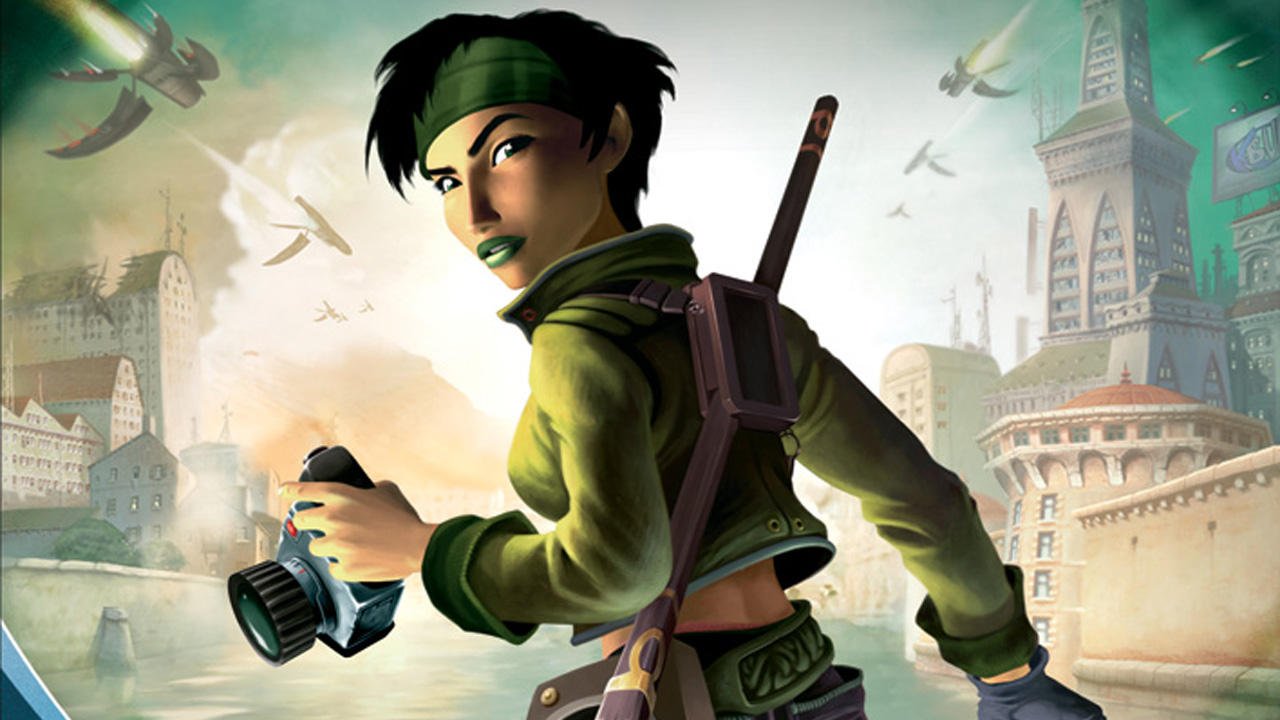 The world wasn’t ready. That’s one theory. Want to know why news of a Beyond Good and Evil prequel is spinning heads? Play the original! Or, come and read what we have to say…

2003 was a lifetime ago, but Star Wars: Episode IV introduced the Force in 1977 and we’re still watching that. We. Are. Still. Watching. Star. Wars. Episode. IV. There are lots of people who feel a similar passion toward Ubisoft’s action-adventure, Beyond Good and Evil, released on PlayStation 2 (not 3), original Xbox and GameCube (a cool thing from Nintendo) years back.

This isn’t an internet bandwagon thing. It’s a genuine, understandable appeal that we’re fully on board with. Beyond Good and Evil was special. In fact, let’s start with the game being kind of aware that it was special as the fundamental reason it failed to light up the retail charts.

Just as a frame of reference: Super Mario Sunshine, and The Legend of Zelda: The Windwaker (GameCube); Ratchet & Clank, and Kingdom Hearts (PS2); and Splinter Cell (Xbox) launched one year before Beyond Good and Evil. We had all the popular blockbusters covered.

No matter how the gaming magazines and websites of the time all lauded it, Beyond Good and Evil couldn’t be anything like as special as the titles just mentioned. Or could it? Well, yes. And no. Both positive and negative reviewer comments amounted to something suspicious.

Beyond Good and Evil was among the first major games to be hailed for artistic qualities – not just ‘good graphics’ or ‘great music’, but for being influenced by the works of Miyazaki, and boasting an eclectic original soundtrack by Christophe Héral. It was a visionary project from game director Michel Ancel, creator of Rayman. It was filled with all kinds of references that didn’t measure up to the usual criteria that gamers had grown accustomed to acting upon.

Looking under the rug, the game could be completed in under seven hours, it had horrible camera issues, the combat – though cool – seemed like an obligatory addition, and even the art critics cited the UI as being unwieldy. Some political undertones in the story were hard to place one way or the other in the pros and cons. Lately it’s been revealed that 9/11 had an influence on its direction.

Good and evil reasons that count

In a post Shadow of the Colossus world — the game which justified Ico and any other prominent ‘art game’ brought to our attention — it’s easier to accept Beyond Good and Evil as a thing of uncommon beauty; being rough around the edges arguably just contributes to this charm.

The universe in which events unfold, chiefly among the bizarre peoples and environs of planet Hillys, feels consistent in its vivid presentation. Lead protagonist Jade is cool because she kicks-ass and acts meaningfully, as opposed to being this cynical poster girl. Though we still wonder why our sidekick, Uncle Pey’j, is a pig-man, he has some great lines too, and underpins the Mos Eisley-influenced, multi-species motif of the setting.

Gameplay is varied, with racing and puzzle solving thrown in amid world exploration, slick combat (unnecessary or not), cinematic run-and-jump sequences, stealth and… photography!

Jade’s role as an intrepid photo-journalist for the IRIS Network leads her to infiltrate the government’s Alpha Section, whose motives in the state of constant war are highly suspect. Sending Jade into action armed with a camera to expose evil with the truth was the stroke of genius that distanced Beyond Good and Evil from its more mainstream rivals. The associated stealth sections, and streamlined context-sensitive command system all resulted from the tension-building focus of one smart, narratively driven component.

This conspiracy busting plot gave us something to care about while considering if the boss fights against Reaper or the DomZ Sea Serpent were somehow incongruous. Furthering Jade’s noble cause even excused the spurious hovercraft races. Taking snapshots of the world that Michel Ancel’s team had lovingly created was an exercise in art appreciation in itself.

Ubisoft wasn’t done with mashing together genres after Beyond Good and Evil, and we saw echoes of Jade in the form of Altaïr Ibn-La'Ahad with Assassin’s Creed only a few years later – the transitional combat moves versus multiple foes, lots of context-sensitive clambering, and don’t forget the stealth. We can safely add ‘influential’ to the accolades laid at the foot of Michel Ancel’s labor of love long after the fact.

Pressure has been on Ubisoft for a sequel ever since the French publisher rolled a trailer for the follow-up as far back as 2008. In 2017 a second, considerably more action-packed reveal proved that Ubisoft wasn’t done taking liberties with gamer preconceptions. Doing away with beloved heroine Jade, the new game was presented instead as a prequel, set before her birth.

Fans looking for anything to grab hold of can point to a new anthropomorphic protagonist alongside another charismatic female lead. Stylistically, Beyond Good and Evil 2 seems more Luc Besson than George Lucas, with shades of The Fifth Element in a high-speed chase through traffic. We’ve been reassured that composer Christophe Héral is returning to provide the musical score, and co-writer Jacques Exertier is collaborating on script. So far, so mainly good.

It would appear that Ubisoft has marked a more mature audience as its target, since the 2017 trailer featured trashy language unsuitable for kids. While this is the kind of move that should guarantee campaigners lay down their drums and reach for controllers some years from now, it’s putting up a wall that we’d argue doesn’t need to exist in our view.

Beyond Good and Evil is being shown at this year’s Electronic Entertainment Expo (E3), taking place from June 12-15. Big things often happen at E3. We’d settle for knowing which platforms the prequel is heading for, even if we’re told to wait another 10 years to actually play it.