How to improve morale in State of Decay 2

Stop fighting and injuries in your community by raising morale in State of Decay 2. 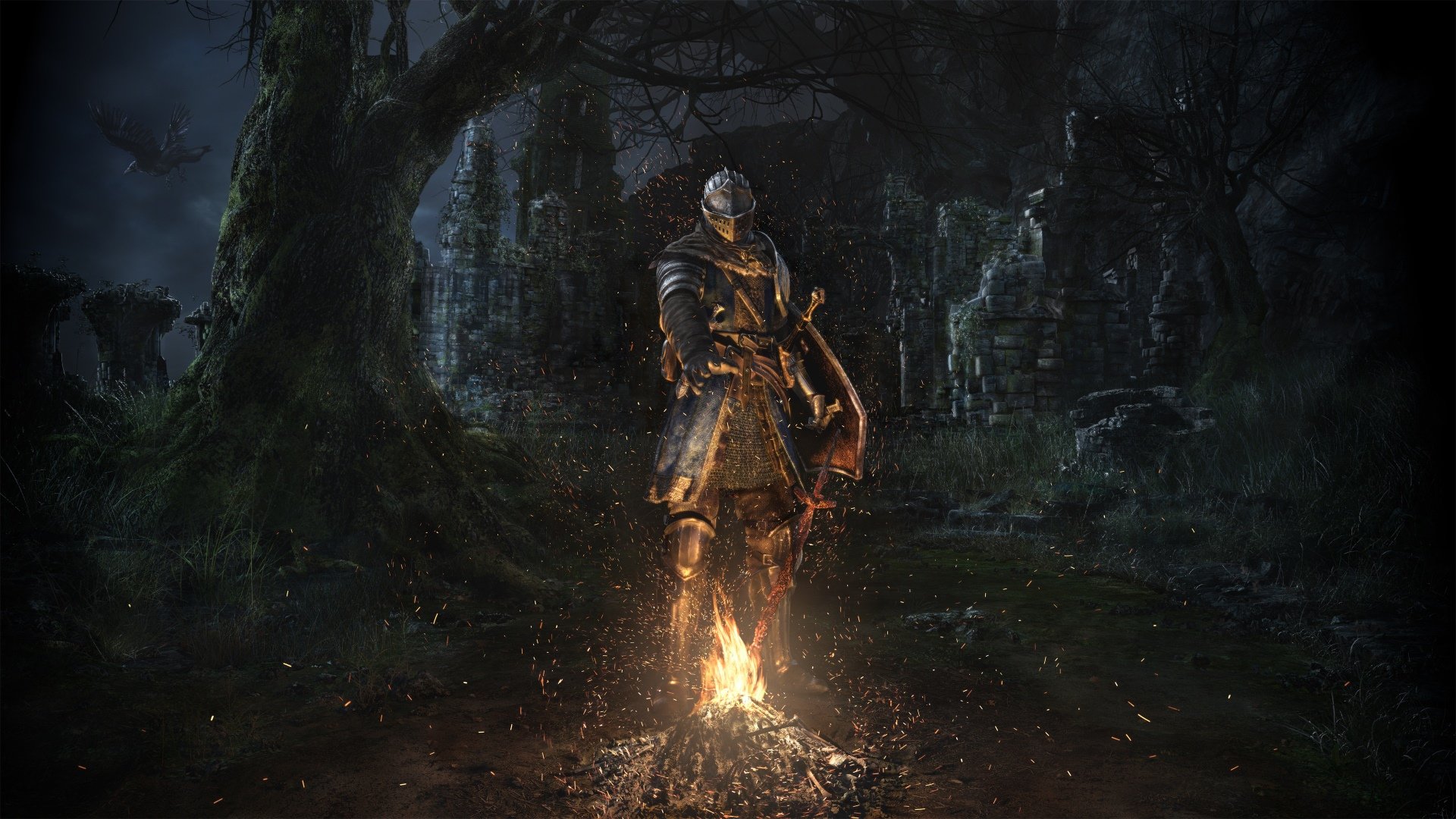 Dark Souls Remastered is almost upon us, and the renowned game’s revival will see plenty of new players enter the land of Lordran. Whether you’ve played Miyazaki’s masterpiece or not, its influence on gaming has been hard to miss. Dark Souls is notoriously difficult, but its challenge extends beyond combat and into the understanding of the world itself.

Dark Souls invests little effort teaching you its story directly, yet those who look deeper discover a rich and fascinating backstory to Lordran and its inhabitants. The full history is hidden within obtuse, often unreliable dialogue as well as countless item descriptions, which means it’s more than easy to feel a little lost starting out. In this article we aim to give new and returning players a lore catch up, granting an entry-point of understanding for the world without spoiling too much for those keen to uncover its secrets for themself.

An intro to Dark Souls

To give credit where it’s due, Dark Souls’ opening cinematic does a great job setting the scene. A long time ago, the surface world was shrouded by fog and ruled by a race of immortal dragons. One day a great fire began burning underground, causing an imbalance that awakened a race of humanoid creatures.

Within the flames these humanoids found the souls of Lords which granted them immense power and size. Gwyn, the Lord of Sunlight, led an assault against the dragons and, aided by the betrayal of Seath the Scaleless, defeated them. A new Age of Fire began and sparked several thousand years of Gwyn and the other lords’ dominion over the world. However, the first flame eventually began to falter and Gwyn chose to unnaturally extend the Age of Fire — for a time at least. Unfortunately, this also created the curse of Undead, a plague which began to mark people across the land with a brand known as the Darksign.

Your journey in Dark Souls begins a thousand years from these events, in a time of dwindling light. The flame has begun to wane once more and the Age of Dark is close at hand. You are Undead, a human cursed with the Darksign that leaves them incapable of permanent death, respawning instead at a bonfire. Each death turns Undead more and more hollow until their minds and Humanity are entirely lost. These husks of men and beasts hunger for Humanity and souls, and will attack you on sight to claim them.

Why are you here?

The beginning of the game sees you locked in the Undead Asylum. Immunity to death has led the Undead to be considered a problem, so many have been rounded up and left to rot in a cage until the end of days. However, all is not lost and another figure soons relays the prophecy of the chosen Undead: one who could escape the asylum and ring the bells of awakening. It’s this mantle you’ll take up, at least for the first portion of the game. As the chosen Undead, your “destiny” is to rekindle the first flame as Gwyn did before you, extending the Age of Fire. To do this requires ringing the bells of awakening, recovering the Lord Vessel and claiming four Lord Souls to fill it. Exploring Lordran’s many secrets may offer other paths to you, but we’d rather not spoil those for you here.

What are souls and Humanity?

One of Dark Souls’ basic tricks is in its handling of accepted terminology, most notably souls and Humanity. You might have a concept of these in the real world, but Dark Souls does things a little differently. Souls are a form of power. In-game they act as currency: harvested from your foes, they can then be spent to level up or purchase weapons and goods from suppliers (or in the case of boss souls, traded to produce high-level weapons). Souls are coveted by all creatures and enhance those who consume them. The greater the soul, the more powerful the being that posseses it. In the opening to Dark Souls we see four beings claim the original Lord souls: Gravelord Nito; The Witch of Izalith; Gywn, Lord of Sunlight; and the Furtive Pygmy. It’s the latter of these that ties in closely with Humanity.

While Nito, the Witch and Gwyn took powerful souls and used them to exert their will, the Furtive Pygmy instead claimed the unique Dark Soul and began to split it, creating the race of Humans. Each human was given a sliver of this Lord soul known as Humanity which appears in-game as a dark, shimmering shape. Consuming it will reverse the player’s Hollowed state, returning them to their “normal” and human appearance.

Humanity is far from a blessing, however. The Dark Soul was unique in its ability to split without loss of power, essentially replicating itself endlessly. Rampant, unchecked spread of Humanity in one human known as Manus spawned the Abyss, a corrupting environment which threatened to engulf the world until Manus was slain.

Dark Souls’ representation of Humanity as a notably dark and corrupting influence is one of its most interesting points of discussion, but we’ll leave it up to you to investigate further if your interest is piqued.

If you know nothing else of Dark Souls, you’ve probably heard the phrase “Praise the Sun!” bandied about online. You’ll meet many interesting characters in Lordran, each with a story to tell, but none gained quite the same reputation as Solaire of Astora. A member of the Warriors of Sunlight (or Sun Bros as they’re affectionately known), Solaire is an Undead much like yourself, exploring the land to find his own light and work in service of Gwyn. As any good pal would, he shows up repeatedly throughout the game to give you a hand with some of the toughest bosses you’ll face. In a game as bleak as Dark Souls, it’s no wonder fans felt drawn to this lone, cheerful face. Praise the Sun indeed.

The Legend of Artorias

Artorias the Abysswalker is a name that will crop up repeatedly on your journey. Praised as a legend, Artorias was one of Gwyn’s finest servants. A renowned warrior, he was devoted to stemming the spread of the Abyss, travelling deep into corrupted land with his wolf companion Sif to combat Manus, Father of the Abyss. In one excellent DLC chapter to Dark Souls you’ll get the chance to travel far into the past and uncover the truth to Artorias’ legend.

Siegmeyer is a knight from Catarina who enjoys dressing up like an onion. What more do you need to know?

That just about does it for a spoiler-free introduction, but there’s a treasure trove of further topics to explore, from the children of Gwyn to the failed attempts by the Witch of Izalith to recreate the First Flame. While many may prefer to go into the world blind, Dark Souls is equally enjoyable to play through after reading up on its history. It’s worth noting however that it’s perfectly possible (and enjoyable) to play through the game without any knowledge of Lordran or its history, so don’t worry if this all feels a bit overwhelming.

If you are interested in learning more then we heartily recommend checking out YouTuber VaatiVidya’s detailed series on the background of various characters, Rich Stanton’s spoiler-heavy breakdown on Eurogamer, or even lets plays such as The Crate and Crowbar’s (with Stanton at the wheel once again) or Eurogamer’s ongoing series by Aoife Lockhart and Johnny Chiodini.

The world of Dark Souls is complex, engaging, and leaves much up to interpretation. If you’re anything like us you’ll swiftly get lost down a rabbit hole of lore without any desire to find a way back out. Have fun out there, but try not to die.