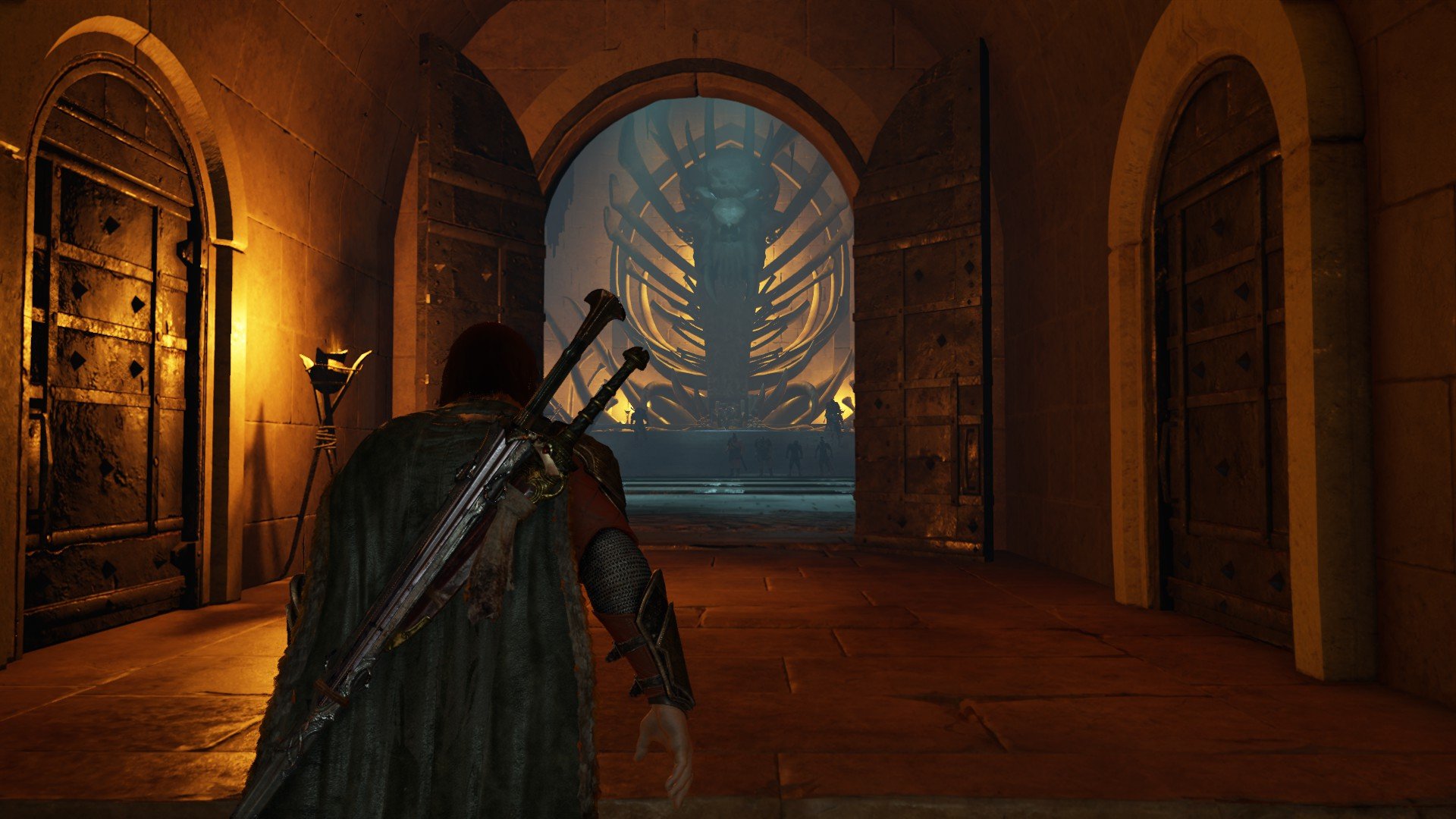 Middle Earth: Shadow of Mordor feels like attending an unusual banquet. The table is filled to the brim with succulent dishes, but each time you try to enjoy one, an aggressive waiter insists you try his dish too, forcefully piling its contents onto your plate. The food is great, but could you just get a moment's peace to enjoy it, please?

Okay, perhaps we’re not being entirely fair. Shadow of War is and extremely generous game. Every inch is filled to the brim with ideas, unexpected scenarios and, well, stuff. It honestly feels like the developers didn’t know when to stop adding things. It’s just a shame that the opening highlights the worst aspects that carry on throughout.

Shadow of War begins in Minas Ithil, a densely packed city at the heart of a war between Sauron and the people of Gondor. A crowded place, you’ll struggle to find a single street that isn’t packed with orcs waiting to be sliced and diced. Stray ever so slightly from the tutorial quests, and you’ll also run into an orc captain and the notorious Nemesis system — though the opening does little credit to the superb mechanic. The Nemesis system was Shadow of Mordor’s crème de la crème, but the tight streets of Minas Ithil are so crammed that you’ll struggle to run ten seconds without meeting a new captain, and that’s not to mention the countless other ways they can pop up to face you.

Not 30 minutes in, we’d just killed a group of unsuspecting orcs and noticed a prompt to poison a nearby barrel. Eager to test the feature, we complied — much to our folly. Within seconds we were accosted by a captain over ten levels higher than our rank, who berated our amateur efforts before  offering an education. Scattering poisonous bombs which downed us in an instant. Not the finest start to learning the game’s basic mechanics.

These interactions are no doubt meant to be a great moment for players, and later in the game they certainly can be. These surprises give those experienced with the previous title a chance to say wait, they can do that?, but as three more ambushes came within the space of half an hour, surprise rapidly gave way to frustration. Isolated, each interaction is a fantastic bit of game design, but the constant onslaught quickly becomes exhausting. It isn’t helped by the often messy combat. The freeform hacking and countering works well for smaller fights, but having a crucial finisher mistargeted as you’re swarmed by orcs can cause lot of unnecessary aggravation.

To compensate for the increase in enemies, Talion’s traversal abilities have also been enhanced, letting you race across the landscape at breakneck speed. This helps you avoid combat for the most part, but does nothing to offer respite. When you’re not battering orcs, you’re sprinting through the level, hitting buttons in time with your leaps to pick up speed. The entire game it relentless, rarely giving you a moment to breath or experiment. Had the entire pace been taken down just a notch, the perfect medium could well have been achieved.

Fortunately, Shadow of War improves dramatically once you’re out of the city, granted the power to dominate, and let loose to wreak havoc on the Nemesis system. Aside from some passable story quests, the core of game is spent conquering fortresses in three regions. Monolith have certainly listened to complaints over the previous game’s drabness, as you’ll now range across the fiery base of Mount Doom, thriving forests and even snowy peaks, a refreshing change from Mordor’s endless brown waste.

Each sector has its own hierarchy of orcs to battle, including a series of warchiefs and a warlord at the top. To claim a region as your own you’ll need to raise an army from the captains there before assaulting the Fortress. Though the game holds your hand for most of the first region, the route to success is largely left up to you.

You could train your captains before taking the fight head on, or infiltrate the warchief’s ranks, sending your followers to prove their worth in the fighting pits before betraying their would-be masters in the final assault. You could even supplant every warchief’s bodyguards with your own men before luring them out into a brutal betrayal. Building up your roster of captains and spies to dismantle your target takes time and effort, and it’s undeniably satisfying for it all to culminate in a successful raid.

These final battles are huge assaults featuring a staggering display of units on screen. After gearing up your army, you and a selection of captains assault the compound, capturing control points and defeating any warchiefs. Finally, you’ll head inside to face the Warlord in the throne room. Each of the three main forts is a unique challenge, and the final battles are a tough test of your combat prowess. They’re a fantastic climax, but again made us wish the ante was dialled down elsewhere.

Start a fight in any outpost or event and you’ll soon be swamped by orcs, ologs and more interfering captains than you can shake a graug at. One sequence saw us attempt to challenge a leader who was hanging around another captain. Leaping into battle we were ambushed by a tracker who’d been hunting me down. Standing up to face the new threat, the camera suddenly zoomed over to one of our warriors who’d turned up to inform of his betrayal. Every single fight is dialled up to 11, robbing the important battles of some of their gravitas.

That’s not to say the Nemesis system is a failing, however — it’s responsible for the most exciting moments the game has to offer. Our coolest sequence came at the end of a gruelling battle with a foe far beyond our level. After whittling his health down to a sliver, we were caught out by a heavy blow, downing us. With no chance to defend, it all looked over until another orc leapt out from the blue. Throwing a spiked chain into the opponent, scorpion-style, our bodyguard ripped the enemy captain’s head clean off, saving our life. Needless to say he was swiftly promoted to warlord. Events like these are superb and leave you clamouring to tell a friend about the unique scenarios you encounter.

Think outside the box

With the commotion around them, It’s hard to avoid discussing Shadow of War’s loot boxes. Their inclusion certainly feels out of place, but perhaps the most surprising thing is the lack of a reason to use them. The only chests I purchased were gained using credit granted in-game, and I didn’t even bother opening them all. There’s a huge number of upgrades to earn in the form of abilities, weapons and gem slots, but I never felt like I was being held back. Levels are littered with collectibles and side quests that’ll boost your XP and grant money or equipment. By the end of the main story I’d accrued so much of the game’s currency that I could have drowned Mordor in loot boxes, and I’d barely touched the game’s collectibles.

Past the core plot, the game enters a phase called the Shadow Wars, and it’s here that loot boxes find somewhat of a purpose. Essentially a series of wave survivals, Shadow Wars tasks you with defending your conquered forts against 20 sieges of increasing difficulty to earn the game’s “true” ending. It’s the only part to feel particularly grindy, but the game makes clear that you’ve completed the core game before you begin, with the Shadow Wars offering an extra burst of end game content, should you have the time.

Overall, Middle Earth: Shadow of War is an impressive advancement on Monolith’s first title, expanding the concept down almost every route imaginable. There’s so much to love about Shadow of War’s Nemesis system, and a great deal of effort has gone into improving interactions from the first game. The sheer variety in orc captains, their dialogue and the missions you meet them in continued to impress us for the full duration of the game’s story — no mean feat given its length. If you could only purchase one game in a year, Shadow of War wouldn’t be a bad call, as with all the game has to offer you could easily spend upward of 80 hours in Middle Earth.

It’s just a shame that too much time in one go only ends up feeling tiring. The unending waves of orcs never let up, and your efforts in cutting them down have little impact on the world until you move on the fortress. Shadow of War is, if you will, an exercise in gluttony. Spaced out into comfortable, short sessions, Mordor’s delicious servings will keep you entertained for a long, long time. Just don’t dive in too greedily or you might be left feeling sick.