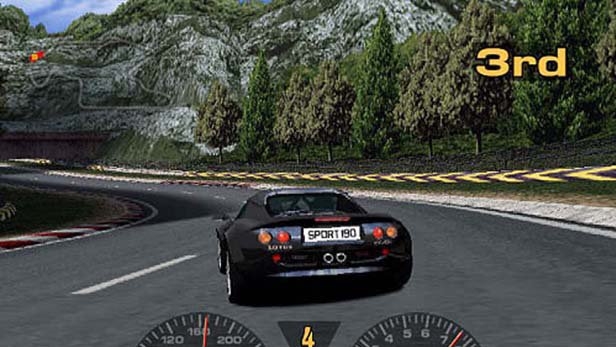 Sony’s Gran Turismo not only raised expectations of what videogames could technically do, it transformed our conception of what a mere console game can ultimately achieve. Under the guidance of producer Kazunori Yamauchi at Polyphony Digital, the flagship PlayStation motor racer has mirrored its creator’s own surprising journey that has successfully crossed the line between kids’ stuff and seriously rewarding, real-world endeavor. It is as important as it is unique under the hood, quietly plotting its own course regardless of the competition.

The toon beneath the hood

One of our favorite stories regarding the origins of Gran Turismo relates to how Yamauchi got involved in the first place. Among his earliest titles was the 1993 SNES game Skyblazer, on which he was director, a Strider-like hack-’n’-slash adventure that attracted good scores. But when the 1990s games journalists found themselves enjoying Motor Toon Grand Prix, again a fun-oriented game received very well, nobody had any idea where this was leading.

There were clues, however, in the follow up Motor Toon Gran Prix 2, that featured a new mode that simulated Formula 1 and NASCAR. Even the HUD resembles the kind of layout that would become familiar to Gran Turismo players after 1998. Apparently Yamauchi still harbors desires to revisit the Motor Toon Grand Prix series, but it has been a while (2010) since he mentioned anything specific. Motion control, PlayStation VR… we can only hope.

The sim that became a showcase

Console gamers were not that enamored by simulation in the ’90s, unless you enjoyed dating games such as Konami’s Tokimeki Memorial series. Sony wanted PlayStation to be perceived differently, appeal broader, opening the door for Yamauchi’s dream vocation.

Some staff members here at AllGamers clearly remember how Gran Turismo disrupted the gaming status quo, which until that point had accepted console racing to be Ridge Racer or Sega Rally and all kinds of clones. This is what we all apparently wanted, but Yamauchi saw what many of us really needed – greater depth leading to a richer sense of achievement.

The secret was transforming the understanding of physics involved into fun activities, and the genius was in presenting this as license challenges that players perceived as minigames. We had the lure of these incredible looking, fully licensed vehicles, locked behind the tasks required to prove our worthiness for ownership. Gran Turismo wasn’t a game about winning races, it was an introduction to the subtleties, focused very much on the driving sensation. Gran Turismo cared about engine torque, body roll and road contact with individual wheels.

The Real Driving Simulator was instantly compelling, evolved on the basis of this passion.

The showcase that opened doors

The series drilled down into such details as suspension and air intake systems, provided authentic audio and livery for 100s of real world super cars. Gran Turismo came under fire for not showing damage to these precious vehicles, but the trade-off was the opportunity to walk out of virtual showrooms with the most cherished cars in prototype and production.

The first sequel arrived rough around the edges, owing to time constraints, but by the time Yamauchi’s newly established Polyphony Digital studio had got to grips with PlayStation 2 hardware, players were drawn deeper into the mysteries of realistic handling. Gran Turismo 4, released in 2004, introduced downforce and forward/backward roll (a.k.a. pitching). The game shipped with a hefty driver’s manual, inviting players to perfect their art of racing.

A relationship with peripheral manufacturer Logitech was established in 2001, leading to the production of a fully featured, Gran Turismo branded driver’s cockpit. In 2008, serious rewards for dedicating time within an authentic physical set up was announced: The Nissan PlayStation GT Academy. Established by Nissan Europe, Sony Computer Entertainment Europe and Polyphony Digital, the GT Academy transitions competitors from the console experience to actual vehicles, resulting in real world tournament success for its graduates.

The dream that has endured

The Gran Turismo series has undoubtedly made some missteps over the years, particularly on PlayStation 3. With competition heating up since 2005 on Xbox with Forza Motorsport, the shaky online component of Gran Turismo 6 especially came under the microscope.

For a while, though GT Academy continues to prosper, the core experience appeared to falter. It has become expected that release dates will slip and finished products lack polish. Comparisons between Gran Turismo and Forza were inevitable, usually focused on graphical representation and sheer number of available cars. When Forza Motorsport 7 and Gran Turismo Sport launched head to head in October 2017, the gloves were well and truly off.

To those people who know what they were looking for, very little has changed of the original Gran Turismo ethos, though it has been turbo boosted somewhat. Fans might quibble the differences in handling between Gran Turismo and its closest rivals, but Gran Turismo is no longer about the console experience in isolation. The ‘Sport’ categorization has led to recognition by the FIA (Fédération Internationale de l'Automobile), resulting in the FIA Gran Turismo Online Championship, and a game heavily invested in its online PvP.

Yamauchi has been racing professionally since 2009, competing several times in the 24 Hours of Nürburgring. In 2015, Yamauchi’s contributions to the automotive industry were honored by his receipt of the Grand Prize of Creativity at the 30th International Automobile Festival in Paris. Yamauchi holds an honorary degree in vehicle engineering, earned in 2017.

This career legacy, and a desire to connect like-minded people with the same opportunities, is what Yamauchi’s journey with Gran Turismo has always been about. We can honestly say that we are hugely excited about what the next 20 years will bring. Cheers, Yamauchi-san!