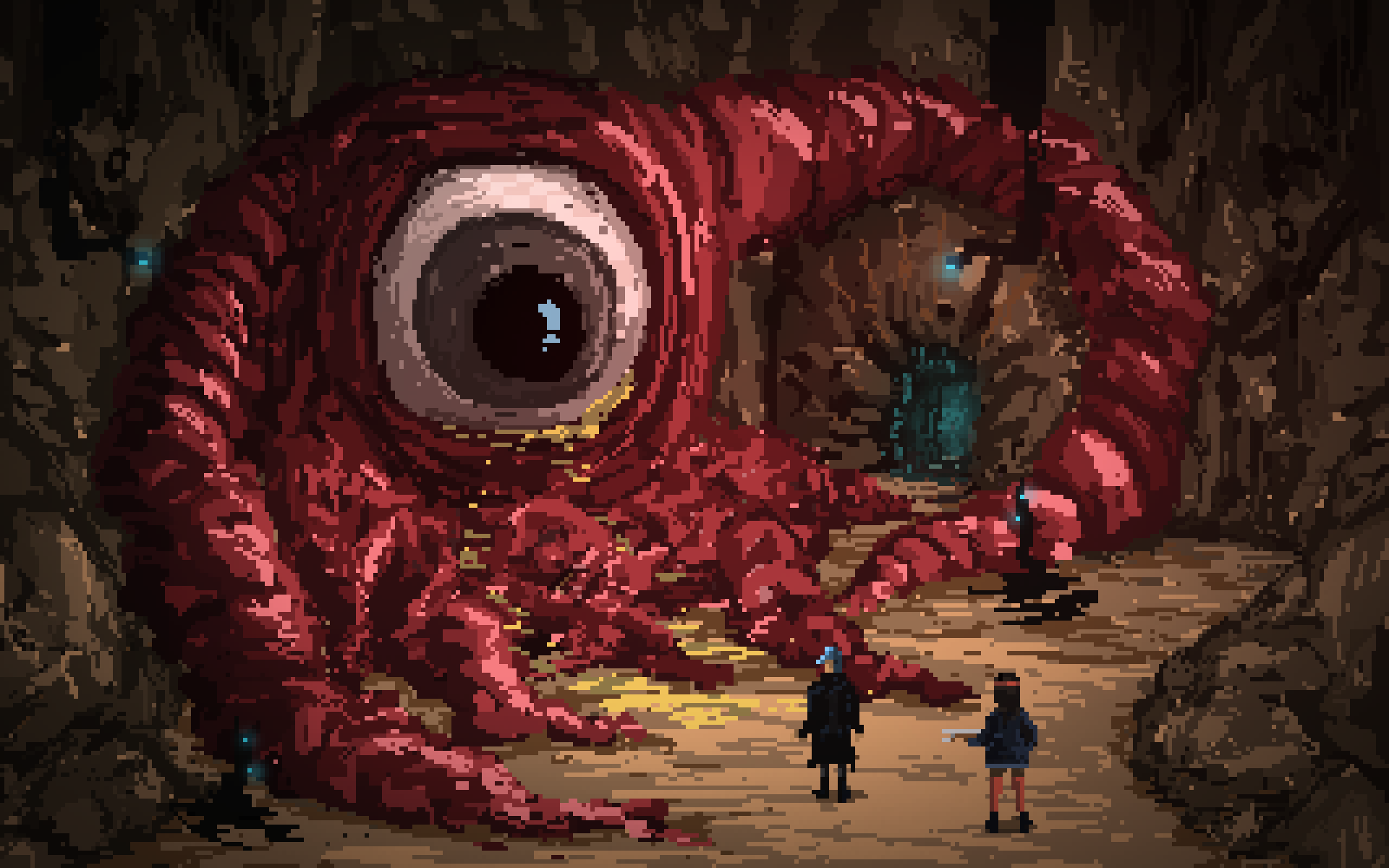 The Screenshot Saturday showcase - May 12

Every Saturday, studios and individuals the world over take to Twitter to share images and videos of their games in development as part of #ScreenshotSaturday. It’s a fantastic celebration of how widespread and varied game creation has become, not to mention a great way to keep an eye on upcoming gems or spot incredible artwork. Collected below are some of the coolest stills, gifs and videos from this weekend which we’ve gathered for your perusal pleasure. Would you rather face terrors from the past or look to a horrifying future? The choice is yours this week.

Today we ask our fans to simply, Caption this - #indiedev #animation #danceofdeath pic.twitter.com/gVMrH6HWvX

Du Lac & Fey: Dance of Death is a crime-solving point and click adventure set in the late 1800s at the time of infamous serial killer, Jack the Ripper. If that sounds like over-trodden ground, consider this: you’ll be solving crimes as the immortal knight Sir Lancelot and enchantress Morgana Le Fay, the latter of which just so happens to be trapped in the body of a dog.

This supernatural twist serves as more than narrative spice however, allowing the player to investigate crime-scenes through different eyes (and senses). Lancelot and Le Fay are also joined by Mary Kelly (believed to be the Ripper’s final victim), adding a new class ideology to the picture.

Despite the morbid subject, Du Lac & Fey promises witty writing, with Morgana and Lancelot more than happy to give the other a good ribbing when deserved. Developer Salix Games wants to explore the effect the Ripper’s killings had on the people of London at the time, as well as how the terrible crimes left such a lasting image in the city’s history.

Du Lac & Fey: Dance of Death is set for a late 2018 release, with more information available on Salix Games’ website.

Sometimes we miss the simpler days game development, when studios threw darts at a chart of animals, creating an entire platforming franchise around whatever they hit. Thankfully there are still indie devs out there proudly flying the banner of those animals who weren’t lucky enough to be chosen. Guinea Pig Parkour is one such example, and takes inspiration from the likes of Earthworm Jim, letting its rotund protagonist hop, flip and roll his way across colorful levels.

It’s early days yet for the title but we already love to almost gelatinous animations for the rooftop-running rodent. Guinea Pig Parkour is being developed by solo dev Jeff Mumm who’s clearly fond of his furry pals, also writing the Guinea Something Good comic.

How to teach the player about dangerous mines: Use NPCs.#screenshotsaturday #gamedev pic.twitter.com/u2LHNdmqSE

To truly immerse a player in your world, it’s important to make tutorials as natural as possible. When it comes to explosive traps that unfortunately means some poor NPC is going to suffer. That might seem cruel, but Death Trash’s world is about as mean as they come. Set in a punk-filled post apocalyptic world, Death Trash describes itself a vulgar, cyberpunk RPG.

In the vein of old school Fallout titles (yes, way back before Fallout 3 revamped the series), Death Trash offers all the hallmarks you’ll expect from the genre with involved dialogue, item crafting and skill trees to explore. The world itself looks to be the real treat however, that is if your idea of treats is grotesque cosmic horrors and twisted hybrids of flesh and machine. It’s all rendered in gorgeously grotesque pixel art. It may be horrid, but we can’t can’t help wanting to see more.

Death Trash’s release date is admirably listed as “when it’s done,” with current plans to release on PC before looking at further platforms. We might have to wait a while but the good news is that Developer Stephan Hövelbrinks is plans to include local co-op in the final release, letting you explore the wasteland with a pal. You can keep up to date with progress on the development blog or by joining the Discord channel.

Come and hang out if one of these is true:
You're a friend of the Fleshkraken.
You want to help out with feedback and ideas.
You're willing to test the game in the future. pic.twitter.com/jLijpr7tts

Atlas is a voxel roguelite in which you manipulate the blocky world to defeat your enemies. Bridges can be raised from the ground to access new areas and grenades send shockwaves of earth rocketing upwards (along with anything on top of it). The strength of your powers will improve as you solve puzzles, beat monsters and clear levels, letting you shake things up (quite literally) as you grow stronger.

It’s a cheery, vibrant and animated world, thanks in no small part to developer Borderline Games making every aspect feel responsive, even if they won’t quite let you smash up the town. No word of a release date that we could find, but the team posts regular updates via Twitter or on their blog. You can check out the studio’s previous work on their itch.io page.

We can finally announce the final name for our game :
Atlas : Groundbreaking Adventures

This trailer will be shown at MIA in Brussels next week, come say hi and try the game if you are around !#screenshotsaturday #magicavoxel #madewithunity #indiedev #gamedev pic.twitter.com/urJA3HDRXc

Created by ex-Ubisoft devs, Metaphora is a gorgeously realized game about a small star-like being named LUX bringing life to a world inflicted with a terrible virus. Dropping cuboid seeds, Lux can spread platlife across the procedurally generated world, reviving the dying planet of Metaphora. LUX is far from alone, too. At any time the player can switch control to MOONYCAT, the last of a vanished race of inhabitants. The two will need to cooperate to progress through forests and dilapidated ruins in their adventure.

The game looks nothing less than a joy to explore, so it’s no surprise to hear Metaphora has already won several awards from showings at previous events. You can keep up to date with development on the studio’s official site as well as Twitter and Facebook.