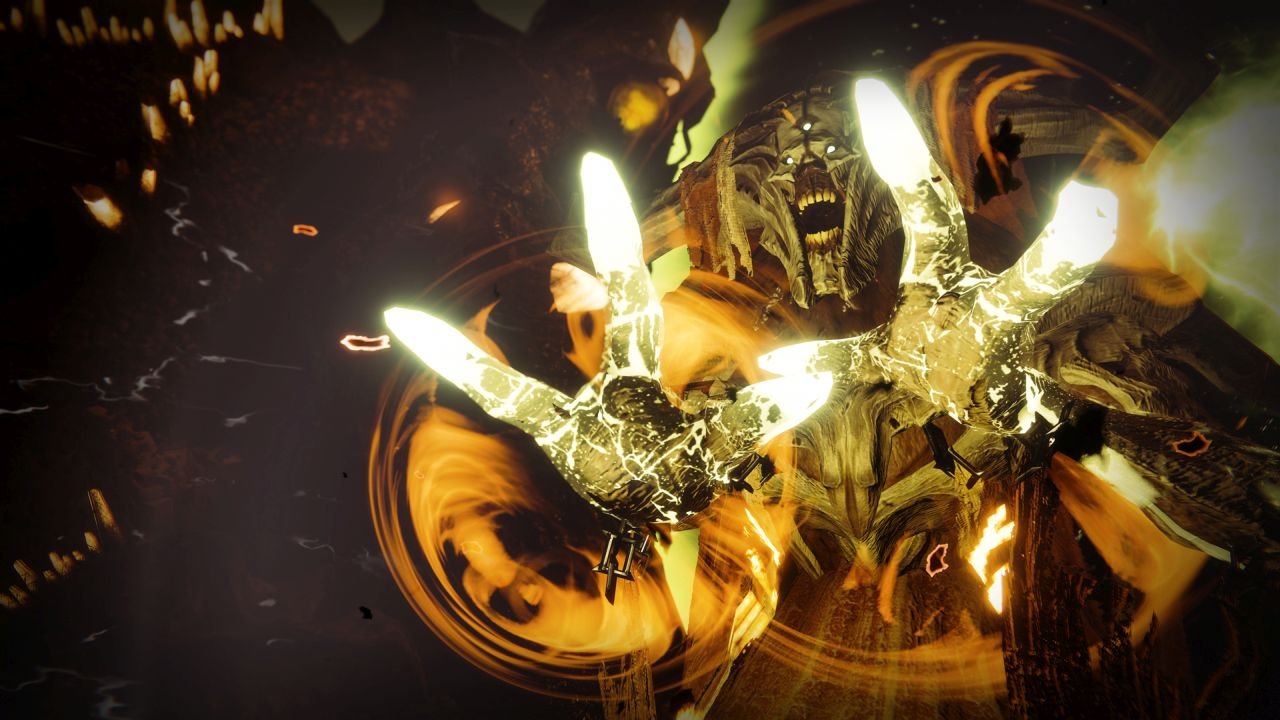 A new personality low on charisma leads an all-too familiar plot to face frozen versions of bad guys that players have been putting in the ground for almost four years. We’re back on Mars, but it may as well be the moon, or anyplace else that we’ve encountered the Hive in years gone by. There’s another seemingly endless shopping list of Things to Do, but already this is getting old. After one day in the company of Ana Bray, we’re scarily close to quitting.

Heroes in a hurry to leave

As short-lived as The Curse of Osiris was, sending huge waves of disappointment throughout the community, we do remember being bowled over by its presentation. We encountered a man of legend, the eponymous Osiris, and the mind-fuddle of the Infinite Forest was hard to forget. The Vex flavored missions combined the mystery of the ancient with dreamlike exotic. As brief as the campaign was, it was compelling from the start and ended in spectacular fashion.

We’d like to give credit to Curse of Osiris for adding another dimension to Destiny 2, since Mercury enabled our participation in the complex lore that many of us live to understand. Mars, meanwhile, with its Clovis Bray facility and secretive sentient AI, struggles from the beginning to rekindle any fire in our burned-out Guardians’ heart. Even Ana Bray doesn’t seem keen on hanging around any longer than she needs, swiftly taking up her post as another time-tax collector, rewarding armfuls of tokens with reasons to go fetch more.

New patrol space Hellas Basin immediately strikes as somewhere that you clumsily missed and maybe need to cross of the list. Its ice caps and caverns are devoid of the spooky charm their counterparts on Earth’s Cosmodrome had back in 2014. Though there are Guardians spotted trying to make the best of it, Mars feels eerily abandoned and empty.

We wouldn’t quite go so far as to say that Ana Bray is equally devoid of character, since her backstory linked to Twilight Gap should stir something within you. But as new arrivals go she’s played safe as could be. Her tale is almost like Bungie adding a full stop.

Upheaval in hopes of survival

Most Guardians will destroy the wormgod Xol with ease, and be making swift progress from Power Level 335 to 385 inside of three hours. The shallow sense of achievement evaporates fast, the truth hitting home that Destiny’s fundamental problems are not really addressed by ‘quality of life’ game-tuning such as the private matches and ranking system in Crucible. Those 100 extra slots we’ve received in the much maligned vault are hardly worth mentioning at all — it’s still a nightmare to manage. But hey, let’s wave a flag for the emote selector.

Having a badge of honor to show for PvP accomplishment may provide that extra layer of credibility that Crucible has been missing, but it’s not really enough. Our take on this right now is that if you lost interest for many reasons that the internet has already exhausted, it’s doubtful you’ll return to raise a profile within what is on the verge of becoming a meaningless arena.

On the subject of tweaks and changes to the exotic weapons, the disconnect between endgame endeavors and ease of attainability with exotics remains a gaping chasm that’s yet to be bridged. To appease some sectors of the community, Bungie deigned to start handing out exotics like candy. They may well do clever things, but they’re no longer elusive, so the desire for ownership has long since passed. This remains a fundamental issue for the game.

One component of Expansion Pack II gives us hope. A new public event on Mars, Escalation Protocol is kind of a stripped-bare variation on the Court of Oryx from Destiny: The Taken King, or Rise of Iron Archon’s Forge. It’s a relentless, Halo firefight/Gears of War horde-like skirmish that players can activate at any time, with a recommended Power Level of 370.

It’s not Prison of Elders’ Skolas levels of stress-sweats and soul-withering rage, but there are echoes of old school Bungie here that we like. The sense of Guardian camaraderie that Destiny once instilled is reawakened, pulling together to strive for rewards out of reach for most players this soon after DLC launch.

The two new strikes are sadly reworked campaign missions, but Strange Terrain is worth commending, owing to raid-lite mechanics reminiscent of the inventiveness found in The Taken King. Its boss, Herald of Xol, is one of the finer examples of Destiny creature design.

We’d more or less written off Curse of Osiris by this early stage too, but the raid lair Eater of Worlds brought tremendous value to the overall package; it was something of a miracle almost out of the blue. We dare hope that Spire of Stars will shine just as brightly after going live this weekend. Even so, this isn’t Destiny 2 out of the woods by any margin.

The milestone that became a millstone

Around this time in 2015, House of Wolves set out to prove that Destiny DLC could be taken seriously. But in the light of Curse of Osiris and Warmind, it’s pretty hilarious to think that we were disappointed in The Dark Below with Crota’s End and two standalone strikes featuring the blood-curdling screams of Omnigul. That same year The Taken King was the shot in the arm that Destiny needed. By comparison Destiny 2 requires major surgery.

Bungie’s Destiny project, stalling on its 10 year trajectory, remains extremely valuable to us. It’s an ever evolving landmark in entertainment, from which an entire industry is still learning. We would invite any gamer to take part in the experience, and we’re still sticking with it out of genuine and due respect. All that being said, Warmind is sadly a waste of space magic.