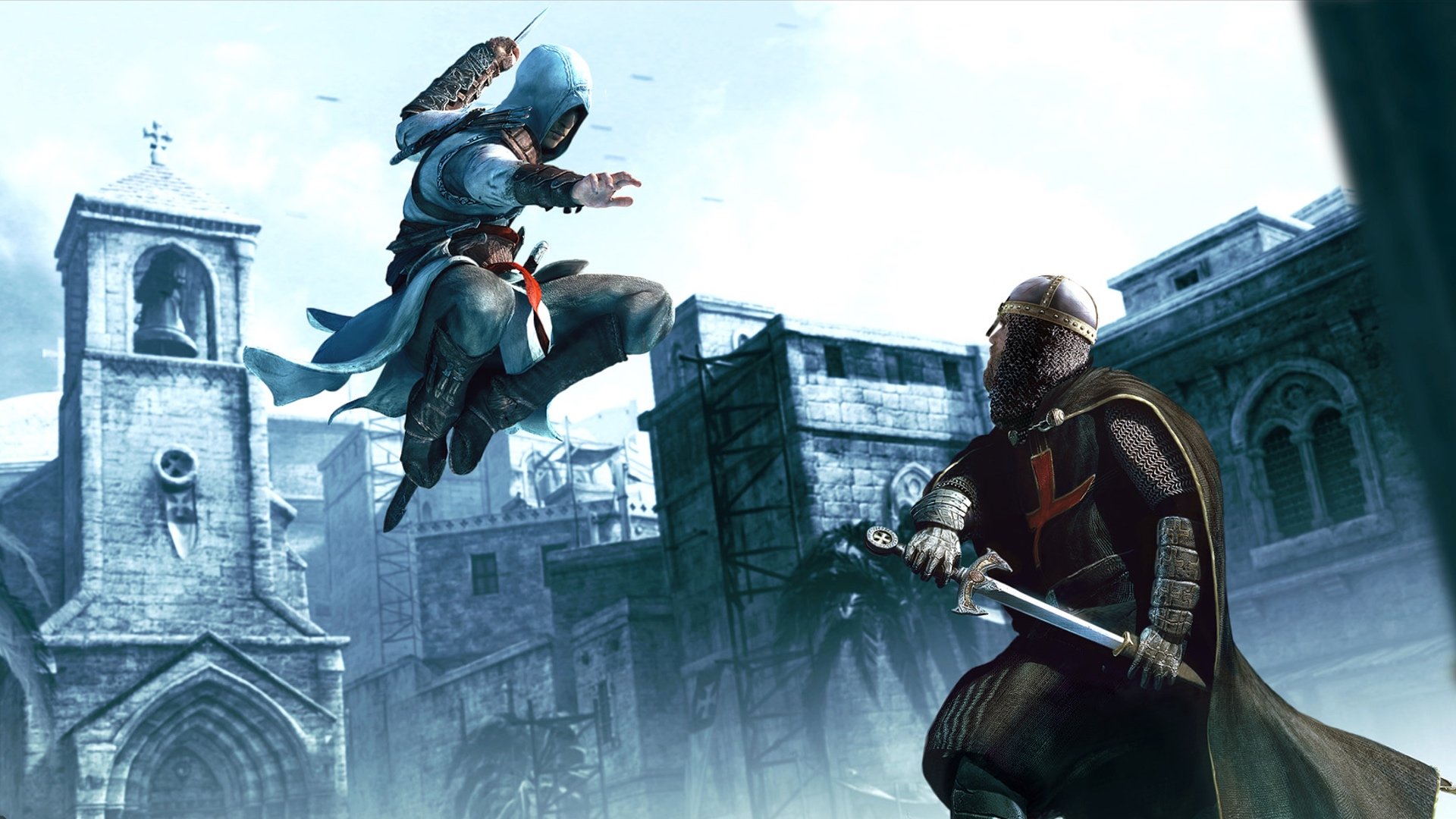 Is Assassin's Creed 1 any good today?

Most of them time when we're writing retrospectives, we find ourselves horrified by the mounting age of the games we grew up playing, but looking back on the original Assassin's Creed provokes the opposite reaction. This series is only 10 years old? We feel like we've been playing it forever. Perhaps equally surprising is that the original Assassin's Creed is still really good fun to play. If anything, we like it more today than we did back in 2007.

There are all sorts of reasons for that, but obviously nostalgia is a big part. Waking up in Abstergo's comfy prison as Desmond Miles for the first time, climbing into the Animus under duress and shaking genetic hands with Altair, beginning our adventures in the Middle East by taking in gorgeous skylines like the rooftops of Damascus, and performing sacred acts like climbing viewpoint towers, diving into haystacks, and plunging the hidden blade into someone's neck. These were all things this game invented, and after an insanely convoluted succession of sequels that grew so dense with 2015's Syndicate that even Ubisoft needed a year off to recover, there's something almost romantic about revisiting them.

Al Mualim's will be done

The original Assassin's Creed was a much simpler game than its successors. Having disgraced yourself in the eyes of the Assassin order and been mock-executed by its leader Al Mualim, you are sent out on a humbling (and murderous) journey of rediscovery, tasked with assassinating nine different Templar kingpins to regain your master's favor and learn the tenets of the order anew. To do this, you must first travel to each target's general location, spread across the Middle East, then gather intelligence on them by eavesdropping on conversations, pickpocketing couriers and meeting informants.

Once you've gained enough insight into their location and routine, you're sent to kill them, and some of these takedowns have fantastic potential. The one that always sticks in the memory for us is a castle backing onto the ocean, which must be penetrated by careful mountaineering across its exterior, using battlements and every ounce of stealth available to remain undetected until you can make it to within striking distance of your foe. Eliminating him with an aerial takedown, without being identified beforehand, is amazing.

Of course, one of the reasons Assassin's Creed received mixed reviews at the time - and it's easy to forget that it was a much bigger commercial success than it was critically, at least to begin with - is that the centerpiece assassinations rarely played out that way. Most of the time it was impossible to make it all the way to the target without being discovered, and once alerted, the whole thing descended into farce.

Suddenly you would be thrust into combat mode, where Altair stands with sword and blade drawn, surrounded by enemies, who cautiously approach him one by one to be parried and executed. Eventually the assassination target steps forward for this treatment, and the game then goes into a cutscene conversation between you and your dying victim, even if there are still numerous henchmen standing in the immediate vicinity.

That wasn't the only thing critics complained about, either. While the cities themselves were gorgeous and painstakingly assembled, once you scratched the surface there wasn't much variety. Stalking your targets involved performing the exact same information-gathering tasks again and again in new locations, while the numerous people occupying the world offered little utility and were guilty of saying the same things wherever you went. Curiously, Ubisoft often had them say the same lines in different accents depending on where you were. We can only assume development pressures prevented them writing and recording different dialogue, but it still feels like a strange limitation.

It's easier to forgive these things in hindsight, however, especially with nostalgia in the mix. Hearing "You dirty thief, I'll have your hand for that!" in a series of different accents and inflections feels charming these days, rather than weirdly cheap and immersion-breaking, as it did when Assassin's Creed was being hyped to death as the next big open-world extravaganza. And the crude parry-and-kill combat, repetitive information-gathering and easy-to-spoil core assassinations don't feel so bad.

Perhaps that's because the other parts of the game have aged so well. The cities, in particular, remain astonishingly beautiful. Staring across the rooftops of Damascus for the first time would still be a powerful moment if it were part of a new game released today, because the architecture and lighting is immaculately observed, making the absolute most of the PlayStation 3 and Xbox 360 era hardware that it was built to run on. It's a sea of rooftop shacks, rudimentary cranes, minarets, domes and tiny windows that helps transport you back to the 12th century with great conviction.

Diving in amongst those rooftops and towers is what made the game so immediately special, of course, because its great revelation - certainly its greatest legacy, since it's been copied so comprehensively by numerous developers since - is the free-climbing and free-running that allowed you to navigate all sorts of terrain through a simple control system. Climbing the wall of a building, watching Altair's hands and feets find purchase where no other game ever seemed to offer it, was a watershed moment for open worlds.

The story, too, has an elegance and intelligence that stands the test of time. We know the Assassin's Creed series is about the eternal battle between the Templars, who want to control humanity, and the Assassins, who want to grant people freedom, but the way their motives are contrasted remains interesting.

The Templars believe peace and happiness is achieved through benevolent subjugation, while Assassins believe freedom is about taking responsibility in a fragile world and that our species can be trusted to do this. Later installments had a lot more fun exploring this, with sidekicks and comic relief galore - as well as, let's be honest, a lot of supernatural mumbo-jumbo - but Assassin's Creed plays it pretty straight and its thoughtful script keeps the mystery interesting. Will Altair's growing enlightenment provide the answers? Will they be the right ones, or just the ones he's indoctrinated to believe?

Whatever happens with Assassin's Creed Origins - and Egypt seems like the perfect setting for a series reboot - we certainly appreciate the excuse it's given us to revisit the first Assassin's Creed. We finished this twice when it first came out - at least partly for gamerpoints - and remember thinking it was a bit of a mess, despite fine moments. Playing it again now, it feels ahead of its time, despite a few rough edges and shortcuts. It certainly feels worthy of the empire it became, and we hope Origins does its memory justice.