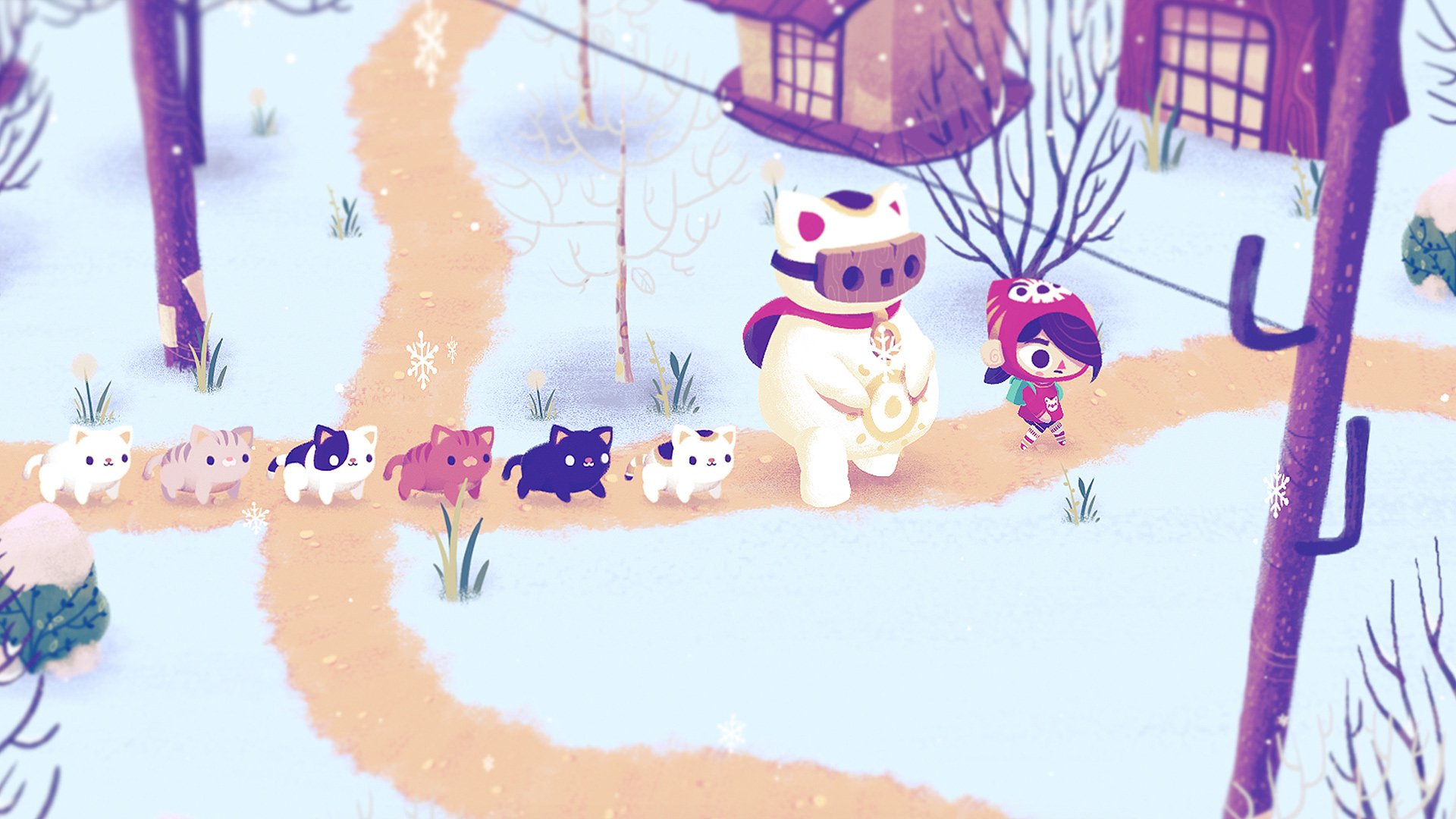 We’re a tad late to this week’s showcase but fortunately the games on offer are better than ever before. We’ve got adorable uppercuts, feline farming and lonely landscapes for you to enjoy below.

For #screenshotsaturday, I present performance art entitled: "no you WILL explode in that fire trap get in there dangit"

Most weeks on the showcase we get a tantalizing glimpse at games far from release, leaving us brimming with excitement but frustratingly empty handed. Not so this time thanks to the imminent release of first-person arena roguelike, Spartan Fist.

Punching dudes so hard that they explode might not seem the perfect match for a cutesy aesthetic, but Spartan Fist more than makes it work. With delightfully fluid motion, this roguelike brawler somehow maintains a cheery demeanor even while passing trains — standard for any serious gladiator bout — are churning misplaced combatants into a cuboid red mist.

Spartan Fist releases next week on May 15 so we don’t have long to wait before jumping into its proving grounds. Check out the Steam store page for more details and warm up those punches with the trailer below.

We’ve seen a bunch of great indies inspired by the success of simple-life games like Stardew Valley or Animal Crossing: Pocket Camp, but few distinguish themselves so charmingly as Mineko’s Night Market. Set on a small, Japanese-inspired island, the theme for the game is cats, cats and more cats. Mineko’s night market fills its towns and trains with adorable little kitties to pet, letting you take part in cat plays, cat races and yes, even cat farming.

Developer Meowza game promises a narrative approach, with crafting, bartering and a variety of Night Market games to enjoy as you explore the island and uncover the mystery of the Sun-Cat Abe. Set for release this year, the Steam trailer’s music is so catchy we couldn’t help but watch it three times in a row. Mineko’s Night Market is currently planned for release on PC and Mac, but the game’s site says that the studio is looking to release on additional platforms in the future.

Interior view of the Okomotive from @FARtheGame
It also has an evil side! (that you don't see in game)#Screenshotsaturday #indiedev #conceptart #3dmodeling #gamedev pic.twitter.com/QGPhIuyPy7

Alone aboard a steam-powered airship, Far: Lone Sails takes you on a journey across a derelict ocean of sand. As the sole crew member, you’ll need to scamper around the innards of the vessel, adjusting your sails and balancing the engine’s pressure. Abandoned outposts littered across the muted, gray plain provide fuel to power your vessel, as well as the chance to uncover some history to this collapsed world.

Hauntingly beautiful, it’s no surprise that FAR: Lone Sails has already drawn plenty of attention, winning multiple accolades for their showings at IGF, Gamescom and more. The good news? It’s out next week, May 17 on Steam and the Humble Store. Developer Okomotive also lists PlayStation 4 and Xbox One releases on the game’s site, though there’s no release date set for those yet.

Our Steam Wishlist page is up just in time for #screenshotsaturday ! Add Beacon to your wishlist if you want to be the first to get it when it squeezes through those Steam tubes later this year. https://t.co/z8a5Tk1msE pic.twitter.com/V3RT0d7YCV

Thought we were done with this week’s run of visually stunning games? Think again. Beacon is a scifi roguelite that sees you exploring a hostile alien planet after a deadly crash landing. With your clone bay up and running you’ve got as much chances as you like to adventure out — a fact you’ll be thankful for considering the local fauna. Each death lets you advance your character further, incorporating the DNA of slain enemies to modify and upgrade your own capabilities.

Beacon is arriving on Steam and Xbox One later this year, but is currently available in First Access development on itch.io if you want to jump in at an early stage. The game currently has four randomly generated levels available, taking you through the planet’s forest, swamp, pollution and Prism Vault.

I've made a game about grappling hooks and puzzles this week!
You can play it for free, in-browser on my itchio page: https://t.co/wJdqI9LmuQ#screenshotsaturday #games #demo #unity #free pic.twitter.com/8RBTdDMO95

If there’s one universally true rule in video games, it’s that grappling hooks are always cool. We’re rounding off this week with an excellent little puzzler by indie developer Bruno Koch. Using your mouth organ to impressive effect, Tongue Action has you gleefully swinging through levels, hoisting yourself over walls, and building paths mid flight by tossing out sticky pads, all to the tune of Toto’s Africa. It’s free to try on Bruno’s itch.io page right now so what are you waiting for? Just try not to die otherwise the music stops. Actually, since that’s all but guaranteed to happen while you’re swooping about, we’ve already grabbed a YouTube link for a the song to see you through. Catch you next week!