But let's be honest, we knew that already. 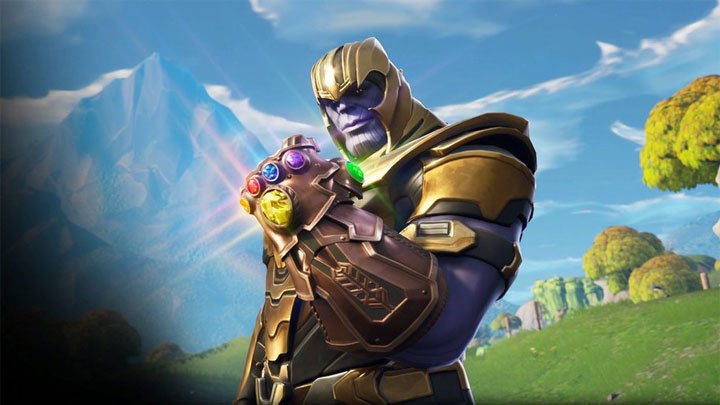 Guide: How to play as Thanos in Fortnite

Marvel supervillain Thanos has arrived in Fortnite's Battle Royale, and of course you want to play as him. Trouble is, so does everyone else. So how do you get your hands on that Infinity Gauntlet first, and what happens when you do?

How to find the Infinity Gauntlet in Fortnite

When playing in the game's new Infinity Gauntlet mode, the trick is to be the first to reach that fabled metal mitten. At the start of the match it will fall in a meteor somewhere in the map's safe zone. Your best bet of reaching it first is to parachute in, watch out for a meteor and then dive after it and hope nobody else is nearby when it hits.

Once you grab the Gauntlet you'll transform into Thanos. The Mad Titan has shields and a health bar, but while his shields recharge every time he deals damage, his health will never refill. He also can't build, use weapons or launch pads. That's a small nod towards balancing this insanely over-powered character.

What are Thanos' abilities in Fortnite?

In terms of strengths, he takes no fall damage and comes with a quartet of abilities that make him a fearsome foe. His punch can demolish players and scenery alike. He also has a super jump allowing him to leap over buildings, a slam attack that causes devastation around his landing spot, and a power beam that causes damage over time.

He's definitely more deadly up close, so if you are playing as Thanos expect other players to try and keep you at range with long distance weapons. You'll want to close the gap fast, at which point your brutal melee attacks make the encounter very one-sided. Don't be surprised to see players teaming up to bring you down. Your shield is your lifeline, obviously, and you'll need strategy as well as sheer force to keep it topped up with regular kills without letting it get so low that you start to lose your most precious resource: that finite health bar.

How to defeat Thanos in Fortnite

If someone else gets the Gauntlet, you'll know where they are as a Thanos icon will appear on the compass at the top of the screen. Defeating Thanos is hard but not impossible, and should he run out of health the player in question is out of the game and the Gauntlet falls to the ground to be snatched by anyone else. If nobody grabs it in time, it will despawn and another meteor will drop a new Gauntlet at a random location.

Keep an eye on Thanos' status, and when his health starts to get low you need to choose your moment to either strike the killing blow - or let someone else do it and quickly zoom in to grab the Gauntlet.

It's probably a good thing that this is a time-limited event, as Thanos is so ridiculously over-powered that he completely overturns Fortnite's balancing. It's not a mode you'd want to play for months on end, but as a bombastic novelty it's an absolute blast.