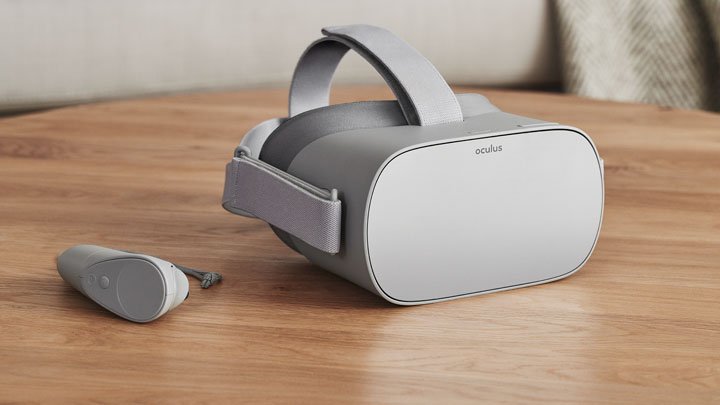 Virtual reality is still only a few years old as a consumer product, but already there's a bewildering array of devices to choose from. From the free giveaway cardboard headsets pioneered by Google, to the ultra high end set-ups like Vive Pro, it's a market with a lot of choices but not very much penetration as a mainstream entertainment option.

That's largely because every option up until now requires additional hardware to work: a powerful PC, a PlayStation 4 console, or a specific brand of smartphone designed to work with a specific slot-in headset. Oculus Go is the first major VR product to dispense with all of that. At $199 (or $249 if you want to double the internal storage from 32Gb to 64Gb) everything you need is in the box. Switch in on, put it on, and you're in VR. You're not tethered to anything else by a cable, you don't need to put anything else in for it to work - it's a standalone product that even your grandparents can understand.

So what do you get for your money? The packaging is compact and stylish. The box is no bigger than the sort you'd get for a small store-bought birthday cake, and sliding the lid off reveals the Oculus Go, presented with the sort of flair you'd normally expect from Apple. The small palm-sized controller is in there, while a few extra bits - the USB charging cable, a wriststrap, a soft spacer for those who need extra room inside the headset for eyeglasses - are discreetly tucked away in a small packet.

The headset itself is incredibly light - just 1.5kg, and the balancing means that it never feels heavy on your face, even after a long session. The straps are soft and easy to adjust, and the top strap can be removed entirely - a real boon for anyone with a lot of hair. Small speakers are hidden away near the straps and do a surprisingly good job of emulating "in-ear" sound, although headphones (not included) are naturally even better.

While it's been well designed for function, the aesthetic of the Oculus Go leaves a bit to be desired. It's a very bland looking device, cast in drab gray plastic that makes it look more toy-like than it is. The proportions and styling give the impression that it's perhaps a nude prototype for the Google Daydream. Put it this way - while the packaging apes Apple, the product design couldn't be further away. It's not a device that will wow people on sight.

The controller is powered by a single AA battery, and is comfortable and intuitive to hold. It's basically a slightly redesigned version of the Gear VR controller, and seeing the industry moving towards an input standard bodes well. A sturdy trackpad on the top lets you swipe and click through menus, while basic accelerometers allow it to mimic your movements very well in VR. A trigger is used to select and perform actions, a raised "Back" button is used to get out of menus, and an indented Oculus button takes you back to the home screen - and also recenters your view when held down.

It's simple, and that can't help but limit the options available to gamers. You won't be playing Skyrim VR or any comparable AAA titles on this hardware. Running on the same core systems as Gear VR, you're looking at the top end of the mobile VR gaming scene. While the headset and controller track tilts and turns, they can't track you in 3D space as the standalone nature of the Go means there's no external camera to track you. That means leaning in towards objects, peering around things, or grabbing and holding objects up to your face are not an option. As a result, most of the games tend towards flight games, horror mazes and racing. Most are really good fun, and very effective within their limitations, but for experienced gamers it won't be a particularly exciting selection.

At least whatever you play will look good. The Go actually has a slightly higher resolution screen than the hardcore Oculus set-up for PC, and the granular "screen door" effect that was so noticeable in early VR sets has completely gone. There's some distortion of the image if you strain your eyes to look to the edges of your field of vision rather than moving your head, but otherwise the visual fidelity is superb.

This is especially good for entertainment, and its notable that both Oculus' own movie download service and Netflix are among the first apps placed in front of you when you visit the store. There's some need to unify experiences across these different ways of viewing, but all offer virtual screening rooms, many with social options so that you can hook up with friends in a shared space to watch movies and TV shows together. The Oculus Rooms app also lets you play VR party games, such as Boggle, and a specific Oculus Events app will let you "attend" concerts and sports from the comfort of the couch.

It's here that you can see Oculus owner Facebook most strongly trying to steer the direction of VR away from solo experiences to more communal sharing, as that's where its core business lies. Facebook sharing is built-in to the Go's home menu, of course, so you can take screenshots or videos and share them without leaving VR. You can also use Facebook Messenger to place calls to people on your friends list.

You can also add your own content, by plugging the Go's USB cable into your PC, at which point you can access the folders just as you would on a memory stick. Photos, music and films can be loaded on, or taken off, and you can also manage your storage space - one of the few essential bits of info the device doesn't display in VR. It will warn you when space is running low, at least.

If the Oculus Go has a weakness, it's battery life. The specs suggest that a full charge should last from 90 minutes to around two and a half hours, depending on what sort of apps you're using. That certainly tallies with our experience. Spend too long browsing the menus and you can actually see the battery percentage tick down in the right hand side. It's unlikely you'd want to be immersed in VR for much longer than this, so it's not a fatal flaw, but it does mean that if you were planning to use the Go to watch movies - say, on a long flight - you're going to be limited to how much you'll be able to view in one sitting without recharging. That process, incidentally, takes around three hours to reach 100% from completely drained. It's also not recommended to use the headset while it charges. Ours got very hot when we tried this.

Is Oculus Go the answer to your VR gaming prayers? That depends on what you're looking for. Being cable-free and completely self-contained gives it the convenience of a handheld console, and while it won't trouble the luxury end of the VR gaming market you may still be surprised at just how good the games can look. As an entertainment device, the Go is an even stronger prospect, and for the first time this feels like something people might use in place of an iPad for movies on the go, or to hook up with friends remotely. The Go is definitely intended to be an entry point to VR for newcomers, with the built-in store offering curated bundles of apps based around certain types of content or theme. Most cost less than a mid-price budget console game, so you can get a lot for your money and sample everything VR has to offer quite quickly.

At just under $200, the Oculus Go gets a lot right and is priced at a point where the curious can give VR a try without any additional purchases, or it could be given as a gift without blowing your bank account wide open. There are still plenty of areas where improvements can - and no doubt will - be made, particularly as regards battery life, but the dream of widespread consumer VR makes a lot more sense once you've tried the Go. Now it's up to Facebook to make ordinary consumers aware of it, and sell them on the things that set it apart from all the other VR headsets on the market.

Oculus Go is available now from the official website.