Where to find all the dragons and how to free them from captivity in God of War. 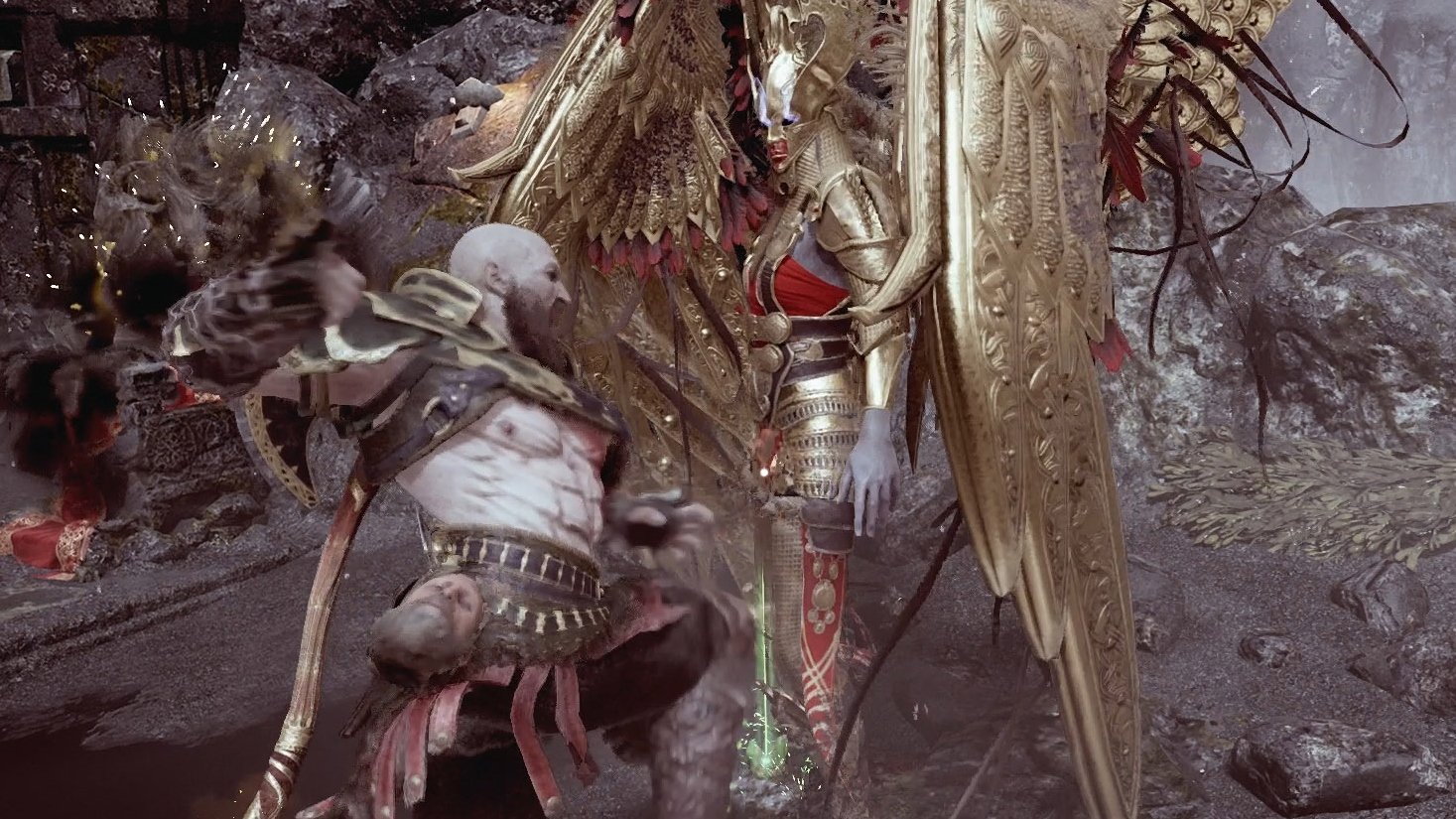 Raising money (and your voice) to support children across the world.

Step forward brave warriors, for Valkyrie Queen Sigrun is the toughest boss you’ll have to face in God of War. Expect Kratos and Atreus to be pushed to the limit, as this fight tests everything you’ve learned from the Valkyrie encounters you’ve faced up to this point. Beating Sigrun is no mean feat and should not be attempted with anything less than the best gear the game has to offer. Of course, the skilled and confident God of War player may feel like tackling her earlier, to which we say: good luck.

(There are always more bosses to beat. If you haven’t already fought Magnus and Modi, check out our boss guide!)

How to defeat the Valkyrie Queen Sigrun

As the Queen of her kind, Sigrun has access to almost every single ability you’ve encountered in Valkyrie fights so far, making it crucial that you remember the previous eight battles. Put simply, if you’ve not been paying attention up to this point, Sigrun will be throwing out a huge number of unfamiliar moves.

The battle against Valkyrie Queen Sigrun can be started at the Council of Elders once you’ve beaten all of the lesser Valkyries and placed their helms there. Touch the Realm Tear in the center of the arena and Sigrun will grab you, beginning the fight. Before you do that though, you’ll want to make sure you’re equipped properly.

To take on the Valkyrie Queen you’ll want to be as prepared as possible, and this means having the best gear available. The Ivaldi armor is your best bet here, and can be upgraded by unlocking Muspelheim and Niflheim. On top of this you’ll want a full suite of Epic Enchantments and — if you’ve got it — and Epic Talisman. You should be at least level 8 before starting the battle, or even level 9 if you’ve spent some time grinding for upgrade materials. Here’s our preferred loadout:

With the Shattered Gauntlet of Ages and your Ivaldi armor fully upgraded you’ll be able to equip up to 12 enchantments. Make sure these are high-level — at least level 6 but ideally level 7. If you have some lower level enchantments that make sense for the fight or your personal style, don’t be afraid to swap these in instead. For example, enchantments like Tyr’s Shard or Ivaldi’s Corrupted Mind might have more use than a higher-level poison resist enchantment. The general gist is to enhance Kratos as much as possible without lowering your level.

When it comes to runic attacks, we’ve focussed on damage and stun potential. The latter is crucial as it gives Kratos a small reprieve to grab health gems or reposition. Hel’s Touch will immediately interrupt Sigrun’s attacks, and The River of Knives pushes her away, earning you some breathing room. For pure damage we’ve also thrown in Rampage of the Furies and Hyperion Slam, though you can always swap these out for your preferred moves.

While it’s tempting to equip Kratos with a talisman that grants additional health, the cost of a level drop simply isn’t worth it. Instead, the Shattered Gauntlet of Ages in this build provides a hefty boost in damage and is one of the only talismans to offer three enchantment slots.

Atreus may not be controllable directly, but his armor and runic summon are still tremendously important. The Legendary Runic Vestment allows Atreus to find health gems on the ground for Kratos, an occurrence that’ll often prove life-saving. Wrath of Wolves doesn’t match the damage of other runic summons like Murder of Crows, but it provides another method to stun Sigrun, letting you land some heavy hits without any fear of repercussion.

(Psst! Are you a completionist? Here’s how to find all the Realm Tears in God of War. Not enough? We’ve got guides for the Eye of Odin ravens and Niflheim Ciphers too! )

As we stated earlier, the Valkyrie Queen will make use of every Valkyrie ability you’ve encountered so far, making for a lengthy list of attacks to remember. If you’ve got a good memory several should be immediately recognizable, but expect to be surprised by at least a couple of moves you’ve forgotten.

The individual attacks aren’t too tough to deal with, but Sigrun will quickly begin stringing attacks together in a manner that’s difficult to predict, throwing off your timing. We’ve got the full list of the Valkyrie Queen’s attacks below, but don’t recommend trying to memorize them all. You’ll want to be able to distinguish them in game, but the key moves to learn are unblockable attacks that you’ll need to dodge and the moves that give you a chance to return some damage.

Wing Projectiles – Slashes her wings, sending out four spikes in a two-hit move

Winged 2-Hit – Slash attack with her right then left wing, sometimes following up with a third unblockable hit with the right wing or an overhead slam with the scythe

Ice Blast – Fires out smaller chunks of ice followed by one large, unblockable chunk of ice

Light Rings – Fires four homing rings of light, followed by an unblockable larger ring. Sigrun will sometimes fire the large ring on its own

Wing Shield – Wraps herself inside her wings before throwing them open

Scythe – A parryable 2-hit scythe attack. The attack begins by flying straight at Kratos and starting a spinning attack when close

Barrel Roll – The easiest attack to exploit. Sigrun flies into the air and spins around before diving towards Kratos to try and grab him. She’ll repeat this 2-3 times and it cannot be blocked

Light Slam – Sigrun flies into the air, raises her scythe and prepares to slam it into the ground. Deals immense damage to you anywhere in the arena

Light Attack – Brings out a light post and smashes it into the ground, blinding you if hit. This is followed up with a scythe swing

Valhalla – Sigrun jumps straight into the air and slams down on Kratos, kicking him in the head and neck

There’s a lot to take in for this fight, and it’s simple practice that’ll see you come out on top. Get used to recognizing each move’s telegraphing animations. Sigrun’s stance, spin or shout will let you know what attack she’ll be using next. The most important attacks to dodge are Valhalla and Light Slam as these will deal a huge chunk of damage. Light Slam is particularly nefarious as it’ll hit you anywhere in the arena.

To stop this, be prepared to throw the Leviathan Axe any time you see her jump into the air. This will nearly always knock her down and leave her stunned. Use this time to lay in some damage or heal if necessary. Follow the axe throw by running up to her and using L2 +R2 to summon the axe back and slam it into her for massive damage.

Your runic attacks are the most reliable moves here, giving you a chance to leap in with the Leviathan Axe whenever she’s stunned. You can use the Blades of Chaos when available too, but they won’t deal as much damage.

Atreus has a key role to play here as well. Get him to use Shock or Light Arrows and try to time the attacks to fill up the status effect. This will stun her or leave her more susceptible to your attacks. If using Light Arrows, your runic attacks will deal even more damage when the status has built up fully.

Once again, don’t forget to make use of Spartan Rage. It’s easy to forget about this ability in the heat of battle, but while active each hit will give you back a small portion of health. You’ll lose a part of it each time you take damage, however. It’s best activated when you’re low on health as it’ll help you recover without the need for a health gem.

Last of all, it’s well worth buying a resurrection stone before you get stuck in to give you a second chance if things go sour. Save just before the fight and you’ll get the stone back even if you die after using it.

Apart from an overwhelming sense of relief and accomplishment, defeating Valkyrie Queen Sigrun will also net you a bunch of nice loot. You’ll get her helmet, three Epic items and a Legendary resource, as listed below:

Arguably the hardest boss fight God of War has to offer, Sigrun the Valkyrie Queen is unquestionably a serious challenge. If you’re really struggling, don’t forget that you can also turn down the difficulty to improve your chances.

While you’re here why not check out one of our other God of War guides? Here’s where to find every Jotnar Shrine in God of War.