The long-awaited sequel is almost here. 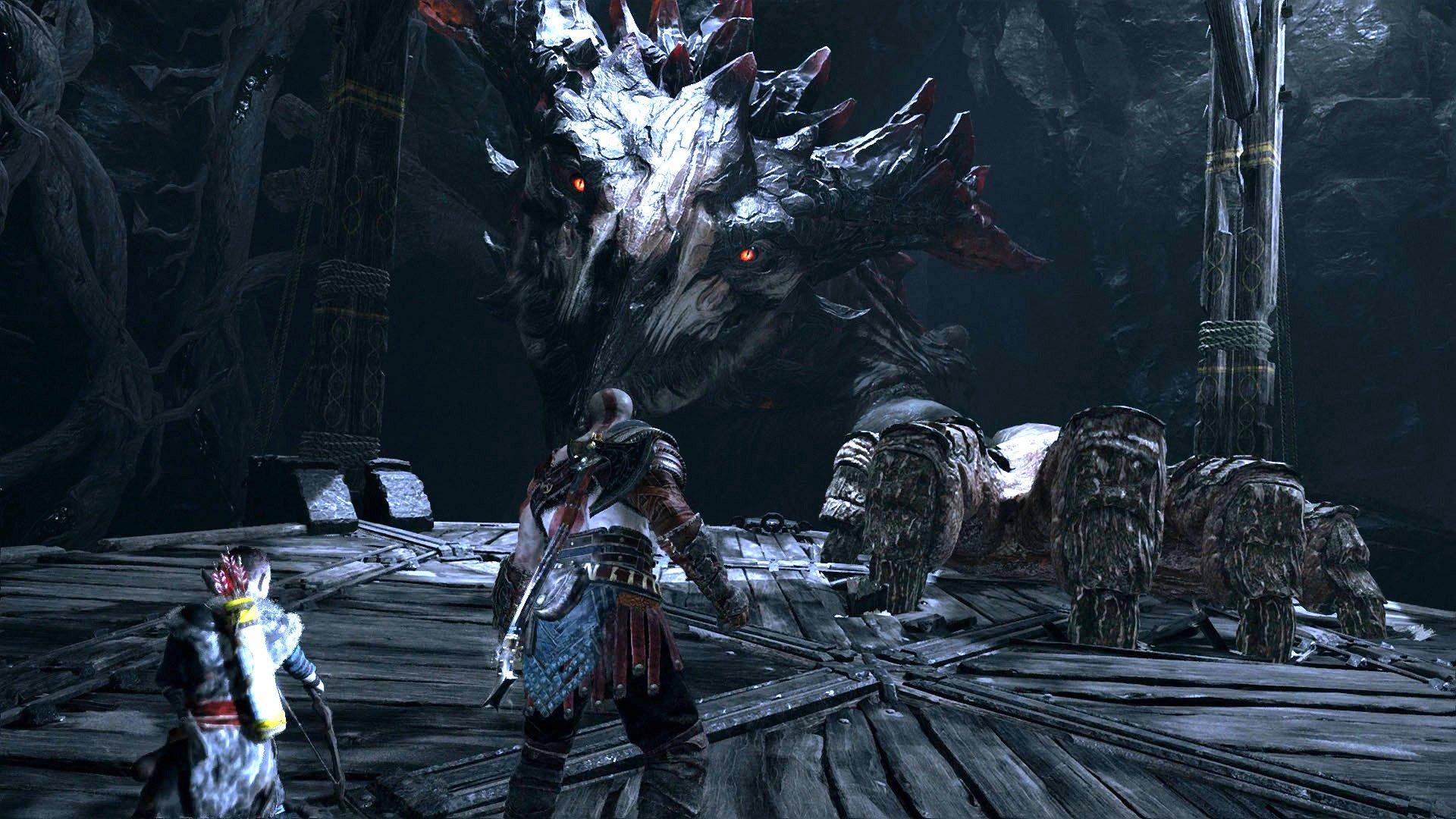 Clip the Valkyrie Queen's wings in our God of War boss guide.

You can't have a mythical fantasy game without a few dragons, and God of War has three of the scaly fellows. You won't be slaying these majestic beasts, however, but will instead be freeing them in order to earn some sweet loot - and bask in the knowledge that you've done a good thing.

How to free the dragons

Each of the dragons is tied to a runic pillar, and setting them free requires a little more effort than just slashing the tether. Instead you need to find the runes nearby that correspond to the pillar keeping them captive. Destroy these runes, you can attack the tether and the dragon is free. Here's where you need to be looking...

Fafnir is to the north-east of the Lake of Nine behind the Alfheim Tower. You'll need to lower the water a second time in order to reach this hidden area. Go to the Alfheim Tower, head north and look for two oar-bearing statues. The caves you need are here.

Enter through the large double doors at the clifftop to enter the area. Look below the dragon's right foot for the first rune, just left of the rune table.

Follow the main path around to the left to find the second.

The third and final rune is on the upper level on the right - you'll need to climb the cliff to get there. A Traveler is guarding it, so be prepared to fight when you reach it.

Once all three runes are destroyed, return and battle two Vikens and a Revenant before setting Fafnir free.

The next dragon is in Veithurgard, to the east of the Lake of Nine, a region which also contains a few Eyes of Odin ravens, along with a Nornir chest. Rich pickings. From the Veithurgard dock, take the central path up the middle to find the dragon perched on the cliff.

The first rune can be found by running up the path toward the dragon, and then taking a hard left. Stick to the left and the rune will be at the edge of a cliff.

The second rune can be found by going to the right past the dragon. Follow the path for a short distance to find it.

The final rune means heading left of the dragon toward a collection of stones, and then right to a bridge with gold rocks blocking it. Keep going through the area, through the monolithic henges, and you'll get a better angle on the bridge that reveals an explosive pot. Detonate that to To clear the rocks, move through the area, going past a collection of Stonehenge-like structures to get another angle on the bridge. Aim for the explosive pot to clear the path, then head for the large rune-locked double doors and input the correct sequence (T and R, N and F) and keep going through the passage. Keep to the right and you'll emerge on a plateau with the last rune shrine.

With all three runes gone, return to the dragon and interact with the lock to free it. You're welcome.

You'll need to a bit of legwork to gain access to the final dragon. It can be found in Konunsgard, and you won't be able to go there until you finish Brok and Sindri's Favors. Every time you encounter these characters, talk to them and you'll get a minor task to perform. Do enough of these and they'll ask Kratos to quest to Konunsgard, at which point you'll be able to pass the locked door that protects the region.

Once there, the Konunsgard dragon is a fair distance inside, past the large double doors. It's easy to get lost and confused in this maze-like location so remember to keep your bearings. Once again, there are three rune shrines to find and demolish.

The first is easy: it's right there in front of the dragon. No sweat.

Head for the cave to the left of the dragon for the second rune.

Don't get complacent. The final rune is much trickier. It's behind a locked door that only opens when three nearby bells are rung at the same time. Luckily, there's World Tree Sap here as well and that's the trick to performing this seemingly impossible feat. Use the sap to throw a crystal behind the caged bell on the left. Now quickly shoot that crystal, and the sap near the bell on the right hand side at the same time, and immediately throw your axe at the upper left bell. Time it right and the sap explosion will ring two of the bells as your axe hits the third.

With the door open, head through and lower the bridge when you come to it. Now follow the path to the final rune shrine.

As always, with the runes trashed, you need to return to the dragon and set it free.

Congratulations - all three beasts have been liberated, and in return you'll get the Dragon Tear resource, which lets you upgrade the Shattered Gauntlet of Ages talisman, an approrpriately powerful relic.