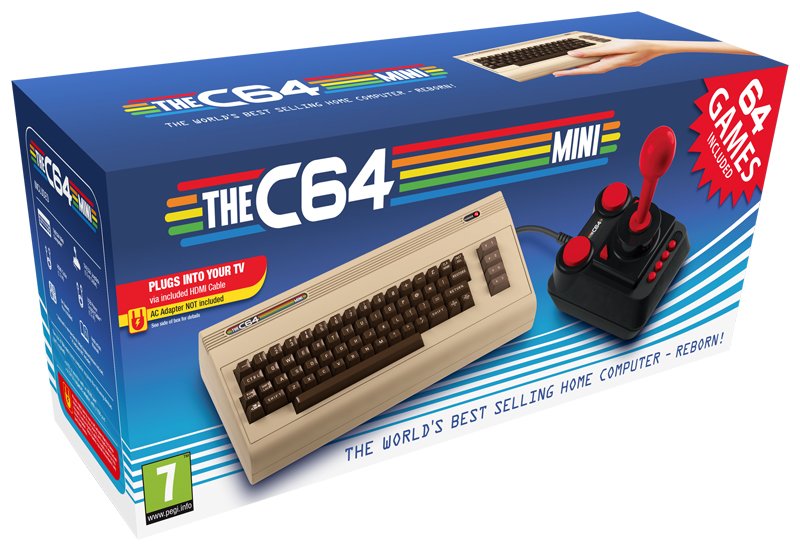 Nintendo has already produced miniature plug-and-play versions of the NES and SNES, and Sega recently confirmed a similar Genesis device will be released later this year, but what about gamers who grew up playing on home computers rather than consoles? Enter the C64 Mini, a faithful recreation of Commodore's enormously popular 1980s 8-bit computer.

Modelled to look just like that chunky beige beast, only in miniature form, don't be fooled by the keyboard - this is a recreation running emulated software, and those keys are just for show. Given that the whole device fits in the palm of your hand, we're not sure you'd want to type on these tiny things anyway. The joystick, equally as authentic in its retro design, is how you'll control the 64 games already loaded onto the C64 Mini. And, just like in the past, its a pretty stiff thing that can feel very rigid if you're used to playing on ergonomically crafted analog joypads. That refusal to bow to the modern way of doing things will delight gamers who grew up with such limitations, but may confuse and annoy those who came to gaming later on.

If you do want to use keys, there's a rudimentary virtual keyboard or you can plug in any USB keyboard and use that instead. This is also essential for making proper use of Commodore BASIC - yes, even the original operating system is emulated, so if you fancy dusting off those ancient coding skills and writing some of your own games by hand, you absolutely can.

In terms of emulation, the C64 Mini is an absolute success. There's a range of display options, with the default being a crisp 720p display in the original 4:3 ration via the included HDMI cable. You can add a CRT filter, if you want it to look more old fashioned, or blow things up to full screen width. There's even an option to switch between the US and European NTSC/PAL display standards. The only thing missing from the package in terms of hardware is a power supply - the C64 Mini only comes with a USB power cable, so you'll need to supply your own AC wall plug adapter. An old phone charger works just fine.

What of those 64 bundled games? It is, inevitably, a mixed bag with choices clearly limited by which titles were available for official licensing. The device is also designed in the UK, so the titles on offer skew towards the British C64 output - which isn't a bad thing, given how influential 1980s UK developers were at the time.

Both Impossible Mission games are included, as well as a range of Epyx sports games - Winter Games, World Games and Summer Games II. Pitstop II remains a fine arcade racer, albeit a simplistic one. Classic explore-em-up Boulderdash is always worth revisiting, as are future sport classics Speedball and Speedball 2. Uridium, Zynaps and Cybernoid will keep shoot-em-up fans happy. Games that may not be familiar to non-UK players include Wanted Monty Mole and Monty on the Run, two ruthlessly hard platform games that will appeal to fans of Spelunky, and Skool Daze, an absolutely fascinating simulation of high school life that went on to inspire Rockstar's Bully.

Perhaps best of all are the games that defy categorization in 2018; those quirky offerings that could only have been made at a time when genres were still fluid and even the biggest blockbuster titles were still made by a handful of people with creative freedom. Games such as oddball robot hacking maze Paradroid, melancholy graphic adventure Everyone's a Wally and top-down ninja adventure Avenger.

All the games are accessed by a simple but attractive carousel menu that offers trivia about each title, along with any optional settings. Unlike Nintendo's mini-consoles, you can quite easily add your own emulator files to the C64 Mini, although doing so at present is a bit of a trial involving putting the files on a USB stick, then using the Commodore BASIC feature to load them into memory. It's workable - and no harder than the sideloading hacks used to get more games onto the NES and SNES Minis - but without a keyboard to enter the BASIC commands, the on-screen key entry system is a little labor intensive. Apparently a simpler method of adding new files is planned in a future firmware update, the files for which are available on the official site.

So, is it worth it? For gamers who grew up in those first giddy years of home computing, the answer is absolutely yes. There have been plug-and-play retro gaming devices before, but none that are as flexible and open to evolution as this. The selection of games is solid - if UK-centric - but adding your own is a chore worth enduring given how lovingly the end result is displayed. And, if nothing else, that perfect recreation of the chunky brown keyboard makes for a nostalgic ornament all by itself!

If you never played these games first time around, their crude nature, brutal difficulty and stiff control will present a challenge - but one that's worth facing if you want to understand more about the seeds from which today's gaming industry grew. Thankfully, save states have been added, so even the hardest games are a little easier than they were originally.

The C64 Mini has yet to officially launch in North America, but is available from other retailers worldwide. You can check here for stockists.