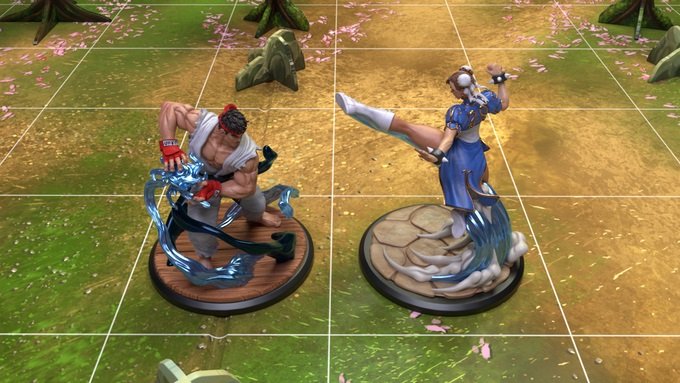 Jasco Games is bringing the world of Street Fighter to your tabletop, with a Kickstarter campaign that has already blitzed past its $400,000 goal in less than 24 hours.

Jasco has prior form working with Capcom, having previously turned Mega Man into a board game, and the Street Fighter project also involves YouTube personality Angry Joe, who is listed as co-creator and designer of the game.

Street Fighter: The Miniatures Game reinvents Capcom's legendary fighting series with lovingly sculpted and painted figurines battling on a 3D board, with combatants able to knock each other into adjacent squares where obstacles can cause damage. The dizzying combos, blocks, counters and specials that fans love from the video games are replicated using a system of dice rolls and decks of character-specific cards.

You'll be able to fight one against one, and the game will also offer a team option, where players can join up against boss fighters like M. Bison. Only two "stages" are listed in the campaign at the moment - Guile's Air Force base and a Japanese dojo - with more likely to be added as stretch goals.

Jasco is also very aware that it'll be those gorgeous miniature models that will draw the most attention however. Standing between 6.5cm and 8.5cm tall, they're undeniably appealing - a fact that the campaign is leaning into. "The miniatures are more like small collectable statues and makes them great for displaying around the house even if you don't play the game at all!" it boasts.

The Kickstarter campaign runs until May 5, and Jasco warns that while it may invest in a full retail release of the game in the future, that's not confirmed. In other words if you want it, you'll have to back it.