Twitch Prime users will have access to a variety of exclusive cosmetic items in Fortnite. 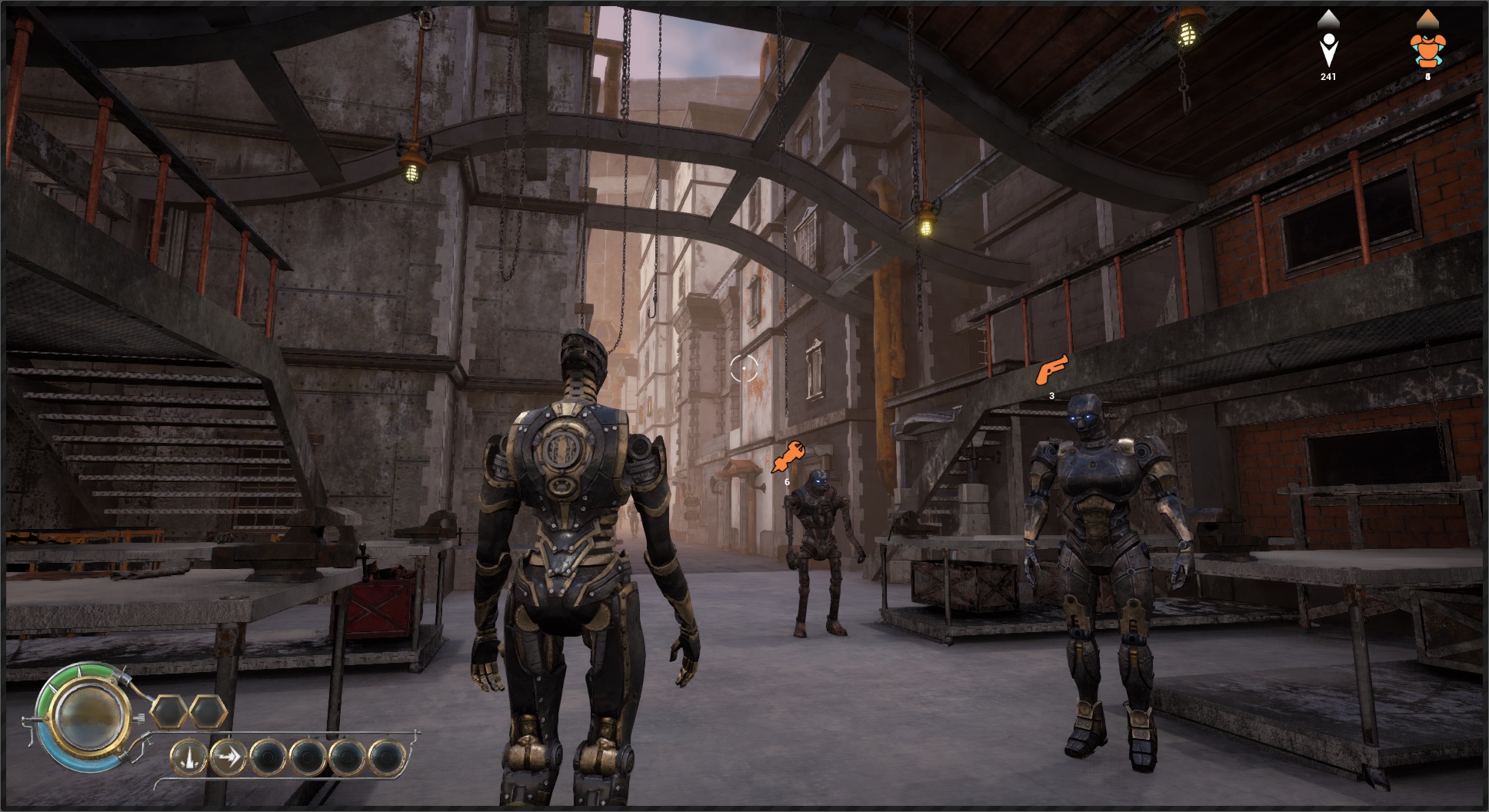 During this year’s Indie MegaBooth at GDC, a variety of new indie titles will be available for preview.

In the past, we’ve touched upon Gyre: Maelstrom from developer Evodant Interactive. A few notable examples include our first impressions from E3 2016, and our in-depth developer interview with Evodant back in 2017. While there are many features in Gyre: Maelstrom that help set it apart from other RPGs, one item in particular that captured our attention is the game’s usage of Evodant Interactive’s groundbreaking Toska Engine.

Recently, we received word from Evodant that—after a period of beta testing—Gyre: Maelstrom has been transformed into a similar, yet different project known as Gyre: Nova State. They also let us know that a crowdfunding campaign is in the works for Gyre: Nova State in effort to support the game’s growth into the best steampunk/dieselpunk RPG experience possible.

To accomplish this, Evodant is working to incorporate the wealth of helpful feedback received from early adopters. Some of the things players can look forward to in Gyre: Nova State include design improvements, better narrative integration, upgraded graphics, and an open world with more variation, among other features.

With so many exciting updates from Evodant, we found ourselves curious as to the changes being made to Gyre in its shift from Maelstrom to Nova State. We were also eager to learn more about the game’s crowdfunding campaign and how to help promote it. So, we sent over a list of questions which the team at Evodant was kind enough to answer.

Excited about the news regarding Gyre: Nova State? Read on to learn more about the game’s ongoing development!

A: GNS is a dystopian bio-steampunk, action RPG video game where you are a post-futuristic android forging your own unique story inside a world in conflict. What's bio-steampunk? Our game world is a unique mix of futuristic and steampunk elements with unique toxic effects that have gripped the planet resulting in some very intriguing entities and creatures. It's gritty and dystopian, a bit like dieselpunk, but the cross between biopunk and steampunk is more appropriate to describe our world.

Q: How is Gyre: Nova State different from Gyre: Maelstrom, and how is it similar?

A: GNS is an exciting direction for us. While we still operate in the same game world, we’re taking the feedback from our focus groups and early adopters and making a lot of changes. Instead of one large city we’re having multiple smaller ones, which means opening up the outside world. That allows us to introduce the evolved biome as a new experience to players.

We’re also changing several aspects of the design, including art style. We discovered some fantastic techniques for our art production pipeline that directly relate to our specific procedural development but due to technical requirements we didn’t integrate them into Maelstrom. With the new direction in tech (especially lighting) we’ll be able to implement those into GNS.

Another major difference is the removal of the base parkour system in favour of a more fun aerial system that we’re working on. We are streamlining the dialogue/interaction system, revising the entire skill system to align with the new design and adding combat and stealth features to allow players to explore those styles of play to a greater degree.

Crafting is getting an overhaul to improve the dynamic options created during play, to account for advancing the timeline and opening up gameplay into the wild. There are also significant changes on the technical side. We’re still using Unreal as he game engine but we’re shifting the environmental. Finally, the procedural narrative and AI systems are getting some polish to improve the feel of the story.

Q: You recently launched a crowdfunding campaign for Gyre: Nova State, what are some of the goals and things you wish to accomplish with this campaign?

A: We very much want to engage with our fans and offer them the opportunity to get involved early. We have a list of additional desired features we would love to implement – and our focus groups agree. However, for an indie team a lot of those are out of scope and budget right now. Depending on what the final amount raised will be, we’re hoping to be able to add some of those features. The features will be listed as stretch goals on the Kickstarter page.

Q: Will the Toska Engine be utilized in Gyre: Nova State?

A: Absolutely! It’s still a core part of the game systems that drive the real-time, dynamic narrative. Toska has had a few changes under the hood as well, so we are really looking forward to letting it shine in the revamped design.

Q: What are some solid pieces of feedback you received from gamers testing out Gyre: Maelstrom, and how did this feedback shape Gyre: Nova State?

A: Our early adopters felt the gameplay was “clunky,” “strained,” and “not fun.” We listened, intently. Parkour was cumbersome with the minor “flight” capabilities available and the general design of the city. Other parkour-based games are more suited to that style. It’s ultimately not the core experience. We wanted the movement systems to support the combat-stealth-intrigue styles of play seamlessly in conjunction with our skill trees and equipment. All three styles of play needed a few key elements to make them flow better, so we’re addressing those in the GNS.

Q: Gyre: Nova State is described as a “dystopian, bio-steampunk action RPG.” For those unfamiliar with the steampunk and dieselpunk genres, what other works (be it games, books, film, etc.) would you recommend they check out to get a better feel for Gyre: Nova State?

A: Biopunk largely focuses on synthetic biology, so for us that touches on the nature’s evolutionary progress. We still have steampunk as a core but it takes a futuristic slant. Some examples that have core concepts (not necessarily the aesthetic) are the Dark Angel TV series, Orphan Black and the more recent Altered Carbon for it’s dystopian feel. The novel The Windup Girl by Paolo Bacigalupi is a great reference.

Dieselpunk tends to project a WWII feel with diesel-based technology and we don’t align to that directly in the game. There is a “world war” feel but the tech also encompasses energy-based sources while retaining that gritty dieselpunk look. A deep influence here would be the movie Dark City. There is a sense of retrofuturism.

Q: Have there been any challenges in expanding and changing Gyre: Maelstrom over to Gyre: Nova State?

A: We’ve certainly had our post-mortem on Maelstrom which pointed to some key resource and technology constraints. On the tech side one of the biggest challenges was the use of dynamic lighting because we were generating a unique city on game start, not design time, the likes of which you might see in Ubisoft’s Snowdrop Engine or Star Citizen’s procedural design systems. We successful built that real-time generation system but going forward we’re using a hybrid approach to achieve higher frame rates for smoother gameplay and better alignment with the environmental design.

Q: What’s one change you think fans will be most interested in when it comes to Gyre: Nova State?

A: It will likely be the flow of gameplay, even when interacting with other characters. With all the integrated procedural systems, we want players to feel the cohesive flow as they move through the world and experience a consistent story.

Q: Has Evodant Interactive been working on other projects related to Gyre: Nova State aside from the game’s core development?

A: We’ve actually been slowly working away on a small mobile game in the same world called Gyre: Trespass. With Toska, we’ve naturally had a lot of interest from other publishers and IP holders with an interest in dynamic narrative generation. So, we’re constantly exploring future projects and prepping Toska for use in other projects. Beyond that we’re also looking very closely at blockchain technology and how we might employ its use in future products and services.

A: The expected launch is early 2019, with PC as the first platform. We still expect console to be a target as well.

Q: Lastly, what’s the most important thing fans should know about Evodant Interactive and the work you’re doing on Gyre: Nova State?

A: The work we’ve done with Toska and dynamic narrative is at the top of that list. There’s also been some really cool advancements on the AI side that integrate with Toska. Character behaviours are even more dynamic, generating even better stories and more engaging characters. Behind the scenes, the most important thing we’ve done is turn the development process on its head and build a procedural systems framework that makes a small indie such as ourselves punch above our weight class and achieve similar results to AAA studios.

We want to thank the team at Evodant Interactive for taking the time to answer our questions about Gyre: Nova State. As 2018 progresses, we’re looking forward to keeping up with the growth and development of Gyre: Nova State, and will be sure to share updates as they’re released here at Indie Obscura!