Where to loot, which guns to use and more. 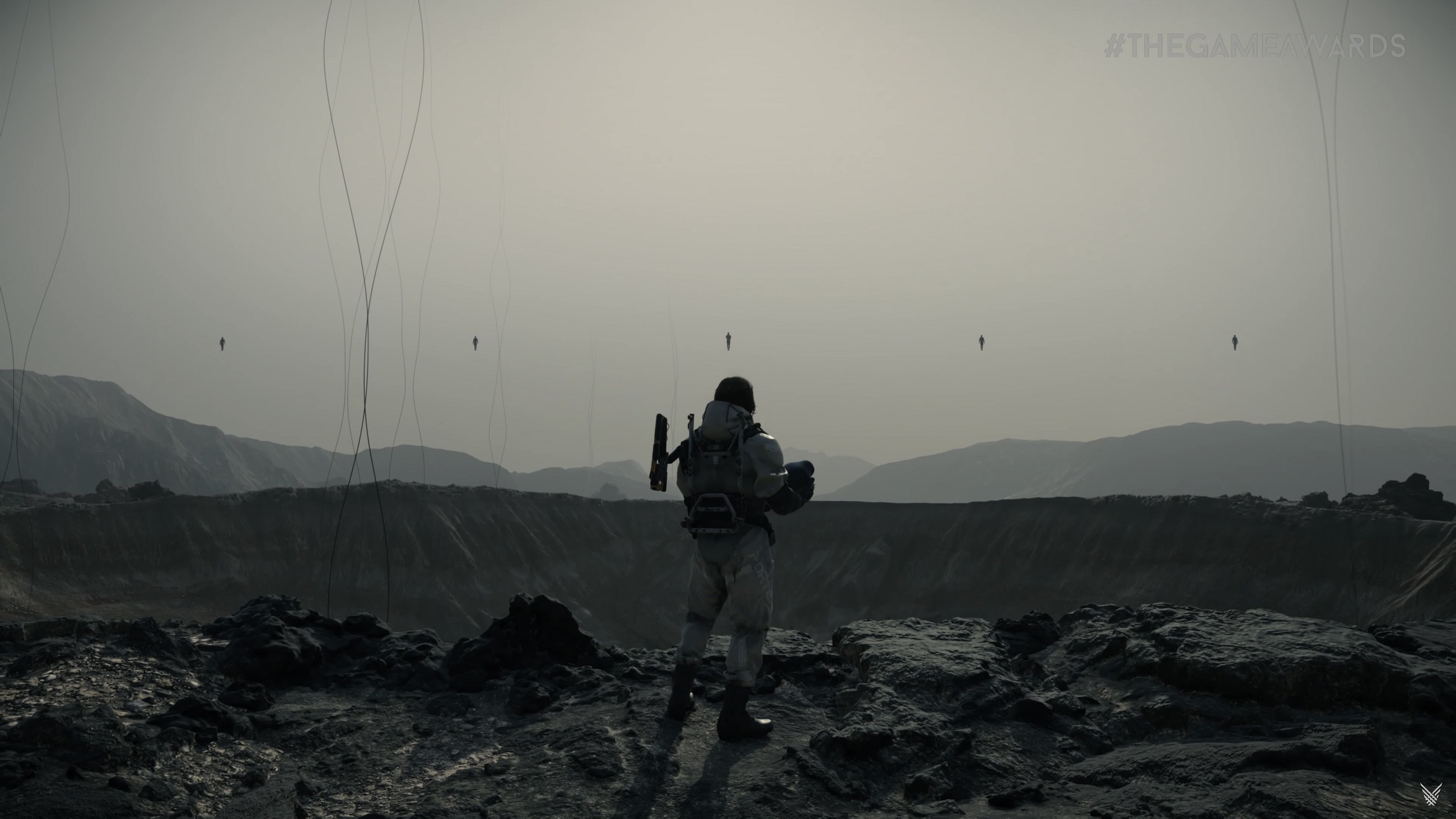 The PUBG test server lets players try out the latest patches and updates, including the new Miramar map.

A brand new trailer for Hideo Kojima’s latest project, Death Stranding, dropped at The Game Awards 2017. Unlike previous trailers, this one comes in at a whopping 8 minutes in length and features clear dialogue for the very first time.

Having watched the third Death Stranding trailer closely, we felt it it necessary to slow things down and snap some still images of things that we feel are of importance to the game's story. Below, you'll find a comprehensive overview of everything you might've missed in the latest Death Stranding trailer. So, let’s get started!

The latest Death Stranding trailer opens with the following dialogue:

"Once there was an explosion, a bang which gave birth to time and space,

Once there was an explosion, a bang which sent a planet spinning in that space,

Once there was an explosion, a bang which gave rise to life as we know it,

And then, came the next explosion..."

The third trailer mirrors the setup of the first, with Norman Reedus waking up in a strange, muddy location. He doesn't appear to be on a beach. If anything, it looks as though he's on a different planet. On his uniform, you can see two sets of numbers: one on his chest, the other on the device he's wearing.

As he stands up, we catch a glimpse of the word "Porter" written on his uniform's shoulder, thigh, and hood. Could this indicate the character Norman Reedus is playing has the last name of Porter?

It's definitely possible, especially considering his colleagues in orange don't have "Porter" written anywhere on their uniforms. Of course, "Porter" could also be a company or brand.

With this in mind, we couldn't help but wonder how Norman's character relates to the other two men, as they have different uniforms with the "B.R.I.D.G.E.S." logo from the second trailer clearly emblazoned on them.

Additionally, both have similar arm bands which proclaim them to be part of "Team G" (the top portion was too difficult to make out).

The two men in orange consist of a man trapped under a flipped vehicle that looks a lot like a space rover (sparking theories that parts of Death Stranding will be set in space), and another man desperately trying to free him.

As the man tries to free the pinned man, the device on his back begins to open and close and he says, "Shit, they're here." After bringing this to attention, the pinned man mysteriously starts to age rapidly. His face becomes gaunt, his teeth yellow, and his hair turns white.

In stories—particularly within the horror genre—this is used to denote extreme fear. Perhaps the pinned man is afraid of drawing the attention of the encroaching entities?

Panicked, the older gentleman looks over at Norman Reedus' character and shouts, "Sam!"

This is an exciting development, as we now finally have a name to call Norman Reedus' character... Sam. After being called out to, Sam responds, "Shut up, don't even breathe."

Apparently, these things are drawn to sound and motion, as all three men place their hands over their mouths and attempt to stay as still as possible. The music shifts, and we see large, sinister handprints move across the rover then down into the mud.

The elder gentleman watches as handprints move towards Sam, but then divert off in a different direction. He gives Sam a thumbs up, and the camera pans to show Sam as he moves away from the corpse he's been hovering over.

After Sam takes a step back, we see the corpse begin to violently thrash on the ground. The skull emits some strange sort of dust before seemingly melting into the ground.

Is this in response to being touched by the invisible entities? Is this a human corpse at all? Judging from how Sam interacts with it, it's possible that it could indeed be a sample the crew collected and intend to analyze.

Seeing something in the fog, Sam stumbles and crawls backward on the ground (his injured leg leaving a trail of blood). The handprints pursue him, so he freezes and the entity decides to go after the pinned man instead.

The man is dragged out from beneath the rover by the entity and begins to be pulled off into the distance. The older man who was trying to free him pulls out a gun and cleanly shoots him in the head.

Apparently, you really don't want to be caught by whatever these invisible entities are (which is emphasized again towards the end of the trailer).

Then, we get a quick glimpse of a masked man who descends from the sky and lands on the flipped rover. On his back, he wears a similar device as the one worn by the older gentleman. However, his looks slightly different (smaller, three prongs instead of five).

Some theories suggest this man could be Mads Mikkelsen's character from the second trailer due to the way he signals. In the second trailer, Mads' character shushes his team before pointing twice as a signal. The masked man on the rover displays the same exact gesture.

Because the masked man's appearance is so brief, it's honestly impossible to discern who he might be at this time. We do like the Mads Mikkelsen theory, though.

After the masked man disappears, we catch a glimpse of the baby from the first two trailers. Black liquid begins to rise around the feet of Sam and the older man. The older man panics and seems to shoot at nothing (at least nothing we can see).

As he retreats, creatures within the black liquid grab at his legs. Realizing he's in a terrible situation, he throws down the baby tank and attempts to shoot himself in the head. He fails, is plucked up by the leg, and begins floating upwards towards the sky.

He then grabs a pocket knife and begins violent stabbing himself in the chest and stomach. Again, this suggests that these entities are NOT ones you want to find yourself captured by alive.

Sam picks up the tank dropped by his colleague with the infant inside, then looks up at the sky. There, he sees a giant behemoth holding onto 5 threads in each hand. This is definitely one of the most startling images in the latest Death Stranding trailer.

After seeing the hulking behemoth, a white light flashes and Sam finds himself transported to an underwater landscape. There, he's naked (as he was in the first trailer), and appears calm.

You see fish, a floating car, and a floating car door with "B.R.I.D.G.E.S." clearly labeled on it. Bodies float above him, and a creature quickly passes above the surface of the water. It's hard to tell what the creature is, as you only get to see a silhouette.

The underwater scene shows Sam back in his suit before panning down his throat for some reason. Inside, we see the baby from the tank, who looks up and gives a cute thumbs-up.

This is definitely a Hideo Kojima level of bizarre, but we can't help but love it. Apparently we're not the only ones, as people have already made GIFs out of this scene!

When Sam wakes up in the original area, he vomits out black liquid with small creatures in it. He then picks up the tank and finds it empty, which causes a tear to fall (reminiscent of him crying after finding the baby's body on the beach in the first trailer).

An interesting tidbit here is the spaceman charm on the empty tank. For us, it lends additional credence to the theory that parts of Death Stranding are set in space.

Of course, it could simply be in reference to the Kojima Productions logo. However, its clear placement and the fact that the trailer takes the time to show it to us makes it worthy of note, regardless of its meaning.

In the last scene, Sam stares out at the alien landscape and sees the same five floating entities that concluded the first Death Stranding trailer. The dialogue from the trailer's opening concludes with:

"Once there was an explosion, a bang which gave rise to life as we know it,

And then, came the next explosion."

You can watch the third Death Stranding trailer in its entirety down below. What do you think of the latest trailer? Did you catch something that we missed? Let us know your theories in the comments!