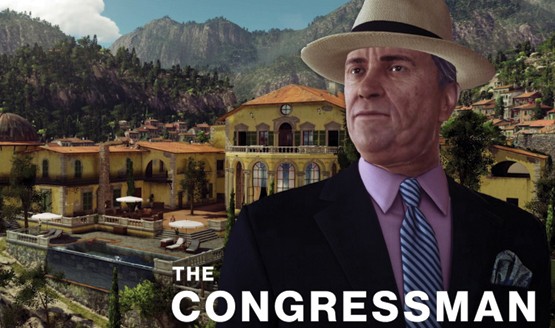 Hitman – How To Complete The Congressman Elusive Target

Hitman developer Io Interactive is giving all players a second chance at eliminating the game’s high risk/high reward Elusive Targets, and if you missed out on the game’s second target, The Congressman, when he first showed up in the Sapienza location, you now have another shot at taking him out. Just be sure you act sooner rather than later as The Congressman will only be available until the end of the week.

If you need help in figuring out how to quickly and efficiently dispatch The Congressman, the below guide should help you eliminate him while also earning the coveted Silent Assassin rating.

Taking out The Congressman quietly is actually pretty easy as long as you know where to go and have unlocked the right level-specific assets. First, you’ll want to make sure you have completed enough challenges in the standard Sapienza scenario to unlock the lethal poison vial and the starting location where you begin disguised as a kitchen assistant in the mansion kitchen. With both of those assets unlocked, you’ll then want to equip the lethal poison vial and the coin as your two items during the Elusive Target planning screen and select the mansion kitchen starting location.

Once the level loads up, immidiatly skip the opening cutscene and turn around from where you’re facing when the level begins. You’ll spot an open window which you’ll want to climb through. After you’ve climbed through the window, turn to the right and jog down towards a door you’ll spot on your left. You’ll first come to a large pair of double doors, skip them and keep jogging until you reach a smaller single door, that’s the door you want to go through. Once you’re through the door, turn immidiatly to the right and you should spot a staircase leading down to the mansion’s basement.

Once you’re down the stairs, stop and look to your immediate left. You should spot a housekeeper disguise on the floor, put it on. With the housekeeper disguise equipped, open the door that’s near where the disguise was lying and you should find yourself in the large wine cellar with a waiter NPC standing nearby. You’ll also see a glass of red wine, its accompanying wine bottle, and a candelabra resting on a barrel that’s immidiatly to your right when you enter the wine cellar.

You have to poison the glass of wine using your lethal poison vial, but if you try to just do so immidiatly, the waiter will spot you and raise the alarm. Instead, what you want to do is head over to the left after entering the wine cellar, move behind the large pillar the waiter is standing near so that you’re not in his line of sight, and then throw one of your coins off into the area behind the waiter so that he gets distracted and goes off to find the coin, thus allowing you to poison the wine glass. Make sure the waiter doesn’t see you throw the coin or he won’t go to find it.

With the wine glass poisoned, all you have to do now is wait. The Congressman will eventually make his way down to the wine cellar and drink that same wine glass, killing himself in the process. You can quickly exit the mansion grounds by heading down the hallway in the wine cellar (towards the area where you threw the coin if you tossed it behind where the waiter was facing), turning to the right, jogging down the second hallways to the garage (you’ll spot a parked car in the distance), turning to the left, heading out the open garage door, and just walking out the front gate (the two guards won’t bother you if you’re wearing the housekeeper disguise).

Similar to the poison strategy which we covered for Hitman’s first Elusive Target, it can take a little while for The Congressman to finally head down to the cellar and drink his very last glass of red (about 8-10 minutes), so you’ll have to be a little bit patient. While you’re waiting, you can wander around the Sapienza level at large if you like, just make sure you don’t do anything suspicious if you don’t want to compromise your Silent Assassin rating. If you want to play it absolutely safe, just wait around right outside the mansion. Once you’ve received the notification that the target is dead, you’ll also want to make sure you wait around before exiting the level to see the “Unnoticed Kill” tag pop up (about 5-10 seconds) to ensure it is registered for the Silent Assassin criteria.

When you see the tag come up, you can exit the level via the buggy car that’s parked right outside the mansion. If you’d like a video walkthrough as a visual aid for running this strategy, the below video from YouTuber MrFreeze2244 should help.