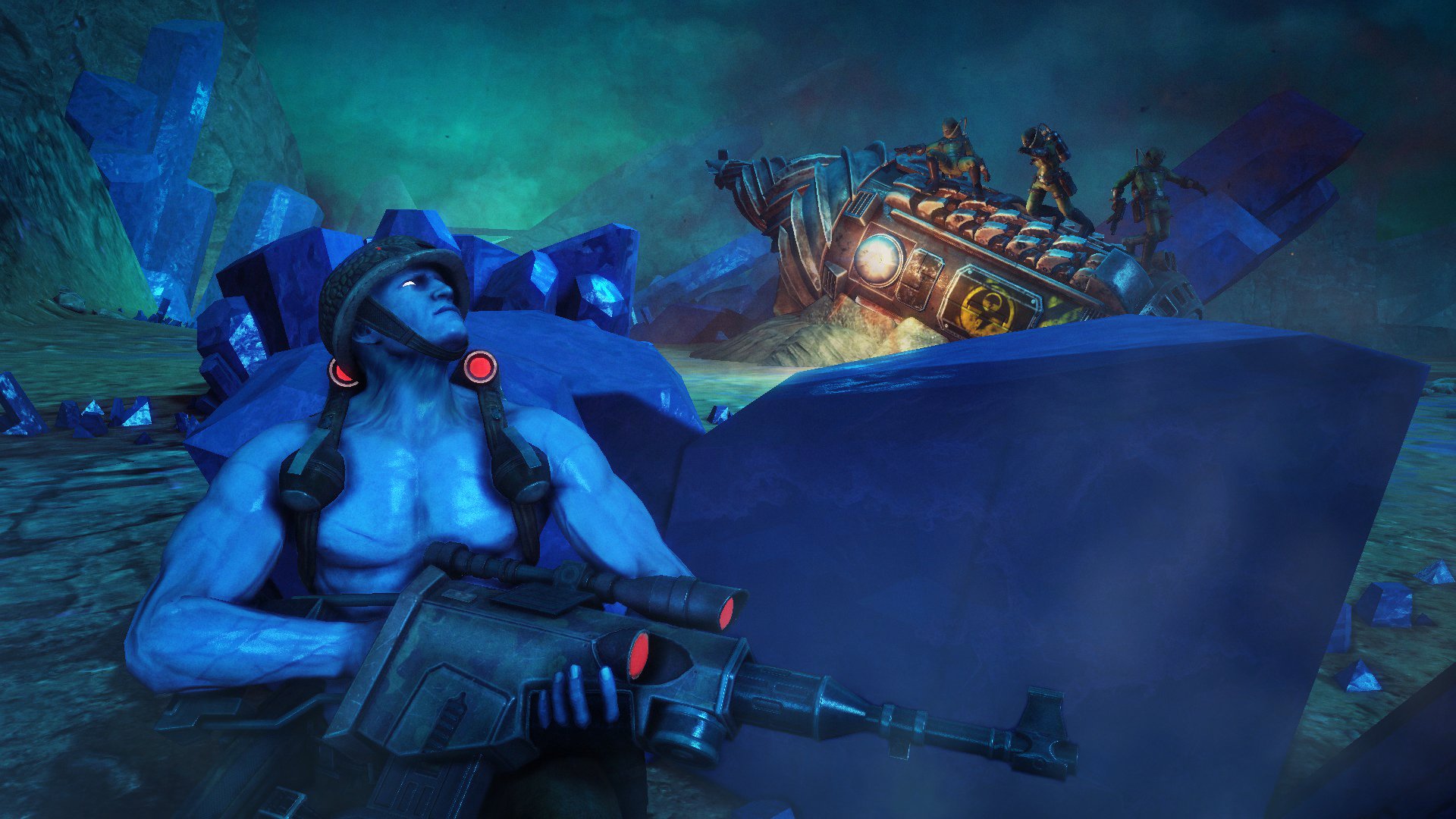 Rogue Trooper Redux arrived on consoles (and Steam) yesterday, putting a fresh coat of blue paint on the Genetic Infantryman. That new skin has been met with middling reviews as there’s only so much polish you can put on games of a certain era. It’s only been 11 years since 2000AD’s comic came to life in Rebellion’s third-person shooter, but the genre has moved on so quickly that Rogue has been left behind. Here we put on our cyan-tinted glasses and look back fondly on 2006’s original.

For those unfamiliar with Rogue Trooper, the comic came from Judge Dredd’s birthplace: British sci-fi anthology 2000AD. In a far-off future, humanity colonised a new planet and simultaneously lost their ability to think creatively. As a result, two factions known as the Norts and the Southers re-enacted the American Civil War over Nu-Earth with chemical weapons, irreversibly poisoning the entire biosphere. This forced them to continue their spat but now wearing Chemsuits, which were bulky and hard to see in and gave them giant canister-shaped weak points on their back.

In an uncommon bout of lateral thinking, the Southers developed the Genetic Infantrymen – blue-skinned super soldiers capable of withstanding the toxic atmosphere in their bare skin. They then dropped the entire regiment into one battle, in The Quartz Zone, where they’re almost entirely wiped out because a traitor leaked the battle plans to the Norts. All except for one (and maybe a couple of others who turn up late in the comic’s original run) who goes rogue and is very much a trooper.

Having lost his best pals in The Quartz Zone Massacre, Rogue inserts their biochips – a chip that downloads the GI’s consciousness before death so they can be redeployed in a new body – into a slot in his equipment. And through a stroke of nominative determinism, Gunnar, Helm and Bagman each find fitting homes. Honestly, they’re called that before they die, there’s a cutscene and everything.

The game itself is just as straightforward and literal as its source material, which is definitely not to its detriment. In the spring of 2006, the market was fresh for third-person shooters, prior to Gears of War’s original release in November and the subsequent rush to replicate its “Roadie Run”. This was before blocks of chest-high cover fortuitously littered every battlefield eliciting a groan of “well, I guess I’m gonna get into a big fight here then”.

In that space, Rogue Trooper was able to carve out a brilliant niche for itself; a thinking man’s shooter with a wide array of cool functions for Gunnar to morph into. Crafting, too, was a far-off concept and Bagman’s ability to turn collected Salvage into new upgrades was thrilling, if not revolutionary. There was a lot of game here with not much story getting in the way, and it was exactly what we wanted in the doldrums of early 2006.

Perfect Dark, the N64’s best shooter (do not @ us, GoldenEye stans), made waves with weapons far beyond its years. One of which, the Laptop Gun’s secondary fire Sentry Mode made it into Rogue Trooper’s arsenal as a key bit of kit. In a game where enemies acted intelligently in regards to seeking and driving you out of cover, Gunnar’s sentry configuration was indispensable.

Blind-firing around cover to force heads down, before using the grenade launcher attachment to flush them back out, the gunplay in Rogue Trooper was a great lungful of fresh air despite its poisonous atmosphere. But going back to the original (and the Redux, which appears to have changed nothing other than textures, so faithful an update it is) even this felt stale in the harsh light of 2017.

Rogue Trooper’s decade away from gaming left it perfectly preserved in time, like a dead GI in their cold Quartz Zone tomb. But there’s no denying its effect on the genre, even though it may be overshadowed within the same year by CliffyB’s monstrous Gears franchise. Even Gears felt the strain of cover-based third-person throughout its lifespan.

As a snapshot of what titles were offering to a pre-Next Gen era of gaming, Rogue Trooper was the zenith. Barely on the cusp of timeless, but still bearing all the hallmarks of its time. If you want to experience a little time capsule from 2006, get the original, the Redux does it no favors worthy of the extra $20.