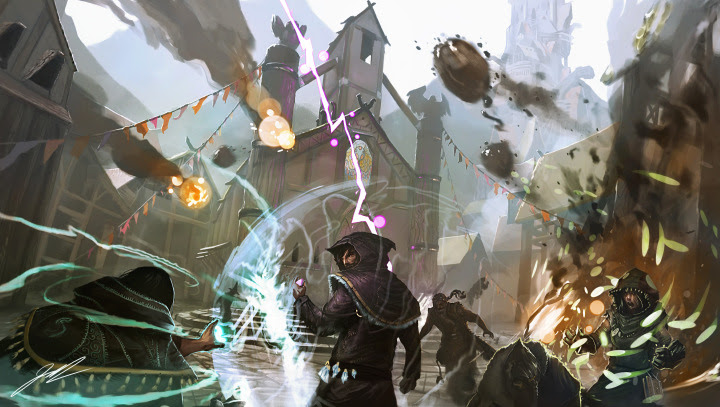 Sci-fi exploration game Morphite is out now on the Switch eShop.

Note: this review was written using a code provided by the developer which instantly unlocked all of the game’s playable classes.

Grimoire: Manastorm has been on quite an interesting journey. The “multiplayer wizard FPS” as developer Omniconnection calls it first showed up on Steam way back in 2015 as a paid Early Access title, but the reason I’m writing this review now is because Grimoire also just recently re-launched as a full free-to-play game, though calling it “full” might be a bit of a stretch.

You see, while Grimoire does present players with a unique sort of competitive deathmatch setup which trades out guns and gore for spells and runes, it also embraces the old “you get what you paid for” adage in the worst ways possible.

The narrative behind Grimoire is, unsurprisingly, not very fleshed out, serving as little more than an explanation as to why a bunch of wizards have gathered together to obliterate each other with different forms of magic. Two rival wizard families are vying for control of a powerful artifact, the titular Grimoire, and they’re seemingly content with letting their respective disciples blast each other to bits to acquire it. Of course, from a gameplay perspective, the conflict is much more straightforward, featuring both free-for-all skirmishes and Conquest-style control matches.

There are six different wizard classes players can choose from: Fire, Ice, Lightning, Earth, Nature, and Void, with each class utilizing its own unique spells and skills. Players have free access to a rotating selection of two different classes, and they can also permanently unlock access to a given class by purchasing it with either in-game currency earned from matches or with real money. The in-game currency that’s earned from completing multiplayer matches can also be used to unlock new spells for each class, though the unlockable spells usually only function as slightly modified versions of a class’s default spells.

Aside from unlocking new classes and spells, Grimoire doesn’t really have any other long-term incentives to work towards like achievements or cosmetic unlocks, so keep that in mind if those are the sorts of rewards that usually motivate you to play. Omniconnection was also kind enough to add in a rudimentary single-player survival mode which tasks the player with defeating waves of AI enemies like skeletons and golems, but no in-game currency is earned even if you successfully complete a survival match, so the entire mode is little more than a glorified practice arena (which is odd because Grimoire also has a dedicated tutorial experience).

As you might have already been able to tell from the included screenshots, Grimoire was developed using the Unreal 3 engine, and thus its graphics appear very dated. Again, this is probably not something that will bother all players, but if you tend to be a stickler about graphical fidelity, Grimoire likely won’t appeal to you. I certainly won’t ding Grimoire for its dated graphics since I’m sure Omniconnection did the best with the assets it had, but it can admittedly be a little hard to feel immersed when you’re playing a game that looks like it was made in 2003.

Chances are you hadn’t heard about Grimoire before reading this review, and going by the game’s player population stats on Steam, you’re far from alone. Since its free-to-play re-launch last month, Grimoire’s highest spike of concurrent players was 65, and on average its daily player count has rarely risen above 50. This means that most of the game’s online servers are usually empty or populated by no more than one or two players (you can’t make your own custom servers), though during my time playing the game for review, there was usually at least one server that was mostly full.

There is also a bit of AI bot support if you want to play on an empty server, but only a small number of bots is spawned in (I guess on the off chance that more players join mid-match) and you can’t manually add more bots. The silver lining is that in-game currency is awarded for completing a match even if you just spent that entire match farming bots, so if you *really* want to unlock a new wizard class or spell without subjecting yourself to actual PvP combat, the empty servers can actually be a blessing in disguise.

While all of Grimoire’s wizard classes feel more or less balanced and there’s a decent number of different maps to play on, only those dedicated few are likely to stick around for the long-term, and it’s those same dedicated few who will keep stomping on you in competitive matches while you desperately try to learn the ropes. Since it’s free-to-play, Grimoire: Manastorm can be ideal for a few fleeting thrills, but there’s little else about the game that’s worth investing in, especially if you consider yourself to be a more casual shooter fan.