Once limited to Europe and Japan, North American gamers may be able to get their hands on a SNES-themed 3DS XL this November. 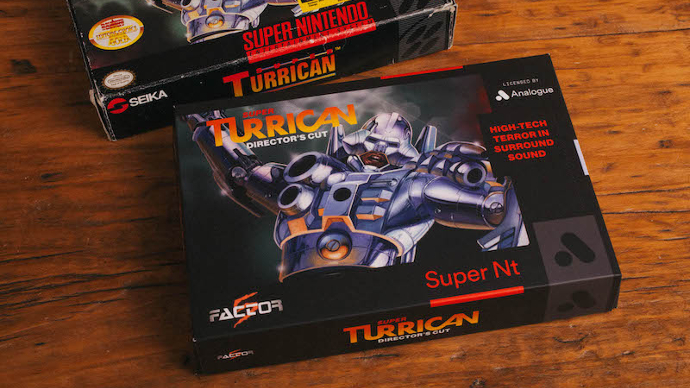 New information about the upcoming Shin Megami Tensei game on the Nintendo Switch has officially been unveiled.

Unless you were a die-hard Super Nintendo fan way back in the original console’s heyday, the name "Super Turrican" probably doesn’t mean much to you. But if you do remember playing now defunct developer Factor 5’s cult classic back when it originally launched for the SNES in 1993, you’ll be happy to hear that the upcoming Super NT retro console from Analogue will come with a specially remastered version of the game called Super Turrican: Director’s Cut.

The story of Super Turrican is a fascinating one. While the game was technically released for the SNES in 1993, Factor 5 was apparently forced to cut out some of the game’s content so that it could shrink the file size down from 6 MB to 4 MB in order to meet the demands of its publisher. This was all revealed in a Nintendo Life writeup in which Factor 5’s former president Julian Eggebrecht revealed exactly what had to be taken out:

“The whole final level was cut, including an extra boss. One of the level's unique gameplay gimmicks was that you had to use Turrican's freeze beam to "unfreeze" enemies in order to progress, a unique gameplay twist for this section of the game. If you ever had a feeling the game abruptly ends and feels like there was something else left to do, now you know why.”

The Nintendo Life writeup also reveals that Factor 5 had planned to release the uncut version of Super Turrican for the Wii’s Virtual Console back in 2008 as a special bonus for those who purchased both the Virtual Console versions of Super Turrican and its sequel Mega Turrican, but sadly that plan had to be cancelled due to Nintendo’s policy at the time of not publishing any game that wasn’t commercially available previously.