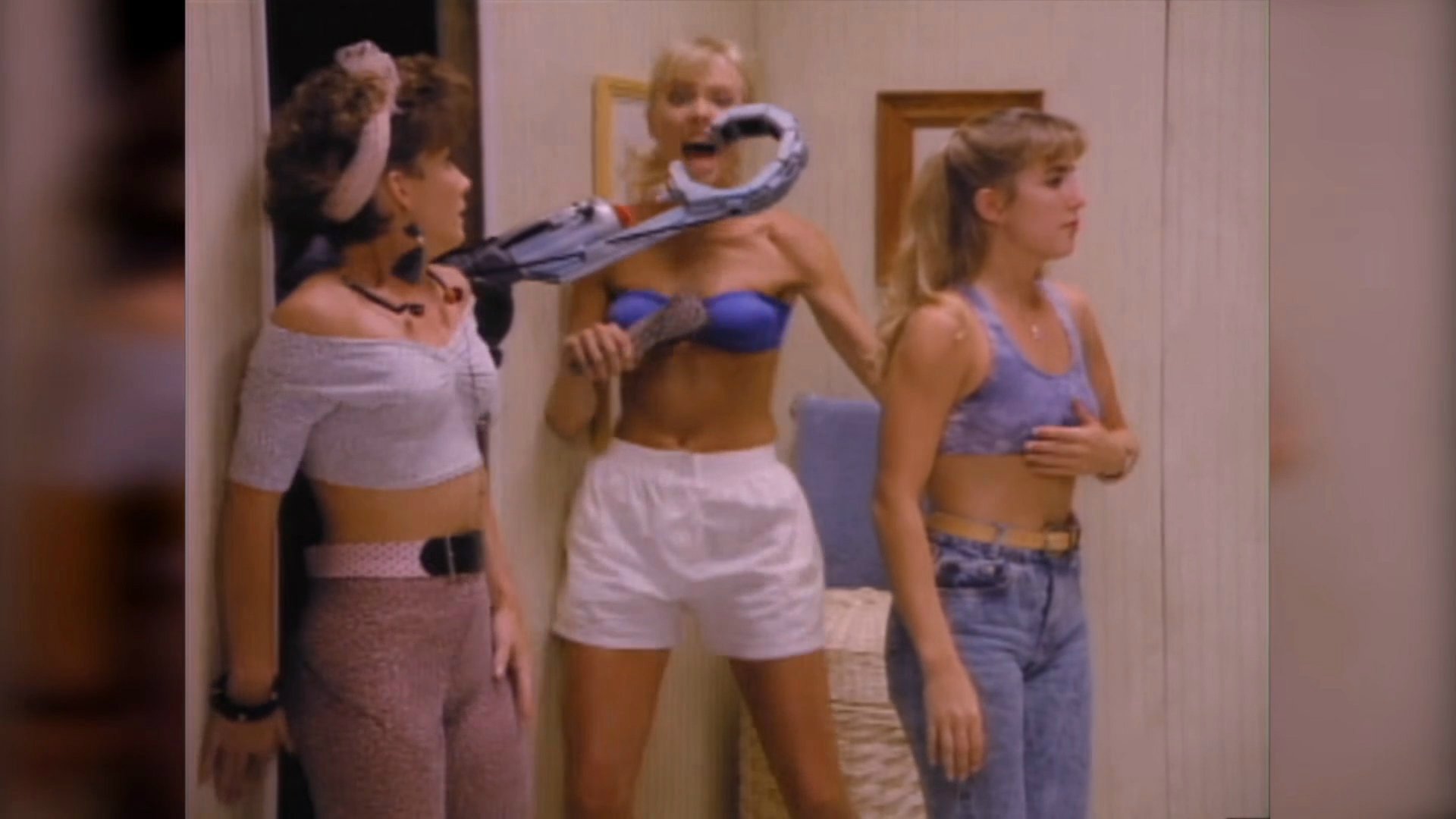 You may recently have seen us running through the red top archives for the weirdest gaming controversies we could remember. It was 100% the intention to include Night Trap and the years of senate-level moralizing wasted on an FMV horror game from the early 90s, but then we remembered the goat thing and had to make room. Fittingly, it’s Night Trap’s 25th Anniversary this weekend, so close to Friday the 13th in the month of spooks, so we get to spend a little longer looking back at one of gaming’s roughest gems.

But on October 15 1992, the ability to chill parents’ bones just by mentioning the name of Night Trap was far beyond what Sega and Digital Pictures had in mind for their fun, campy ode to 80s horror. The FMV “interactive movie” game came out of a pitch for a brand new console, the Control-Vision, in 1986. Axlon – chaired by Nolan Bushnell, the founder of both Atari and the Chuck E Cheese restaurant chain – produced a prototype VHS player from a modified ColecoVision allowing them to store huge amounts of data and, crucially, filmed video.

Axlon put together a game using video of robberies and other crimes happening, as if viewed through a bank of CCTV monitors, and called it Scene of the Crime. After successfully pitching the console to Hasbro, that family-friendly toy and board game company, development began on Night Trap with a budget of $1.5 million. The bulk of the work was shooting footage, all completed in 16 days during 1987 with the biggest named actress the crew could find: Dana Plato. Plato was fresh from starring in Diff’rent Strokes and attempting to make a go of a solo career, marred by trips to rehab for drug and alcohol abuse as so many child stars were in the late 80s.

Sadly, two years later Hasbro ditched the entire Control-Vision project leaving Night Trap all but complete but for a system that simply didn’t exist. The VHS system was already projected at a $199 price point, but then unforeseen DRAM costs sent that up to $299 and in the same year the NES released for $100. As history reveals, there’s no competing with that really, so Hasbro made the smart choice to pull the ripcord.

Executive producer Tom Zito snapped up the footage for Night Trap and founded Digital Pictures, then Sega swooped in with the revolutionary Sega CD attachment for the Genesis, which had plenty of room for heavily compressed video to be stored on a CD-ROM for FMV sequences. The stage was set for the Sega CD’s first interactive movie to change the face of gaming as anyone recognized it.

Of course, the reality was that Night Trap was a B-movie plot at best with gameplay that consisted of ignoring the story while waiting for a light to change color and pressing a button. For those unfamiliar with the game – and even those who played it since the opening expository scene was cut from the original game to save space on the CD – you are a newly recruited member of the Special Control Attack Team (S.C.A.T, originally called Sega Control Attack Team) tasked with investigating and preventing teen disappearances at a winery estate.

The S.C.A.T (honestly, that’s what they went with) has placed a single agent, Kelli (played by Dana Plato) among the girls spending their weekend at the estate after being invited there by the Martins, a family of VAMPIRES – or at least in the process of turning into vampires. For some reason this family of vampire sympathetics, out in the middle of nowhere on a winery estate they own in an obvious ploy to abduct teen girls, have rigged their house with traps. S.C.A.T have managed to hook into the traps and cameras and have put a complete newbie in charge while vampiric beings called Augers constantly try to sneak into the house to abduct the girls.

All of this leads to a single scene in the game which embroiled Night Trap in a farcical worldwide litigation which ended up in front of the US Senate. The game ends if you allow any of the girls to be killed or let too many Augers prowl about the house. One game over scene depicts Lisa being trapped by three Augers in the bathroom while getting ready for bed wearing a night gown. After a short, extremely tame struggle – with heroically over-the-top B-movie horror screams from actress Debra Parks – the Augers attach the blood-drawing hook device thing to Lisa’s neck and she helpfully walks backwards off screen with them.

In the same year, Mortal Kombat released on the Genesis and Super NES, pricking the eyes and ears of parents, public officials and eventually Senators Joseph Lieberman and Herb Kohl. The switch from harmless 2D-art sprites to realistic representations of humans in games that also featured violence made this a matter for congress to decide on. A year on from Night Trap’s release, in December 1993, Tom Zito was called up in front of the US congressional hearing on video game violence to defend this ridiculous scene.

Zito claims he was silenced while attempting to explain the context of the drill-like blood draining device, and in the documentary Dangerous Games – included in Night Trap’s 25th Anniversary Edition – explains the device was intended to look incredibly unrealistic to avoid these kinds of complaints. Designer Rob Fulop was also said to be baffled as to why his silly game was being tried alongside Mortal Kombat which featured characters literally ripping the beating heart out of their opponents. That's up against a game that has a theme song, that the characters sing, using tennis racquets as guitars.

Night Trap was just a pawn in a much bigger game between the big players in the video game industry at the time. Sega capitalized on Mortal Kombat and Night Trap’s unwholesome public opinion to further push their image of being the “edgy” company, evolving from Sonic’s innocent ‘tude to the bad boy of home consoles. Nintendo dutifully played their part as the family business when they sent senior vice president Howard Lincoln to testify in front of the congressional committee to vaguely pronounce that Nintendo would never carry a title like Night Trap on their systems as it didn’t pass “guidelines”.

Lincoln failed to specify that these were, in fact, technical guidelines that Night Trap’s FMV sequences could never be supported by the SNES’ hardware, and allowed it to be interpreted as a moral stance on violence which – coupled with the company’s decision to replace the blood in Mortal Kombat with sweat – positioned them as a family-friendly company and distanced Nintendo from the scandal entirely.

As a direct result of the hearings, major toy chains Toys “R” Us and Kay-Bee Toys were on the receiving end of a suspected organized telephone campaign to drop the game from shelves. It worked, and two weeks before Christmas 1993 Night Trap was locked out from what were, at the time, two of the biggest markets in games. And the cruelest twist of all: Mortal Kombat continued to be sold at both chains.

Night Trap enjoyed a brief surge in popularity thanks to the proceedings, selling 50,000 copies the week after the congressional committee adjourned. However, as a result of those hearings, Sega had committed to forming the world’s first Videogame Rating Council to give games an age rating similar to movies. According to Sega vice president of marketing, Bill White, the continued controversy around Night Trap ‘prevented constructive dialogue about an industry-wide rating system’, and so in January 1994 Sega withdrew Night Trap from the market.

A little later, once the melodrama had died down, it was ported to the 3DO, Sega 32X, and early PCs, but by this point the game was forgotten almost entirely. That is until an idle programmer called Tyler Hogle, contracted by Digital Pictures to complete some port work, decided to dig the real gems out of their back catalogue. In 2016 footage of Hogle’s work porting Night Trap onto mobile devices appeared and ignited some flame in the hearts of those who vaguely remembered “The Game So Violent It Got Banned”.

Hogle collaborated with Zito to get a modern re-release, difficult thanks to the loss of original source code, and eventually finding the game’s master footage on 35mm in the hands of director James Riley. From just that, and replaying the 1992 original for the trap cues, Hogle pieced together the Night Trap 25th Anniversary Edition. The gameplay is faithful to the original, as in you miss basically the entire story while trying to trap Augers, and constantly get booted out of the system by S.C.A.T for not paying enough attention.

However Hogle has put in great touches that hint to the history of such an important game. As mentioned earlier, the documentary Dangerous Games is included in the game. As is the original VHS prototype Scene of the Crime which has never be seen outside of the defunct corridors of Axlon, and yours to play if you complete a perfect run – no easy feat!

And there are some neat quality of life inclusions, too. The small screen previews of each camera are actually animated rather than still images of the rooms, so you can spot Augers easier, and there’s a theater mode to watch through the story “as it was intended”, though really there’s no way to watch a multi-linear plot in one timeline.

Night Trap: 25th Anniversary Edition is a faithful recreation of an extremely mediocre, forgotten yet imperative part of gaming’s history. It’s amazing to see how far the industry has come in the time since, that under the successors of the ratings board that it birthed, Night Trap is only a T for Teen. Teen horror, all the way down.