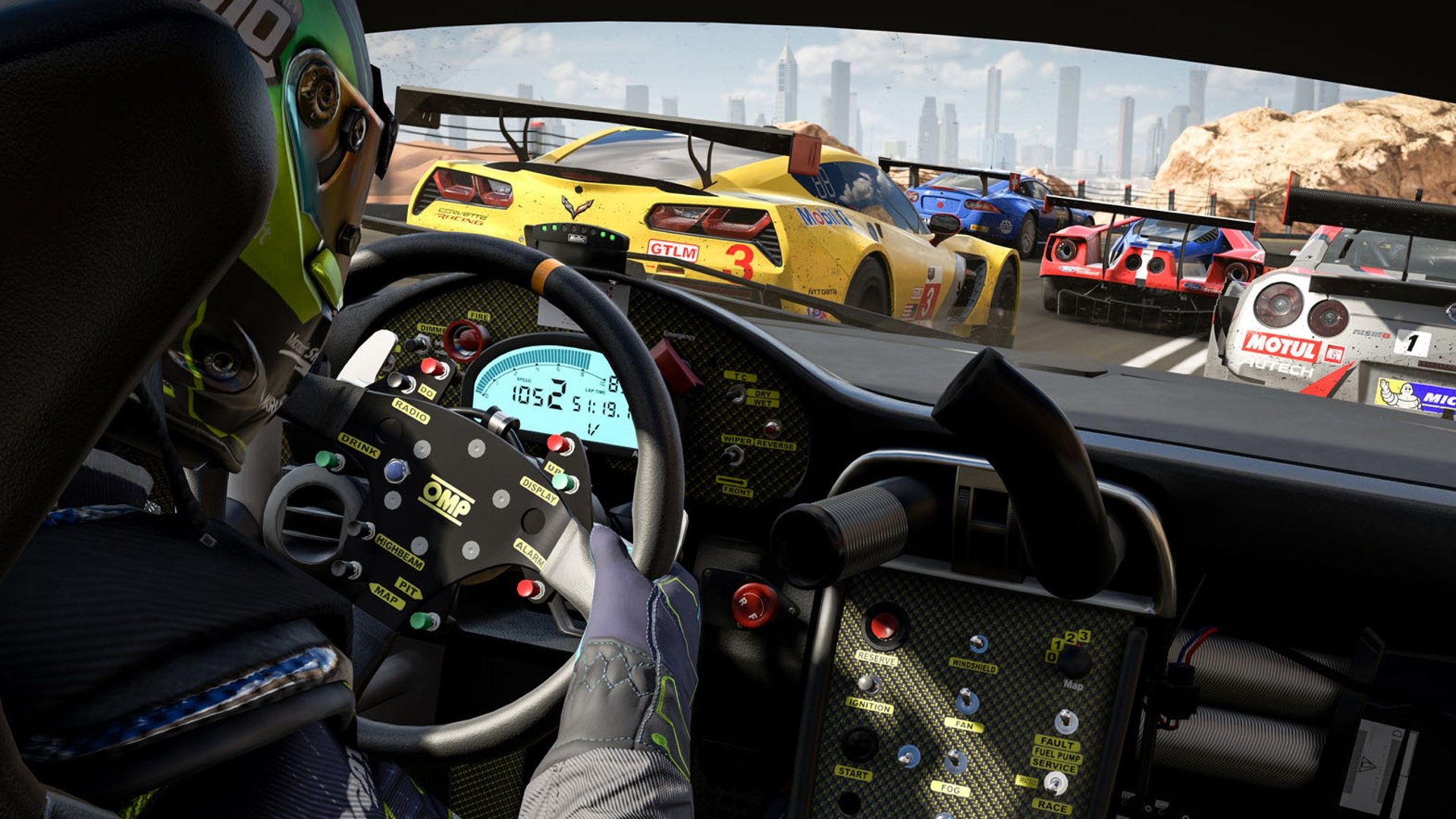 We're coming to Forza 7 a little late, which means many of our peers have already picked their way through Turn 10's latest and most extensive loveletter to motorsport, and there's a wonderful line in the Guardian's review, by former Edge magazine editor and noted racing game critic Joao Diniz Sanches, that we wanted to share before we got going.

"You can still trail brake a Ferrari 288 GTO into corners," Sanches writes, "balancing your Pirellis on the absolute edge of adhesion, make the apex and power out wide, a reassuring rumble from the curb sending that muscly 1980s Pininfarina bodywork on its way to conquer the next curve, and do so with every element of that process beautifully communicated via force feedback wheel or – key given the intended demographic – regular gamepad."

Sparkling prose, of course, but it's also helpful because it demonstrates that someone who truly loves cars as Sanches does – we doubt he needed to ask Cortana for help with the "Pininfarina" reference – is comfortably at home in Turn 10's latest. In contrast, we don't fall into that category – we enjoy motorsport, and have been to Brands Hatch and Silverstone a few times, but we couldn't name every driver on the F1 grid, and have no idea what's going on with touring cars, Nascar or Le Mans. Forza Motorsport 7 speaks to us every bit as urgently as it does to people with petrol in their veins, and the fact it speaks to us all with a clear voice is one of the reasons it's such a towering achievement.

We wanted to start with that, because the most tempting place to begin writing about Forza 7 was always going to be Prize Crates, and that would feel a little unfair. Yes, this is another in a growing line of triple-A games to embrace the loot box phenomenon, and where Turn 10 nails the apex on the track, it loses its grip somewhat in pursuit of this long-tail revenue.

Prize Crates should be something you can take or leave. They give you a chance to unlock cars, mods and cosmetics in exchange for big lumps of in-game currency. (Turn 10 has confirmed that you will be able to pay for them with real money one day as well.) But because of the way Prize Crates are plumbed into the game's progression systems, they end up being something you can't simply ignore. At some point you will need the XP-boosting mods they provide, and the game practically harasses you to take notice of them before you finally acquiesce and roll the dice on whatever's inside.

As we've written elsewhere, the problem isn't so much the crates themselves, but the fact they feel like a poor fit for the game onto which they've been grafted. Opening blind packs feels natural in games like FIFA Ultimate Team and Hearthstone, which have their roots in collectable cards, but motorsport is about the love of speed and precision engineering. There's no thematic link, so Turn 10's crates feel contrived. The fact Forza 7 has so much in common with Forza 6 doesn't help – the relative subtlety of the transition from one game to the other in every other respect merely emphasizes the clumsiness of their inclusion.

But enough about the crates. They are there, and as much as they feel out of place, they are the last thing you'll be thinking about as you turn onto lap 24 of a Spa-Francorchamps Endurance race inches ahead of your rivals. Nor will they feel all that pressing as you drag a racing truck around Yas Marina, or throw a hot hatch into the corkscrew at Laguna Seca.

Variety is one of Forza's best features, and in part thanks to heightened generosity of spirit seemingly inherited from sister series Forza Horizon, Forza 7 is Turn 10's deepest, broadest game to date, featuring over 700 cars and 32 racing locations in over 200 configurations. It's a testament to the developer's experience and ingenuity that the Forza Driver's Cup career mode manages to lead you through them all in a way that rarely feels like a grind. Over the course of the first championship alone (there are six in total), you'll need to get behind the wheel of hatchbacks, a 60s Mustang, the Audi R8 LMS, trophy trucks, supercars, a Ford Gymkhana Focus, Polaris ATVs, a 60s F1 car, and even a Cadillac XTS Limousine. It's eclectic – sometimes it feels a bit random – but the last thing you can say is that it's boring.

Progression isn't strictly linear either – the idea is that you cherry-pick events, earn credits and buy cars, and as your collection grows you will start to meet the entry requirements for more of the events within each championship. There doesn't seem to be any event that you absolutely have to enter, but there aren't really any weak links, either, so we imagine you'll get to them all in time. Even obscure stuff like Top Gear Limo Bowling and truck racing – a new addition for Forza 7 – are fun and feel right at home. Judging by the quality, the sheer wealth of content probably masks a cutting-room floor full of discarded ideas that didn't make the very high standard Turn 10 has hit with the Drivers Cup.

Collecting and tinkering with your cars remains a joy. Of course there are an insane number of cars in this game, and it must sound like a bit of a stretch to call it curation when there are more than 700, but there's a lot of love in every line and stitch of these machines, whether you're staring at a Ford Transit in racing trim or a Lamborghini Aventador. Forza 7 keeps them flowing thick and fast, and the old days of grinding through endless commuter cars to get your hands on something that can drive fast up a hill are long gone. We were driving a Porsche 918 Spyder within about 20 minutes of loading the game. The feel of the cars is always distinctive, too, with a huge range of assists that can be tailored up or down to match your skill level. (The game also suggests changing settings and opponent skill occasionally when it notices you doing too well or too badly.)

One concept that may or may not irritate you here is "homologation". In previous Forza games, you could tune a car all the way through the car class system until a Focus could outpace a Ferrari. You can still do that here, but homologation (certifying something against technical requirements) means that you won't be able to use it outside its designated performance class in the career mode, so for now the Ferraris are safe. We're not too bothered by this, but we know some Forza fans found it hard to take.

Turn 10's attention to detail is evident virtually everywhere else too. It almost goes without saying that this is one of the most beautiful representations of motorsport you'll ever commit to your hard disk. We're watching the Subaru BRZ Forza Edition rotating under garage lights on the TV behind our computer as we type, and the way light and shadow creep across its iridescent bodywork is lavish to the point of absurdity. Needless to say, every car hits this standard, with audio to match.

Like the cars, the tracks wear Turn 10's many years of extensively assembled research and fine tuning lightly, from the bright spring sky hanging over Spa's trackside woodlands to the sand sweeping across sections of the new Dubai course, and dynamic weather adds a new dimension to tight battles. We're still waiting for the time of day to change as we race, but we can forgive its absence considering what you do get.

All of this looks great on Xbox One, but it's going to take another step up once Xbox One X lands in November, and if you're lucky enough to own a 4K TV then you will struggle to find a better showcase for that hardware. (The PC version, available now, looks magnificent on similar equipment.) Turn 10 nails its usual commitment to the highest possible resolution and frame-rate, and while Forza 7 could conceivably look even better if the developer broke its vow to always hit a 60fps refresh rate, this still feels like the best balance.

There is still some room for improvement, of course. The "Drivatar" AI, which uses data uploaded to the cloud by other players to create distinct driving personalities to race against, still struggles to live up to the hype. If you told us this was just standard racing AI, we'd have no difficulty believing you, especially as it turned into us for the bazillionth time as we made for the apex. Online racing behavior isn't much better, as there's still no incentive for people not to barge into one another aggressively, although the rest of the online experience is immaculate (with Forzathon and Leagues still to come).

Plus, you know, the Prize Crates. We'd be super happy not to see them return.

Fortunately none of this takes the shine off an otherwise incredible game. Whether you're a Sunday driver, or the sort of person who spends Sundays waking up in a tent so you can watch hand-modified sedans drive around an airfield, Forza 7 should give you dozens of hours of pleasure. The Forza Motorsport series is sometimes easy to ignore amid the noise about first-person shooters – it's almost boringly fantastic at this stage – but once you strap in you'll quickly remember why Turn 10 is one of the undisputed success stories among Microsoft's mixed bag of first-party studios. Passion, experience and attention to detail have helped it turn Forza into the natural successor to the increasingly erratic Gran Turismo, and despite a couple of missteps, Forza Motorsport 7 wears that crown with ease.