Fortnite - How to Find Treasure Chests and Safes

Follow these tips for finding valuable loot containers in Fortnite. 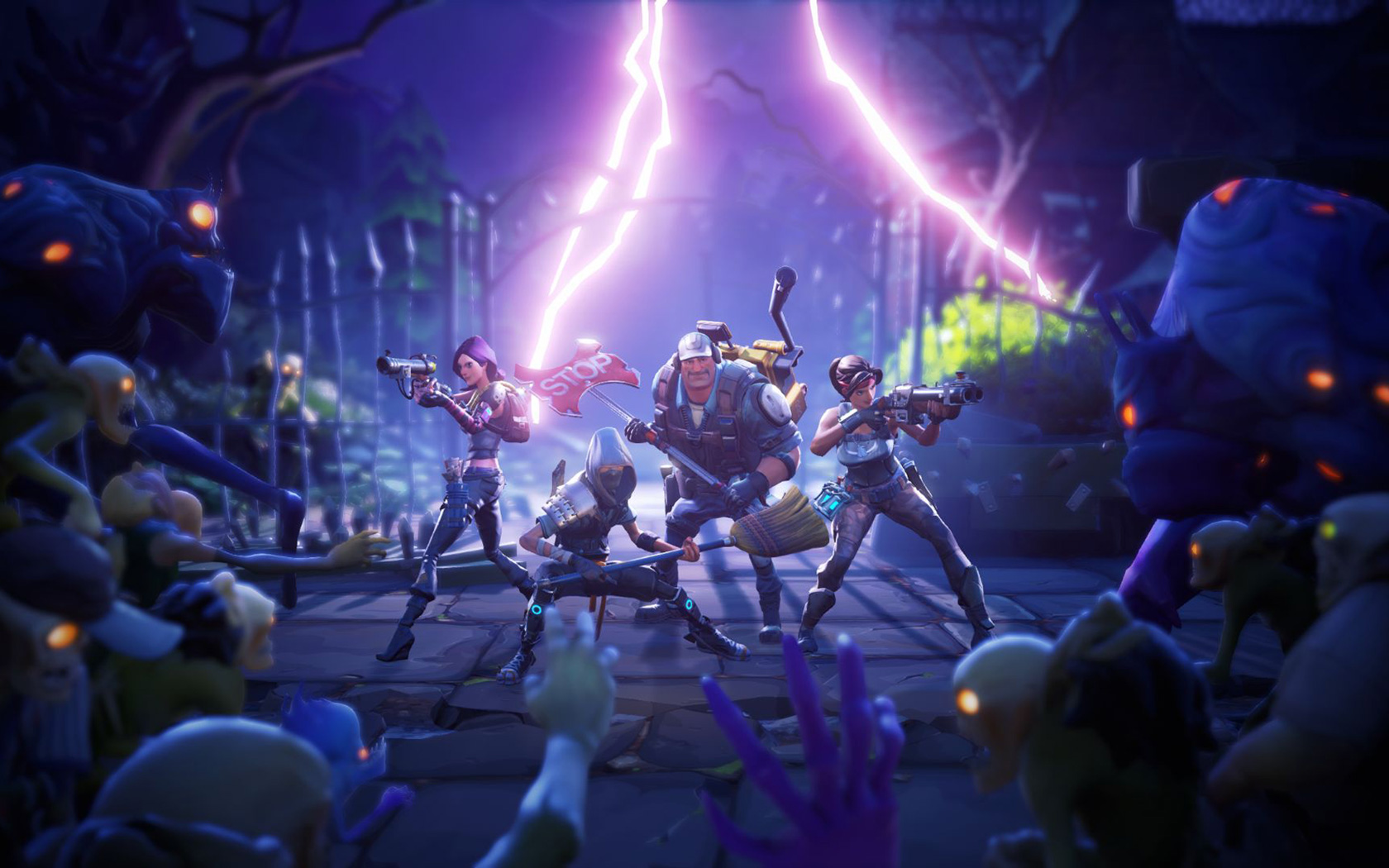 Fortnite - How to Find Treasure Chests and Safes

Follow these tips for finding valuable loot containers in Fortnite.

Epic Games first introduced their co-op action survival game, Fortnite, back in 2011 at the Spike Video Game Awards. Since then, Fortnite’s development team has been working hard to get the game where they want it to be, and it seems that time is finally here.

Fortnite launched into Early Access today for PlayStation 4, Xbox One, PC and Mac. We were fortunate enough to have a chat with Fortnite’s Creative Director, Darren Sugg, to discuss the game and get his perspective on the development process.

Indie Obscura: Thanks for taking the time to talk with us about Fortnite, Darren! Tell us a bit about yourself and your role on the Fortnite team.

Darren Sugg: I’m the Creative Director on Fortnite!  I jokingly say I herd cats, but in reality I work with a team of creative badasses to shape and mold the gameplay and world of Fortnite.

Not only are you the Creative Director, but you’re a gamer as well. What sort of games do you enjoy, and are there any that you’re currently playing besides Fortnite?

DS: Honestly? I haven’t played a ton of games in the last few weeks, as I’ve been living the Fortnite dream. However, I’m looking forward to checking out Kingsway.

I, for one, am super stoked to dive into Fortnite. But for those who may be unfamiliar with Fortnite, can you give us a quick intro to the game?

DS: Fortnite is a cooperative action building game, where players loot, craft, and defend forts against hordes of creatures all in a procedurally generated world.  In short, make Weapons, make Forts and make Friends.

Weapons, forts, and friends. Sounds like a recipe for a great game! Now, Fortnite was first revealed way back in 2011, so needless to say, it’s been a long time coming. Were there challenges that slowed down the development process? Or did the game undergo a major change?

DS:  Fortnite was Epic’s first in a few categories.  It was the first Unreal Engine 4 game, and it was also Epic’s first foray into creating an online service style game.  It turns out building all of that takes some time.

As far as the game changing?  Definitely.  Once upon a time, each of the worlds was owned by a single player, and that meant that if you didn’t adventure together, and a new person joined your game after you were 20 hours in, you wouldn’t have any stuff.  Instead, now we host everything on Epic servers, and as a result all your gear and advancement is based on your account and can go anywhere.

Fortnite has the feel of a tower defense game, but with more creative freedom. What sort of games does Fortnite draw inspiration from?

DS: I think it’s an amalgam of genres more so than any one game at this point.  It’s a third person action RPG smashed together with cool crafting games, all with a robust building system you can use in a firefight.

What sets the game apart from others, and are there particular aspects of Fortnite that you and your team are particularly proud of?

DS: Building, definitely building. It really glues the whole game together, and it’s pretty easy to learn how to do the basics while still providing tons of flexibility.

Building is certainly an important aspect of Fortnite, and blueprints are by far the coolest part of the building process, at least in my opinion. The blueprints let you swap between different types of walls, roofs, etc. while allowing players to make adjustments on the fly. How did your team come up with this idea, and was it difficult to implement in the game?

DS: A few years back, we had a pair of really talented guys who created our modern building system.  They just iterated and made it better every day. They probably did it in a week, too… I can’t quite remember. They kept saying they wanted to go back and make it way better, but I made them go build the rest of the game.

Well they did a great job! The building/editing mechanic works really well in such an action-oriented game. Players need to scavenge for blueprints, right? Are there schematics that are already available to the player?  What other loot can players find?

DS:  Players acquire schematics as quest rewards and from our Llama Piñatas (our card packs). You do get a few schematics from the starting quests, so you don’t have to start from nothing.  As for how much loot?  Tons. Guns, Melee Weapons, Rocket Launchers, Traps, Healing Posts… and more.

Who put all that bacon in the toilets?

Since Fortnite is a cooperative game, are there ways to share schematics with friends or trade weapons with other players?

DS: You can totally trade weapons. We don’t use any level requirements, so that means players can easily swap weapons back and forth.

The crafting system in Fortnite allows players to create some really interesting and strange weapons. What’s the weirdest weapon players can craft or find in Fortnite?

DS: The Antler axe is kind of weird, right?  Perhaps the Stop-Axe, which is made from a real stop sign? Or maybe it’s our desire to have laser guns that bounce across walls.

Gathering resources is a key component of being able to craft and build in Fortnite. Do players keep items and resources they’ve collected between missions?

DS:  Sure do.  Your inventory stays with you no matter where you explore.

So instead of zombies, you guys have monsters called Husks that come in different shapes and sizes. Tell us more about them.

DS:  We have two big classes of creatures. There’s the Husks, which include Lobbers, Husks, Mini, Propane, and Pitchers. Then we have the Mist Monsters: Smashers, Takers, Flingers, and Trolls.

I’ll leave some to the imagination, but I’ll pick two. The Taker has the ability to create portals through your walls and get inside where you least expect them.  The Propane Tank husk carries a tank and if you let him get too close, he’ll throw it into traps and blow them all to pieces.

If a Husk destroys part of your fortress, is it better to repair the damage, or just rebuild?

DS:  Depends on where it is.  Repairing is pretty simple, so I generally like to repair stuff, but I’m also pretty thoughtful as to where I build things.

Lobber Husks always gave me grief, because they know exactly where all the weak spots are on my fort and they can just drop in from the top. I usually try to focus on eliminating Lobbers as soon as they appear, but are there other Husks that pose a higher threat?

DS:  Well in addition to the Propane Tank husks, the Flingers can cause a lot of problems, as they literally fling other monsters on top of your fort so they can burrow down into it from above.

Players can also place traps outside their fortress to keep the Husks at bay. What types of traps are there, and do you have any go-to traps that you always use?

DS:  Spikes, Electric, Gas Traps, Flash traps and a few others. Go to? I like jump pads. Strange, right?  But they let me get around my Storm Shield.

Let’s change gears and talk about characters. There’s several types of playable characters in Fortnite, and each have their own role and unique play style. Which character is the most useful, and is there one that you prefer to play as?

DS:  We have four classes: Ninja, Outlander, Constructor and Soldier. Our heroes are all one of those types of classes, and let me tell you they are all useful for the teams.  It’s just about playing to their strengths. For example, the Ninja needs to stay on the move. If he hangs out in one spot or tries to engage Bee-Hive husks in melee combat, he can get himself into trouble.

A lot of gamers who play construction-based games really enjoy being able to create big structures and impressive builds with their friends. Is this possible in Fortnite? Do players have a creative space they can return to and show off their creations?

DS: Well the Storm Shield is a place where players can create big forts and defend them.  I’ve seen quite a few and they can be damn impressive.

I had the chance to go hands-on with Fortnite during a Storm Chaser event back in 2014, where I feel a lot of fans got acquainted with the Fortnite alpha for the first time. What sort of major changes has the game undergone over the last couple years?

DS:  Aside from true world saving? Tons of stuff, so much it’s hard for me to remember.  We have a lot more mission types than we did back then. Did I mention we have a mission where you lay tracks and have to defend a moving ammo cart?

Like a live-building escort mission? Neat! Can’t wait to give it a go when I hop onto Fortnite tonight. Now, I play on PC, but Fortnite is available on PS4 and Xbox One as well. How will new systems like the Xbox One X and PS4 Pro affect Fortnite? The game already looks gorgeous, but I imagine these new consoles will make it look even better.

DS: Yeah, these new editions of the console enable Fortnite to run features you usually only get on high end PCs, and it’s pretty awesome.

Epic is also working on Paragon, which supports crossplay. Will Fortnite support crossplay as well?

DS:  We support Cross-Progression between PC and PS4, which means you can link your accounts together and move back and forth freely between the platforms.

With Fortnite going into Early Access, I’m sure things have been crazy around the office. What sort of things do you have to do to prepare for a game’s launch?

Hah! Stay calm, and build on, I suppose. Thanks for chatting with us Darren!

Fortnite is now out in Early Access on PS4, Xbox One, and PC/Mac. Although Fortnite is scheduled to launch as a free-to-play title sometime in 2018, players will need to purchase a Starter Pack to participate in Fortnite’s Early Access phase. Check back here for more Fortnite guides, news, and updates!