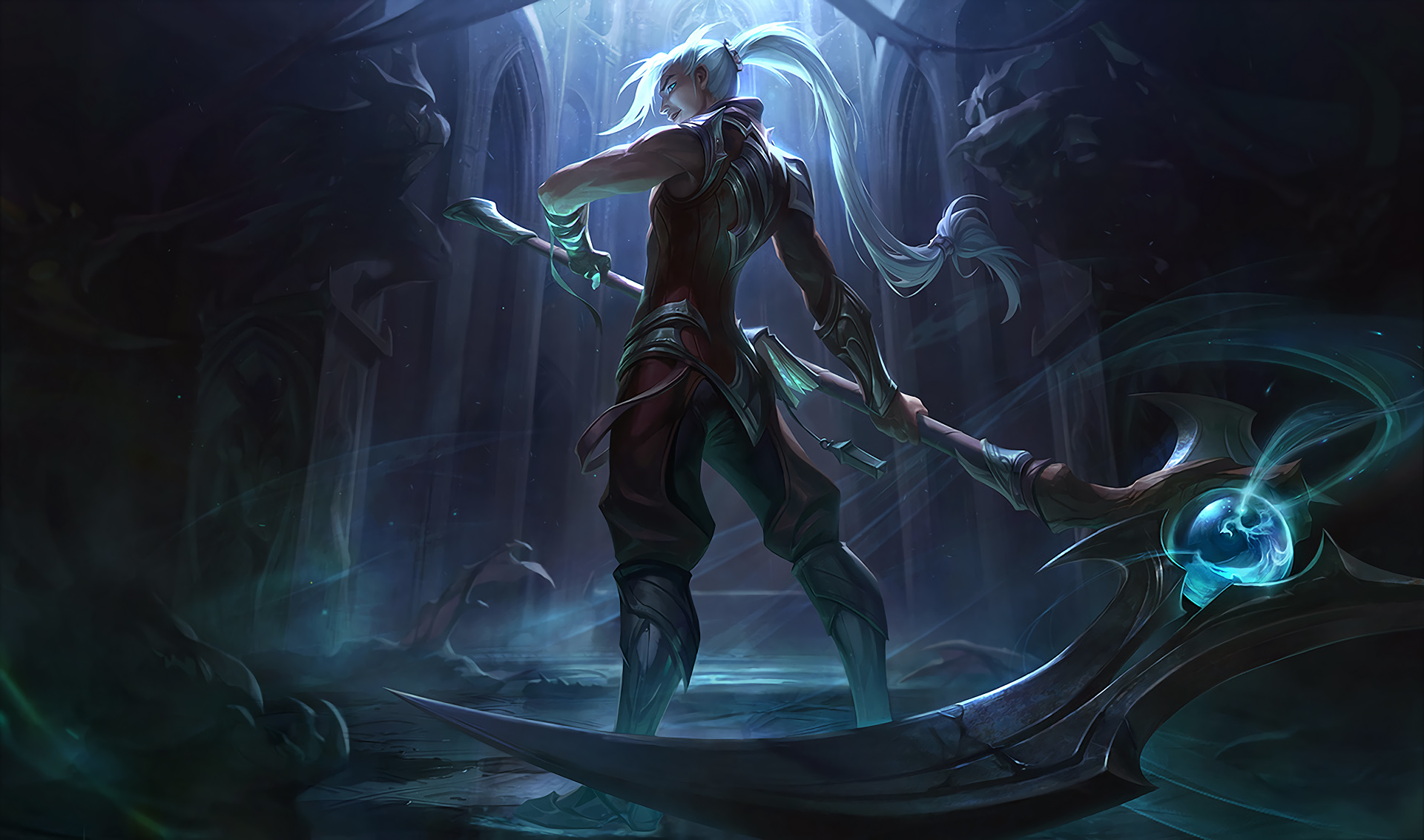 Harness the power of the big scuttler lest you return to the void.

Kayn is a peerless practitioner of lethal shadow magic who can use the playstyle of an assassin or skirmisher depending on which form he takes. Mastering and understanding Kayn will help increase your chances of grabbing your team a win at City Champs, where you can represent your city in live matches against rivals from around the country. So how can you use Kayn to win at City Champs?

Kayn is one of the few junglers (like Kha'Zix) who can change his abilities based on his current form. As a Shadow Assassin, Kayn’s abilities deal incredible burst damage with added range, while his mobility is increased. In this form Kayn can chase down even the most mobile champs with Shadow Step and silence them with his malevolent scythe.

In his Skirmisher form, Rhaast takes control of Kayn and he trades his mobility and damage from his assassin form to gain healing, max health damage and utility. His Umbral Trespass: Rhaast offers powerful max health damage and a huge amount of self-healing, which is designed to keep him healthy in lengthy teamfights and engages.

Meanwhile, his Blade’s Reach: Rhaast gives him some added utility in the form of a one-second knock-up. Kayn’s Rhaast form gives him the survivability to unleash his lethal shadow magic in times where his assassin form would simply be obliterated.

Kayn's the only champ in League who can change his class in the middle of a game, so if the other team's squishy ranged champs are proving troublesome, he can focus on attacking them to become the Shadow Assassin.

If Kayn's team needs a tankier frontline, Rhaast can provide the utility for the job by attacking melee champs. However, no matter which form wins, you can simply wait a few minutes longer and choose the form you want. Overall, both forms have obvious strengths and weaknesses and knowing when to switch between the two will allow you to counter and adapt to various playstyles.

You will start the game in Kayn’s natural form and this is the form in which you'll be spending most of your early-game. For the first few levels make sure you gank targets depending on what form you wish to take on. When you plan out your ganks as Kayn, think about how you can use Shadow Step to invent creative jungling routes and surprise your enemy.

Shadow Step offers completely unique pathing routes and the ability to freely move through the Rift's various obstacles, offering huge strategic depth and potential. This ability isn’t just great at catching laners with their pants down—it also allows you to deny your enemies game-changing buffs without having to flash over walls to engage and steal.

Learning to use Shadow Step is extremely important if you wish to make nightmarish plays at City Champs.

Kayn's two evolved forms have their own unique trade-offs. The Darkin has telegraphed crowd control and limited access to enemy backlines, while the Shadow Assassin has very limited sustain damage and no hard crowd control. Check your enemies’ team comp, then choose wisely, as taking too long to transform means you'll fall behind in the mid-game.

Regardless of which form you gain access to first, think about which of Kayn’s transformations will benefit your team the most in the mid to late-game. If the enemy team has a lot of squishy carries, be sure to go assassin and use Kayn’s Blade Reach and Shadow Step to burst and chase your targets.

However, if they have tanky bruisers and your team lacks CC, consider choosing Kayn’s Rhaast form to cut through their health with his maximum health damage from Reaping Slash and Umbral Trespass. The Shadow Assassin excels at flanking and picking off high-priority targets by using Blade’s Reach to engage, while Reaping Slash allows you to dive into the action.

You can then dodge enemy attacks and ultimates by using Umbral Trespass to go inside them before finishing them off with Darkin Scythe. Meanwhile, in his skirmisher form Kayn becomes extremely strong against assassins thanks to Rhaast’s built-in sustain and CC abilities. If you’re on the brink of death, be sure to use Umbral Trespass to avoid further damage and heal 70% of the mitigated damage.

You can then knock up your pursuer with Blade’s Reach and flee to the safety of your team with Shadow Step. If you can master both of Kayn’s forms, you’ll be able to carry your team to victory and have a shot at the City Champs title.

Make sure you head over to the Super League LoL events page to purchase your ticket and take part in the online qualifiers. City Champs can be enjoyed by all skill levels as you will be placed in one of the four tiers based on your personal solo queue ranking.

However, only the top players will have a chance to represent their city. Even if you don’t make the cut, you’ll be able to play Challenge Matches as a reinforcement to help earn points for your city. If you think you have what it takes to rise through the ranks and wish to test your skills with Kayn make sure you sign up for City Champs today.