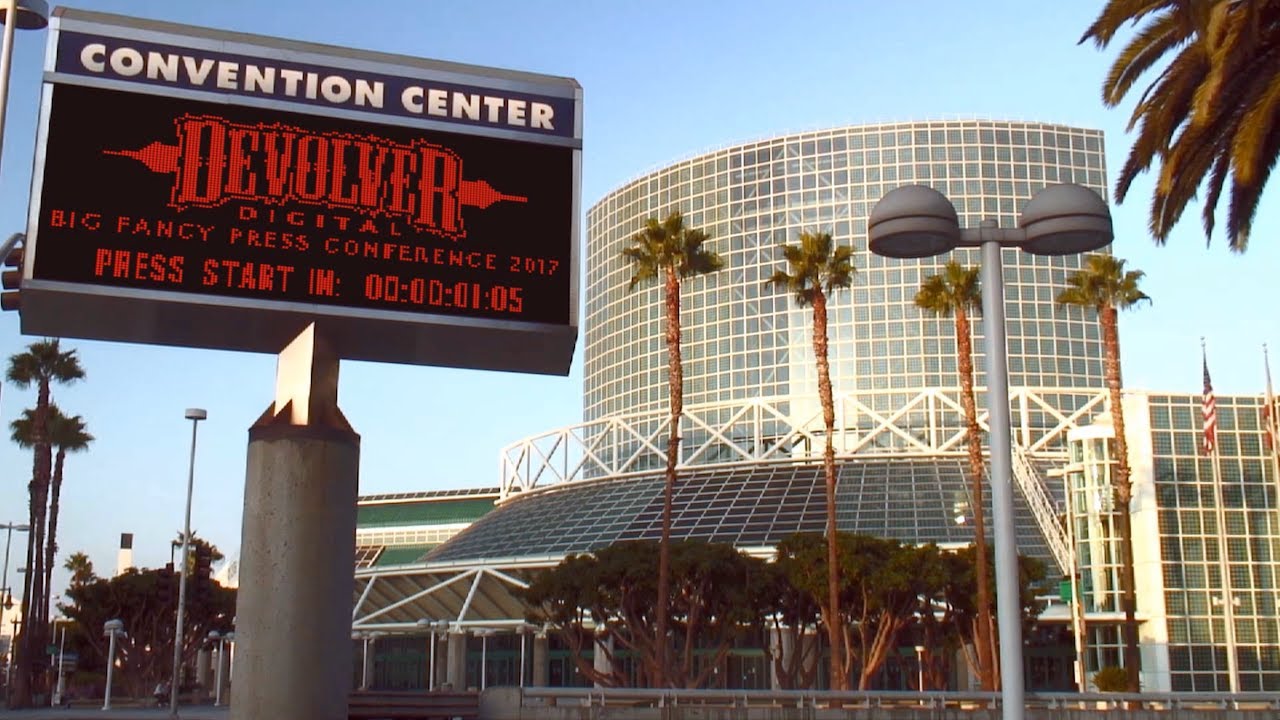 Each year, the gaming industry directs their focus over to the Electronic Entertainment Expo (E3) to check out the latest and greatest announcements. In a battle where corporate bigwigs fight to outdo each other’s grandiose press conferences, one company decided to things a bit differently… Devolver Digital.

During last year's E3 event, we were lucky enough to kick back with the Devolver gang at their parking lot BBQ. It was an eye-opening experience, one that felt like a breath of fresh air after stumbling over from the exhausting and chaotic E3 show floor.

While big gaming companies can often come across as sterile and dry, Devolver Digital is like your drinking buddy who’s always throwing the wildest parties. Nothing demonstrates this attitude more than Devolver’s new approach to E3 with their “big fancy press conference 2017.”

Right from the start, Devolver’s press conference takes shots at E3 quirks like the over-enthusiastic crowd, with host Nina Struthers mumbling the words, “You are professional journalists…” before shooting a gun up into the ceiling. Touché, Nina.

Jokes aside, Devolver did manage to sprinkle in some serious gaming footage. Back in February, developer Reikon Games and publisher Devolver Digital shared a dark, new trailer for their upcoming game, Ruiner.

This trailer was shown once more during the Devolver press conference, giving players a second glimpse of Ruiner’s exciting gameplay backed by the thumping thumping track, Sleep Paralysis by Sidewalks and Skeletons.

Overall, we can't help but feel intrigued by the brutal, futuristic action and dystopian imagery (with face masks straight out of the System of a Down video for BYOB) on display in Ruiner.

While there’s currently no set release date for Ruiner, you can add the game to your wishlist on Steam, and check out the game’s official website for more information.

Devolver Digital followed the Ruiner trailer with an interesting and quite literal take on “throwing money at the screen.” Dubbed as Devolver Digital’s “Screen Pay” feature, gamers are treated to a look at what it’d be like to actually throw money through your computer monitor.

Unfortunately, things get a bit gruesome when the computer wordlessly demands a blood sacrifice and rips off the hand of the horrified volunteer decked out in Devolver garb.

Then, as though nothing has happened, another trailer is shown. Unlike the trailer for Ruiner, Serious Sam’s Bogus Detour is there to buoy Devolver’s next announcement.

After subtly (and not so subtly) encouraging you to “buy the motherfucking game,” Devolver proceeds to take a few jabs at Early Access titles with the introduction of “Earliest Access.”

This was one of our favorite quips during Devolver’s press conference. Not only was it spot-on, we also get to hear Nina Struthers describe it as a new, revolutionary way to “hastily rush unfinished game content out to consumers.” This goes without saying, but we’re big fans of Nina.

Next, Devolver showed an entertaining clip where Suda51 is confused as to who Devolver Digital is and why he’s being filmed. As Devolver’s press conference begins to wrap up, one final feature is announced… Devolver Comment Created Content.

This joke rips apart player feedback, and presents the interesting question of what would happen if developers took player complaints seriously and actually incorporated them into their games.

As Nina Struthers powerfully backs the latest reveal, blood begins to pour from her nose. And, in an ode to the film Scanners, Nina’s head finally explodes. RIP Nina, you were our fave.

If you want to check out the 15-minute “big fancy press conference 2017” for yourself, or rewatch it a few more times, head over to Devolver Digital’s YouTube channel.

What did you think of Devolver’s press conference? Let us know in the comments below!