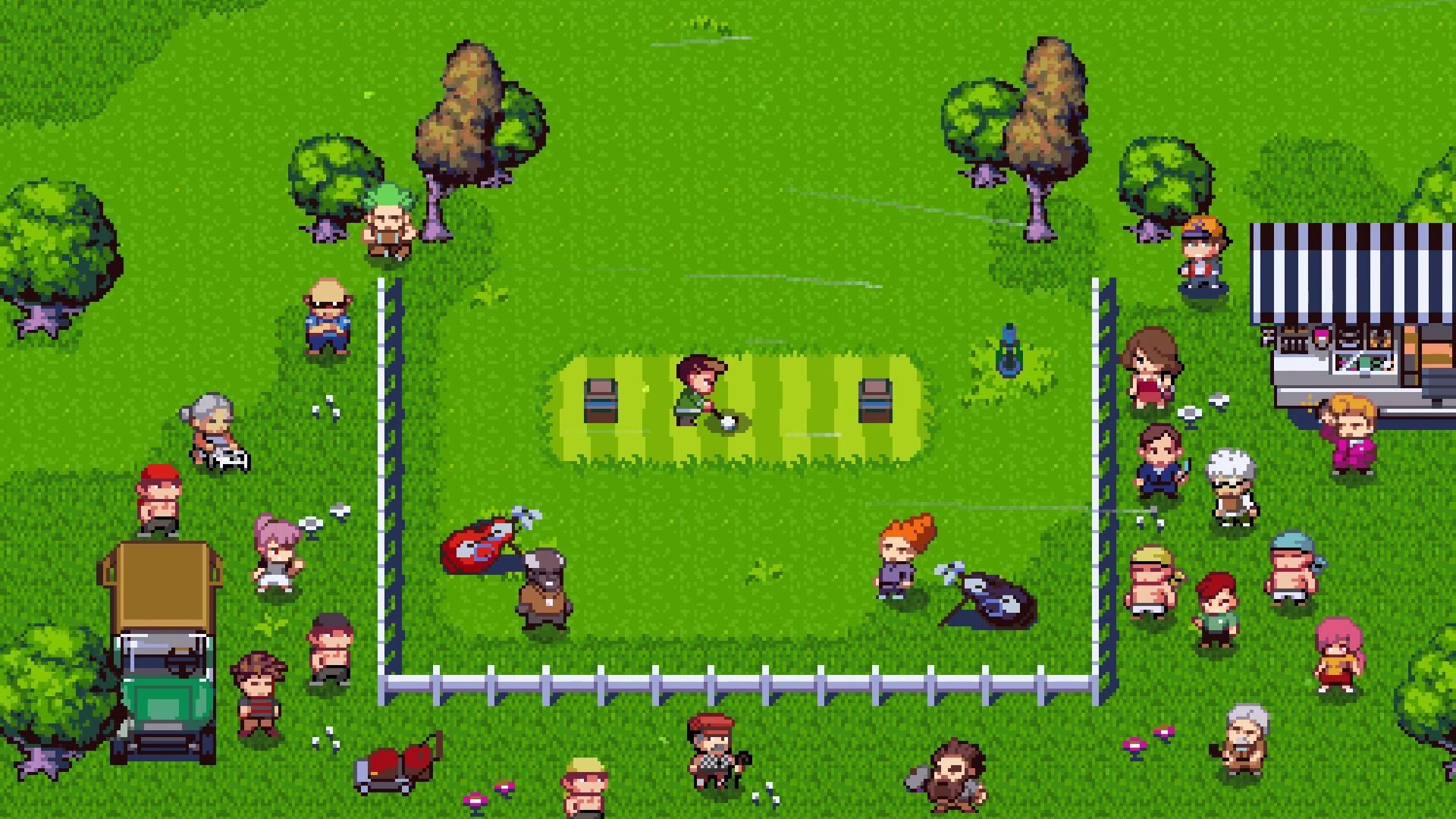 There was a time when golf games were becoming ten-a-penny. Almost as many established gaming franchises and endorsing celebrities developed spinoffs that it risked becoming the new kart genre of games. Recently there have been fewer and not since the Game Boy Advance has a 2D golf game even dared to exist. Golf Story doesn’t just dare to play the beautiful game top down, it makes it take a backseat for the plot to ride shotgun with comedy. It’s a hell of a ride.

The story half of this two-sided coin involves you, a youngish adult, abandoning all of your adultlike responsibilities to pursue your childhood dream of making it onto the pro tour. The tutorial of your childhood gives you the basics of how to aim and hit balls, but also lays the groundwork of a relationship with your dad, your number one fan and best caddy.

The interim years are a mystery when you begin the game proper, including the role geese had to play in whatever caused your hiatus from golf, and how your dad fits into your decision to begin your quest anew. Quest is the right word for your pro tour ambitions, because Golf Story sets everything out like the RPGs of yore.

On the gameplay side, there is XP to earn, stats to apply points to every level up and money to win from completing jobs, errands and tournaments. Almost everything in the game uses your golfing expertise to solve, from returning eggs to angry birds to feeding fish. This is a game that recontextualizes the mechanics of golf for whatever it wants, and sometimes subverts it for laughs.

It’s extremely rare for sports games to express the self-awareness necessary to pull off comedy while still keeping the tension that makes playing feel great. Golf Story will have you yelling at your Switch, urging the ball to roll a few inches further to drop for a birdie, and then immediately rolling on the floor at the post-match banter.

Characters all have their little quirks, hugely aided by some really nicely animated speech bubbles – exploding to fill the screen in an angry tirade, or slowly filling letter by letter with a sad diagonal droop at the end when characters are upset. Clearly the developers are Australian, given to quick remarks of “Shot, mate!” from bystanding bogans in string vests and bandanas. And the witty banter is matched up by some great physical comedy too, it’s no Caddyshack but it’s definitely a long drive better than Happy Gilmore.

The world these people inhabit has its own charms, too, all carved up into themed courses for you to chip away in. Each comes with its own set of challenges to get you accustomed to their specific environments before you’re able to go on a full course. It reminds me of how old RPGs would introduce you to a new town or area, unlocked by obtaining an item from the boss of the last one. And then before entering this new mountain or valley’s dungeon, all the village people have little tasks to help you get what you need to take on what awaits.

This plays out almost hit-for-hit when you begin earning special upgrades from coaches and other characters who see that you have what it takes to go pro (after spending a few hours criticizing your “unique” but effective swing in their own way). Get a new power, unlock a new course, learn about a better way to get the ball to go where you want. It’s all a smooth curve of progression on a natural and fun path.

It helps that the golf itself is extremely gratifying to play. There’s been no need to improve the three-tap power and accuracy system invented decades before on Nintendo’s own consoles. Choosing a point on the ball to add spin and adjust trajectory, and then letting rip with a perfect powershot that adds rainbow trails and a satisfying “thwack!” to your swing. It’s all made that little bit extra involving with great use of the Switch’s HD rumble feature, to feel the bounce of the ball as it plonks into the cup.

The sounds are all very pleasing, the music too, but nothing to write home about here. The soundtrack for each course evokes exactly what it needs to get across the theme, and never crosses the line into tiresome or annoying. But I’m not anxiously waiting for a vinyl release, like some recent retro hits like Stardew Valley or Undertale. The songs are all suitable shorthand for a charming, relaxing time, and that’s exactly the job they have. The real meat is in the golf, and the story. And they’re both brilliant.