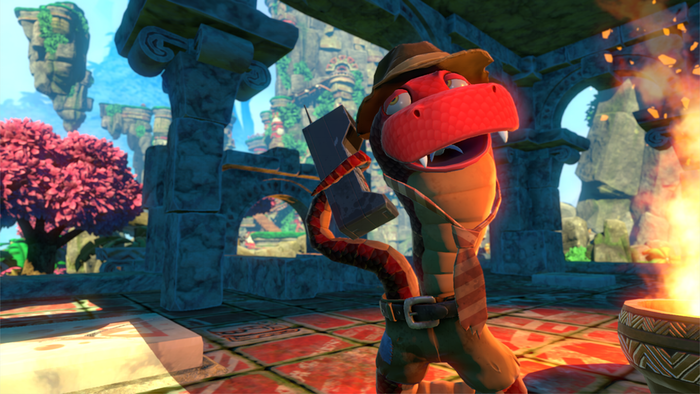 Yooka-Laylee: How to Free the Pagie in Hivory Towers

Upon arrival to Towers in Yooka-Laylee, you’ll find a trapped in a cage. We’re sure you may have tried just about everything possible to set this little one free but unfortunately, you won’t be able to until you unlock a certain special move called Slurp Shot. Below, we've put together a quick guide on how you can free the  in a  inside of  Towers in Yooka-Laylee.

You’ll soon find out that in Yooka-Laylee many of the puzzles require specific special moves in order to solve them. One of those special moves is Slurp Shot, which gives Yooka the ability to eat the glowing Scorchberries and Frostberries you’ll see scattered throughout the worlds they explore. Slurping up one of these flower’s petals will give Yooka the ability to shoot projectiles of that particular element.

In order to get this move, you’ll need to collect 30 Quills and this should come easy as there are 300 Quills in each world of Yooka-Laylee. Once you’ve done this, look for on the second floor of Duke's Temple. He'll be hanging out around a pillar selling marked down moves.

If you’re having a problem finding him, listen for the ring of his cell phone which usually goes off whenever he’s around. Purchase the Slurp Shot move from him and make your way back to the original spawn point at Towers where you found the caged Pagie.

Once you’ve returned to Towers and located the that awaits their freedom, examine the space around you. You’ll see Scorchberries and some torches with letters on top of them placed conveniently nearby.

Walk over to the Scorchberries and use Slurp Shot to eat one of them. Now, use your newfound firepower to light the torches in an order that spells out the word "." An easy way to do this is by using the left analog stick on your controller to aim where Yooka shoots the fire. You may need to jump as well.

Once you’ve successfully lit all the torches in the right order, the cage will open and you’ll be able to finally obtain the .

For more on Yooka-Laylee, check out where to find all the treasure chests in Shipwreck Creek, find the locations of all the Play Coins, and uncover all the locations for pirate treasure.

By reading through this guide, you should now know how to free the  in a trapped within the Towers level of Yooka-Laylee.