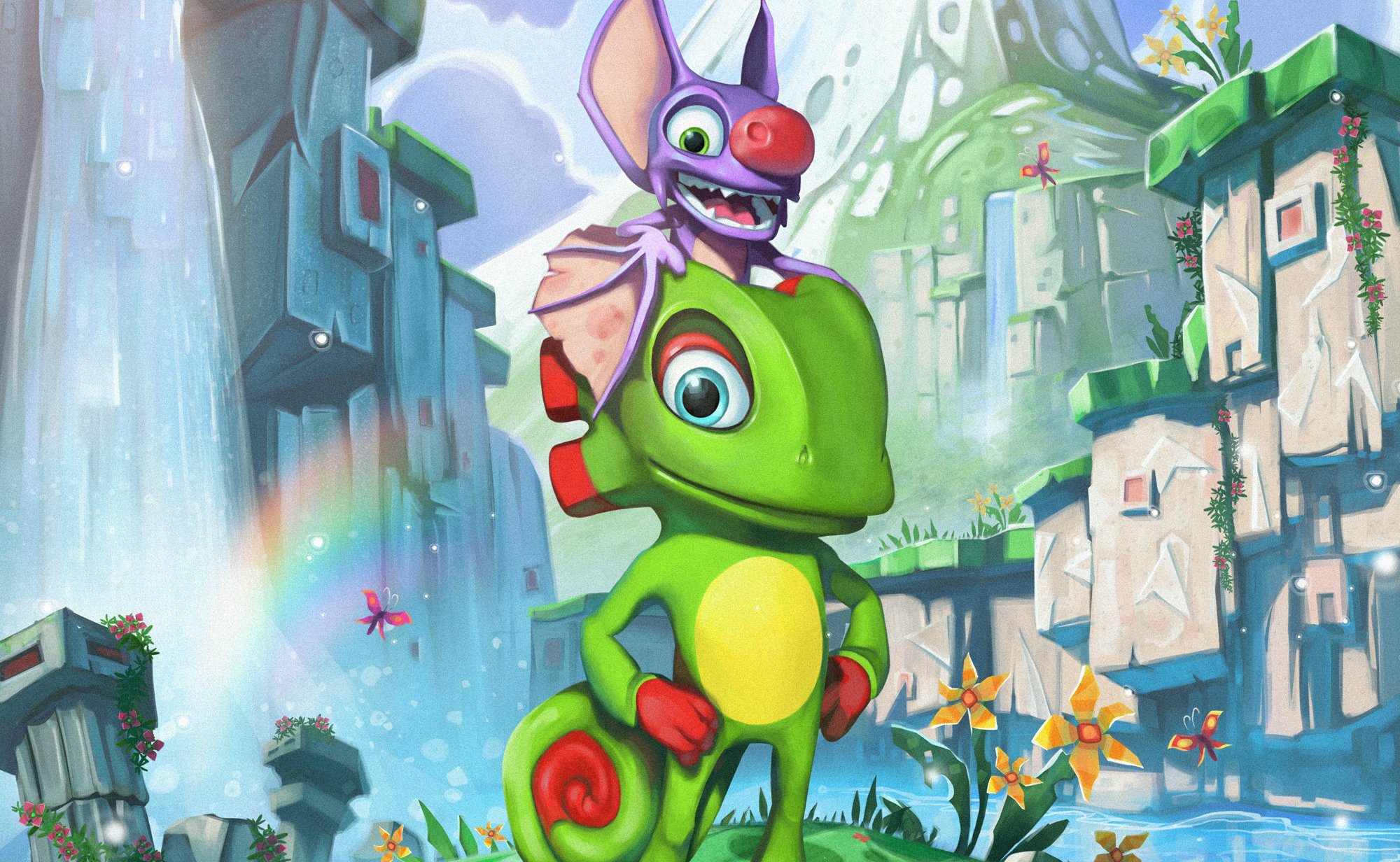 Review: Dream of the 90s is Alive in Yooka-Laylee

Growing up, I played all of the RARE games from Banjo-Kazooie to Donkey Kong Country. I wasn’t particularly great at them, but I was able to enjoy myself thanks to their approachability.

They harbored a unique style that truly stood out, even among other platformers. When I first launched Yooka-Laylee, I could feel the waves of nostalgia washing over me, taking me back to the days spent sitting cross-legged on the living room floor in front of my SNES.

This game truly is a spiritual successor to the Rareware games of my childhood. Which is primarily good, but can be bad in certain ways as well. Before I wax poetic about the game, I do have to make it clear that Yooka-Laylee feels a lot like Banjo-Kazooie.

If you were expecting a completely new IP, you may find yourself disappointed. Yooka-Laylee is essentially a RARE game for RARE fans, and as such, it’s filled with quirky references and callbacks. However, there are several nice modern touches thrown in, like the wayward Shovel Knight.

As long as you walk in knowing the game’s lengthy origin story, you’ll have no trouble enjoying the colorful realm of Yooka-Laylee.

Between protagonists Yooka and Laylee, Laylee the bat feels far more developed and fun. Part of me actually wishes the roles were reversed and I could play as Laylee rather than Yooka. Or trade off between the two every now and then. Apologies, Yooka!

Nevertheless, I still enjoyed the banter between responsible Yooka and devious Laylee. They play off each other nicely, and even the character design of Yooka and Laylee works well. After all, it’s absolutely adorable to see a bat draped across a chameleon's head.

In the antagonist corner, we have the devious Capital B. Capital B is a strange villain in that you never really get to know him. I feel like I spent most of the time snatching up  and Quills, rather than worrying about enemies or Capital B's greed coming back to haunt me.

Either way, he's not getting my , I worked too damn hard to hand them over to a narcissistic bee!

Each character feels unique, all with their own voice effects. While these voices are also very much Banjo-Kazooie-, I did find myself a bit annoyed at their persistence about midway through. Then again, I had the same complaint about Banjo-Kazooie so I can't really hate on it too much.

Plus, I really didn’t want to mute anything because the background music via Grant Kirkhope, David Wise, and Steve Burke is one of my favorite aspects of Yooka-Laylee (aside from the game's mechanics). Well, except this track. I thought we agreed to never mention the DK Rap ever again?!

Yooka-Laylee is a game I enjoyed for several different reasons. Of course, the nostalgia factor is right at the top of the list, as my childhood was defined by games like Banjo-Kazooie and Donkey Kong Country. Aside from the “feels” the game gives me, though, I also think it’s a solid way to spend an afternoon.

It’s a game that knows its audience and never tries to hide this fact. From the Snake (naughty, naughty Playtonic) that holds an 80’s cell phone to the retro dinosaur that reminisces about the old days, Yooka-Laylee is a quaint little time machine. I can get lost in, get frustrated with, leave, come back, repeat, and so on.

From start to finish, Yooka-Laylee never loses its charm.

It’s not perfect, yet I wouldn’t really want it to be. It’s not the polish of the game that matters here, it’s how fun it is, and how it makes you feel. In that, I have only the highest of praise to give Yooka-Laylee. I couldn't help but smile the whole way through.

Yooka-Laylee is like paying a visit to an old friend, sitting down on the couch, and chatting about all the misadventures you had back in the day.