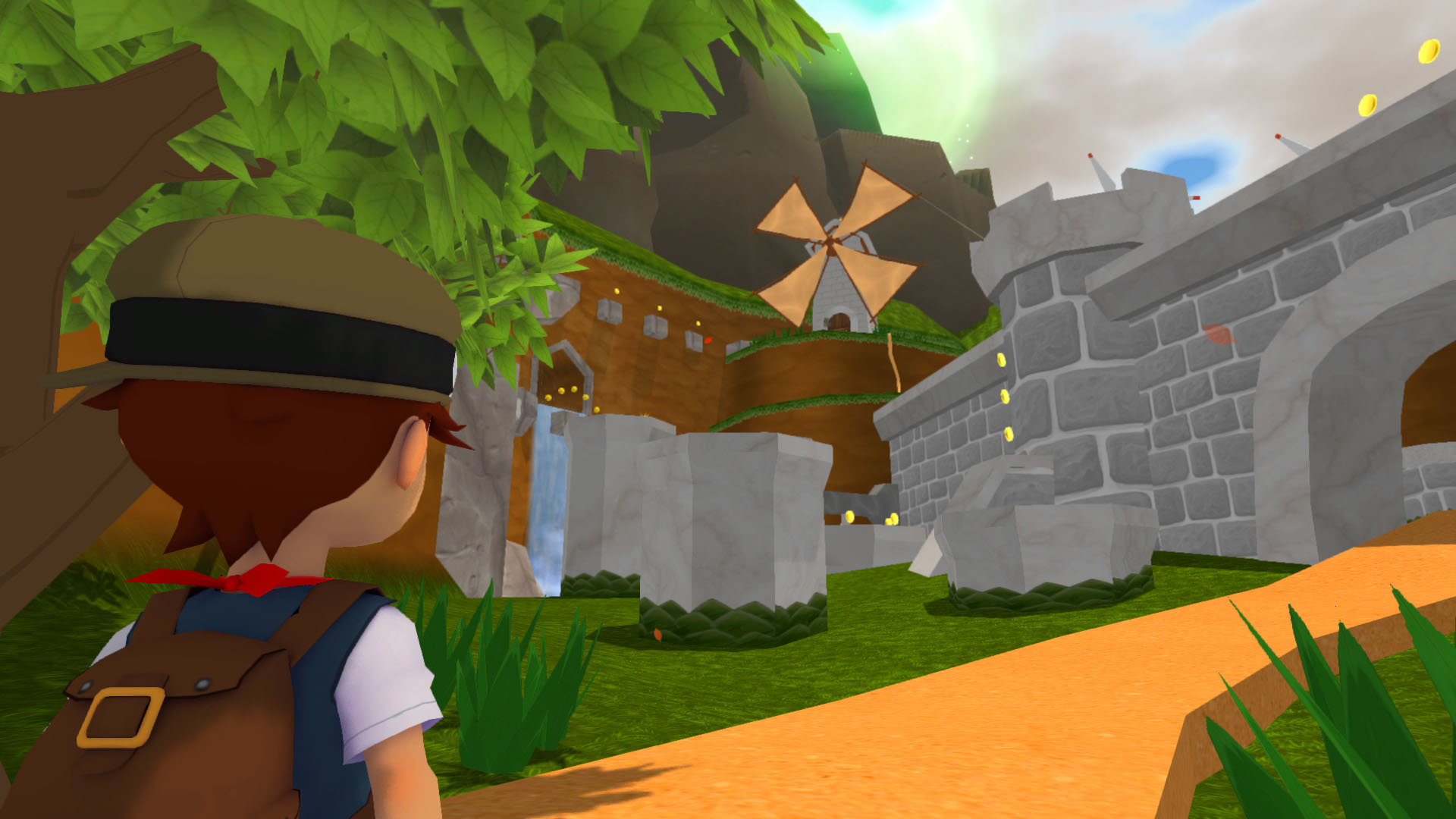 PolyKid’s new Kickstarter-funded indie, Poi, is a loving tribute to 90’s platformer games. By cleverly combining elements found in Super Mario 64, The Legend of Zelda, Banjo-Kazooie, and even Pokémon, Poi has the potential to become an instant classic.

Growing up, I played countless Nintendo games on a multitude of systems. After diving into Poi, I can honestly say that no other indie game (minus the upcoming retro-inspired romp, -) manages to tap into my inner child quite like Poi.

The game looks straightforward and simple on the surface, but once you pick up a controller (or mouse and keyboard) and start running around for an hour or two, you'll find it rather difficult to go through the motions of saving and calling it a night.

opens up in a similar manner to The Legend of Zelda: Ocarina of Time meshed with a hint of Pokémon for good measure. Instead of becoming a Pokémon Master, however, you'll embark on an adventure to become a Master Explorer instead.

The kind old man in Poi just screams Pokémon's beloved Professor Oak to me, especially when I finished his opening speech and found myself selecting between a boy or girl Explorer. These two playable characters have no names, so feel free to call them whatever you wish.

After a few moments, I wound up picking the girl Explorer just to see if there were any distinct differences in play style between the two. Thankfully, each Explorer is identical to one another aside from their respective loading screen art.

Should you find yourself unhappy with the gender you picked, you can always swap characters later on, as the rejected character quirkily tags along on the old man's dirigible.

Despite the similarities in wording between "Trainer" and "Explorer" you're not roaming the world of Poi looking for monsters to capture. Instead, of you’re tasked with helping the comical old Master Explorer track down his lost Explorer Medallions. Oh, and his wife too, I suppose (he only mentions that she disappeared along with all his Medallions).

At the moment, there are an estimated 100 Explorer Medallions to find in Poi, so you don't have to worry about your adventure feeling too short.

The artwork used to tell stories in Poi is absolutely gorgeous, as are the loading screens. Poi's character backstory is hand-drawn, simple, and faintly resembles something you'd see in a Pixar film. As a fan of that art aesthetic, I can't help but admire the little touches and attention to detail that the developers have put into Poi.

Despite a solid design foundation, the gameplay elements are where Poi truly shines. They manage to walk a fine balance between being stripped-down while also remaining challenging and engaging.

There are platforms to climb, secrets to discover, and you can even rustle out some Rupee-like currency from tufts of grass. In what appears to be a nod to Banjo-Kazooie, the game includes warm and fuzzy places to explore, like Cozy Canyon and Crystal Cavern.

In Cozy Canyon, you'll find pink slime monsters (Poi's version of Goombas) and bucket-headed creatures. You defeat them by jumping on them, which both feels and looks remarkably satisfying. As you double-jump around the rock ledges and scalable buildings scattered throughout the map, you'll fall in love with Poi's classic platforming elements. They're just so wonderfully familiar and comfortable!

One of few the downsides I ran into had to do with the camera, which brings back memories of the eternal Super Mario Sunshine struggle. Whenever you traverse a wall, the camera has a penchant for zooming right up against it while pointing towards your character's backside. Although, this is an issue that has plagued 3D games all the way back to the early PS1 days.

The music fits the game perfectly, as do the random characters you encounter as you progress forward (like The Merchant). Collecting the 100+ Explorer Medallions in Poi can be a bit of a grind. Thankfully, the creative use of level design changes (like Cozy Canyon's use of the Flower Festival during your second run) helps prevent the game from ever growing stale.

Despite some of the wonky elements found in Poi, it has quickly become one of my favorite indie games. I regret putting the game off due to the preconceived notion that Poi was a children's title. I think the key art on Steam may be a bit deceptive in that it doesn't tell you how tricky Poi's platforming can be, nor does it convey just how close the game gets to its collection of 90's inspirations.

Poi has to be the most charming indie game I've played in quite some time. It's not perfect by any stretch of the imagination. However, it's a stunning achievement for an indie developed by two incredibly talented developers, Ben Gable and Paul Ewers. With so much love put into Poi, I can say with utmost certitude that the game is worth every penny of its purchase price. And then some.

This year seems to be harkening back to those retro platformer days in the best way possible, and I couldn't be any more excited. If you're on the fence about exploring the gorgeous world of Poi, I highly recommend you grab this cute platformer, as it serves as a wonderful tribute to the titles that spurred your love of gaming in the first place.

Check out Poi on Steam, or head over to the game's official website to learn more!