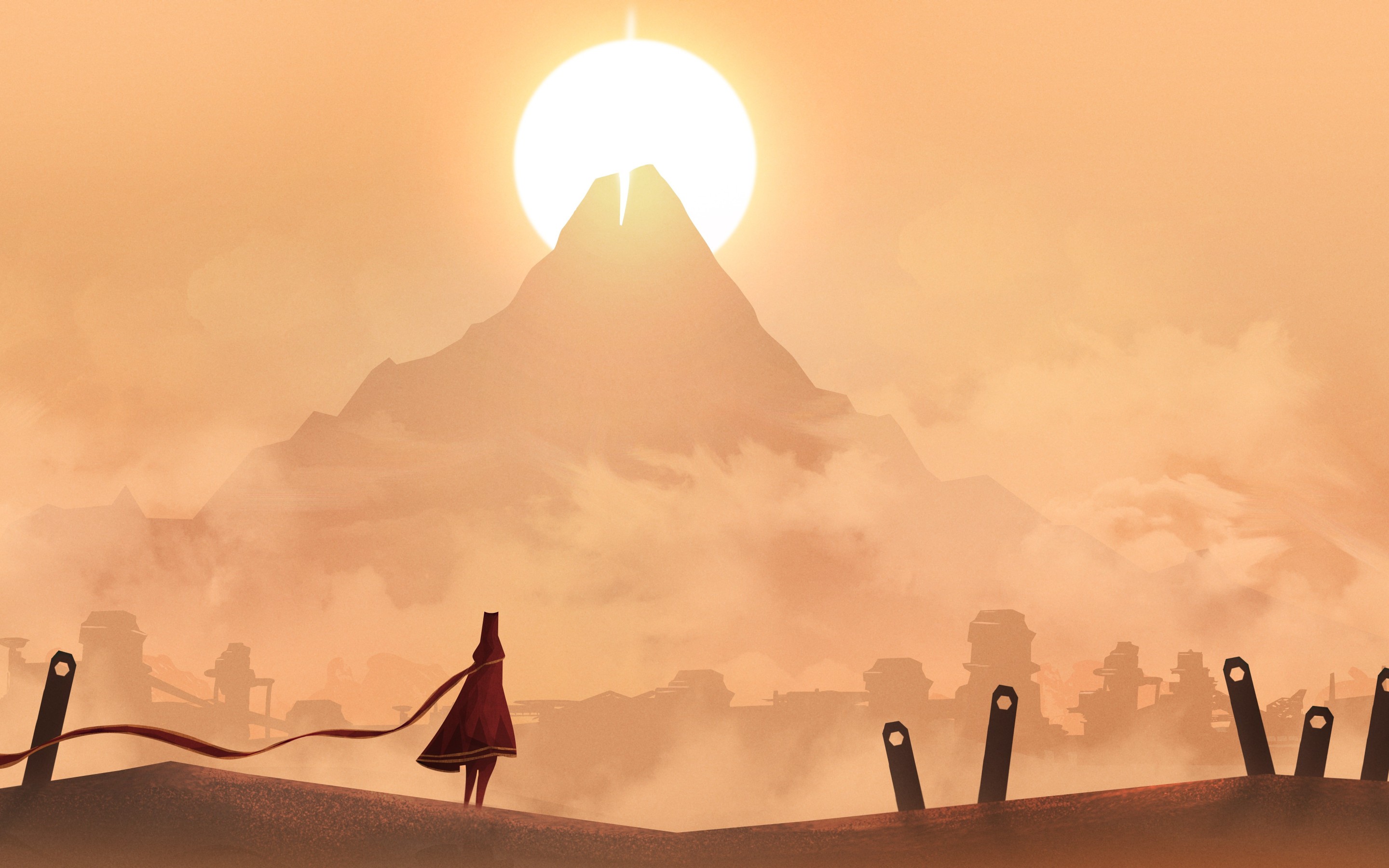 Why You Should Revisit Journey

Journey first released on March 13th, 2012 by developer Thatgamecompany. The independent team, who previously created meditative titles like Flow and Flower, brought Journey to life with a similar mindset. Upon release, it became one of the fastest-selling indie games to date on the PlayStation Store.

By the end of the year, it seemed as though everyone had embarked upon their own magical experience within Journey. Now, five years after its initial release, Journey is still widely heralded as being one of the most groundbreaking indie titles of all time. Yet it's a title that many fans of the game have only played once, despite its brevity.

On my first playthrough, I completed Journey as a solo venture. Awakening as a mute, faceless robed figure in a vast—and seemingly endless—desert, I drifted across the sands focused only on the story's ending rather than the story I was inadvertently creating. It was as if I was glancing over the strange ruins and fragments of moving cloth as placeholders, rather than pieces of a much larger puzzle.

You see, while the gameplay itself is relaxing and enjoyable, one of the most memorable aspects of Journey comes in the form of its multiplayer component.

The main reason for this is the silent adventure you embark upon with another player or players. There’s no dialogue, no cues, you simply stumble across someone in the game and either tag along or go your own way. Because of this, many players are choosing to revisit Journey once more, and are discovering new life within the game as 2016 comes to a definitive close.

I recently hopped back into the remastered version of Journey on the PlayStation 4 and was fortunate enough to encounter another player. Mentally, I assumed the game would be devoid of all human life considering the age of the original title. However, another user had decided to do exactly what I was doing… replay Journey for the second time. I learned this after completing the game, as your companion’s PlayStation username will pop up once you reach the illuminating ending and credits sequence.

Without hesitation, I sent a friend request to this stranger and inquired how many times they had played Journey in the past. “This was my second time,” they explained. It seems otherworldly to me that this stranger and I spent three hours together traversing the warm, golden sands of Journey’s landscape together

Not only that, but it was a familiar experience as we had both played the game previously. We knew where to go, we knew what to do, but we lingered within the game a little longer. It wasn't a grind to the end like my first playthrough. Instead, it was akin to a leisurely stroll with an old friend.

There’s no combat in Journey, no narrative, only the core experience of moving forward towards the mountain. Although you can certainly complete Journey solo, there's something inherently special about completing it side-by-side with another player. For example, the other player and I took refuge in a stone alcove while a giant monster sought us out.

When I was caught by the monster, my scarf shriveled to its original length. The other player surprised me by rushing back to make sure I was ok. They could have ventured on without me, but they chose not to. Why?

Journey presents an idea that still, to this day, doesn’t get utilized as much as I feel it should. The wordless, cooperative multiplayer experience brings you closer to people than games where you’re able to directly communicate via microphone or text chat.

As you play through the quiet, lonely landscapes in Journey you find yourself longing for company. And if you find another player, they become your lifeline.

Of course, I’ve made friends in games like World of Warcraft or even Chivalry Medieval Warfare. However, I’m able to know who those players are right from the start. It's more of a casual in-game friendship, one where I hop on Steam and send a quick "hey, what's new?" to my old Chivalry teammates before opening up my game of choice (often singleplayer). In Journey, you can only find out who you’ve spent your time with once everything is said and done.

The details aren't necessary when you're gliding across the sand dunes together. The "who" doesn't matter when you're constantly looking back as you race forward, checking to make sure they're still with you. requires you to see them, to watch them, in order to effectively connect and communicate. It's a natural human behavior that the developers harnessed perfectly.

You aren’t forced to finish the game with any players you encounter. Though, after exploring a few areas with a particular person, you’ll find that you can’t bring yourself to abandon them. Scored by the brilliant Austin Wintory, Journey is an example of a working concept comprised of several integral pieces.

The music makes up for the lack of dialogue, the multiplayer experience gives the game high replayability, and the core premise will linger in your mind long after you’ve witnessed the game’s moving climax. Overall, it’s not hard to become infatuated with Journey in a way. Whether it's your second playthrough or your twenty-fifth, those connections are always there, buried beneath the sand.

As the story unravels, you’ll surprise yourself upon the realization that the glass of water you wanted an hour ago? It’s just going to have to wait until you’ve finished the game. Even though you already know how Journey ends, the various connections you find in the game act as a driving force that gently nudges you forward. Just like the mountain that beckons your robed figure, Journey is a shining light that truly withstands the test of time.

For more on Journey here at Indie Obscura, be sure to check out some of our other features including the reveal of a new game from Thatgamecompany, a look at Journey's beautiful indie game soundtrack, and whether games like Journey can help treat the symptoms of depression.